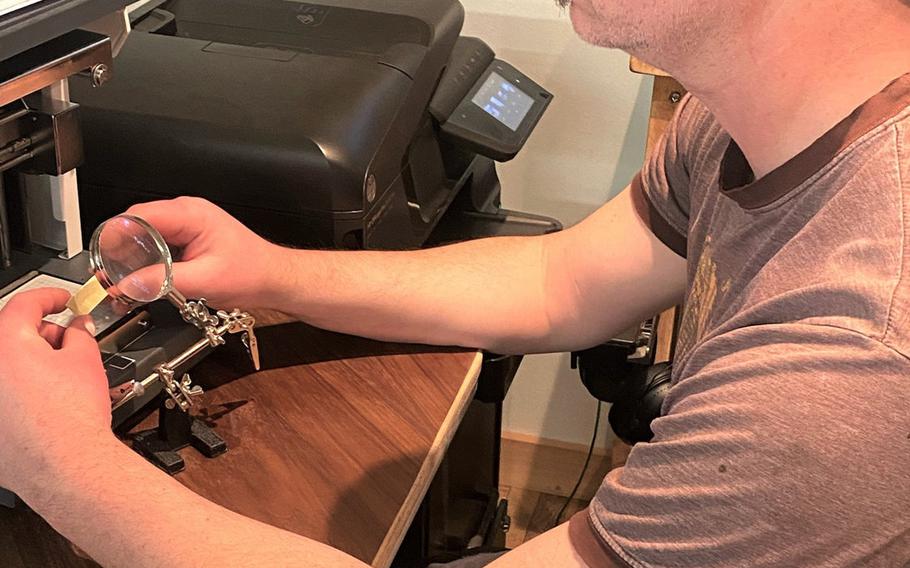 Former Army Capt. Andy Reed looks through a magnifying glass as he engraves a plaque to go on a presentation box for a first salute coin, April 28, 2021. (Andy Reed/firstsalute.com)

Former Army Capt. Andy Reed looks through a magnifying glass as he engraves a plaque to go on a presentation box for a first salute coin, April 28, 2021. (Andy Reed/firstsalute.com) 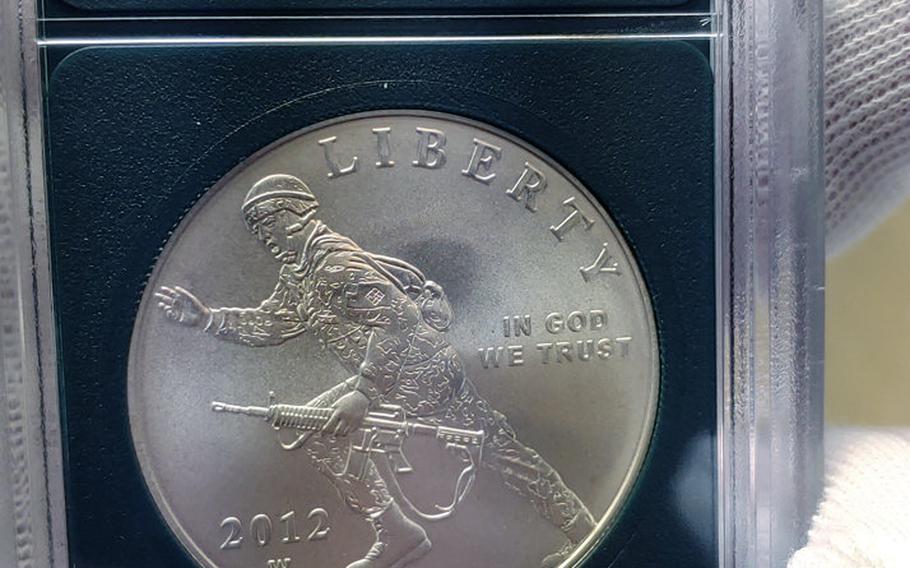 Former Army Capt. Andy Reed holds a silver coin in a presentation case engraved with the name of the newly commissioned officer who will present it to the enlisted service member who salutes him for the first time. The silver coin tradition is thought to date back to colonial times. (Andy Reed/firstsalute.com) 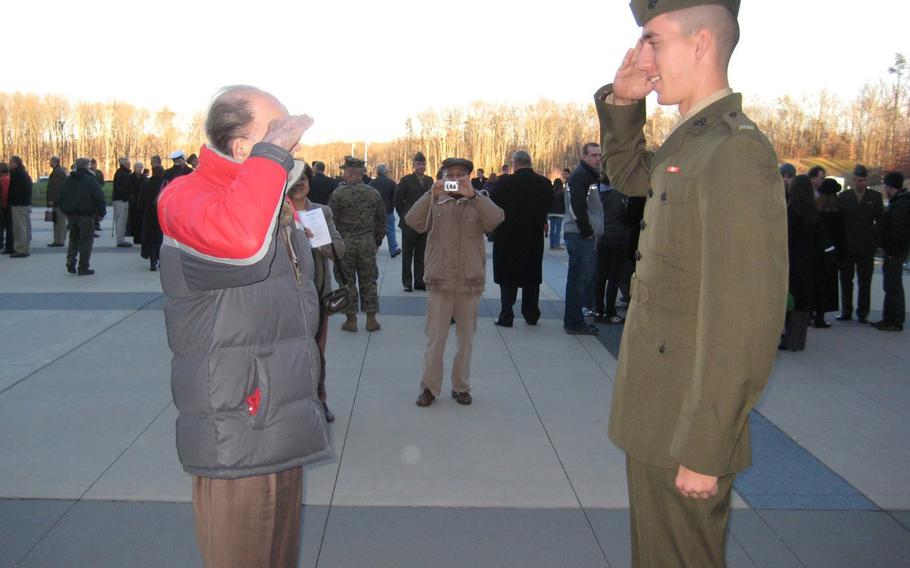 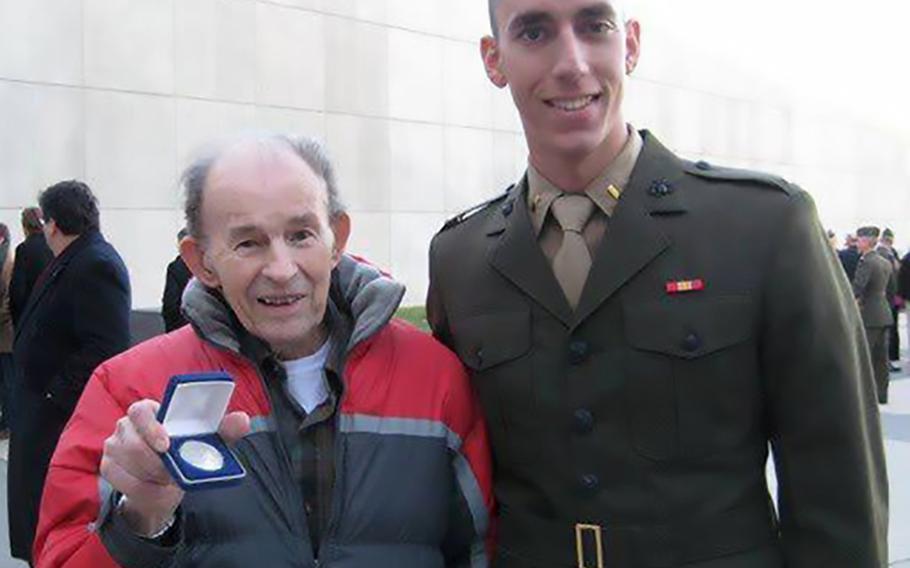 Jack Zovack, left, holds up the silver coin he was given by his nephew, then 2nd Lt. Patrick Weeks, right, at Weeks' commissioning as a U.S. Marine Corps officer at Quantico, Va., Dec. 11, 2009. Zovack, who served in the Pacific in WWII and in the Korean war, gave Weeks his first salute. (Marine OCS blog) 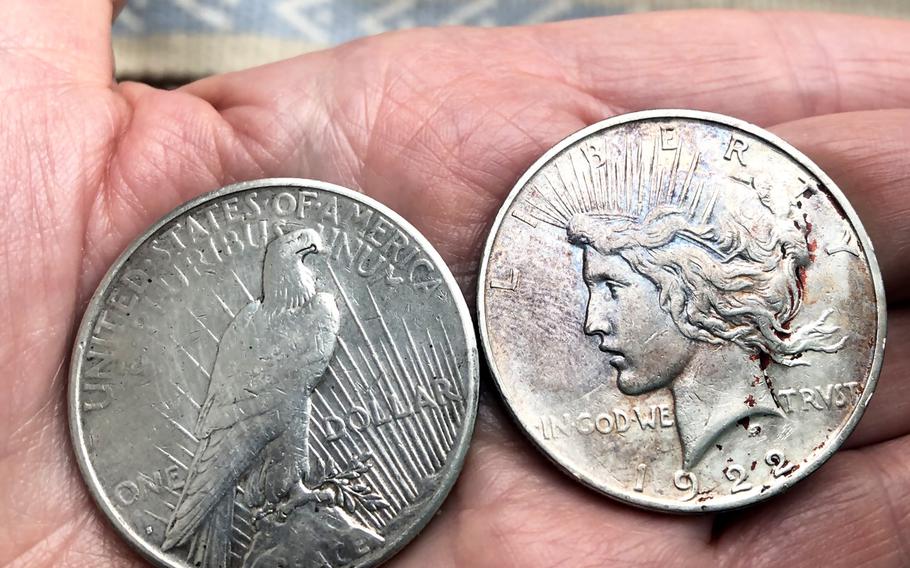 Buy Photo
The back and front of two silver dollar peace coins from 1922 and 1923. Peace coins are popular as the silver coin that newly commissioned officers give to the person who salutes them for the first time. (Karin Zeitvogel/Stars and Stripes)

A military tradition that goes back hundreds of years, involves at least two people and an exchange of money will play out thousands of times this month as newly commissioned officers hand a coin to the service member who salutes them for the first time.

The tradition is thought to date from colonial times, when new British officers would give a portion of their pay – reportedly $1 a month – to the lower-ranked sailor or soldier who advised them and taught them military customs and history.

But just as no one is certain of the tradition’s origins, many are unclear how it’s supposed to work today, when officers earn far more that $1 a month, silver coins are hard to come by and the military is much larger than it was 300-some years ago.

On a Facebook page for parents of soon-to-be commissioned service academy cadets, one mother asked if the person who gives the first salute has to be in uniform. Her cadet has chosen his grandfather, a Korean War veteran who no longer fits into his uniform, to give him his first salute.

An Air Force Academy cadet said she wanted to give her first salute to her late grandfather – although he is supposed to give it to her, which would be impossible.

A mother of one future officer said the coin must be 100 years old.

And parents have been told they had to attain a certain rank to be able to salute their son or daughter.

“I’m being told since I wasn’t an NCO, I don’t rate the privilege,” a father who served in the Gulf War said on Reddit.

But the first salute and silver coin traditions are just that – traditions, not regulations. The Army Officer’s Guide says “newly commissioned second lieutenants present a silver dollar to the first enlisted Soldier who salutes them,” but doesn’t say that the soldier has to be an NCO, a former ROTC instructor told the Gulf War veteran.

Former Marine Corps Capt. Patrick Weeks received his first salute in December 2009 from his uncle Jack Zovack, who was not in uniform.

“He was a Marine who fought in the Pacific in WWII and Korea,” said Weeks, who founded and runs the Marine OCS blog. “It was an incredible honor to have him be my first salute.”

The cadet who wants to salute her late grandfather should do so, said former Army Capt. Andy Reed, who commissioned in 2007 through the University of Oregon ROTC program.

“I have not heard of a posthumous first salute but, the way I see it, it is their day to honor their enlisted mentor, living or not,” he said by phone from Oregon.

An officer who received his first salute from his stepfather, who served in a segregated unit in Italy in World War II, gave a first salute to his son when he commissioned.

“A first salute from a lower rank? No. Still, it was real to us, and it’s on record as his first salute,” the father wrote on Reddit. “After he received his commission, he went to flight school to become a chopper pilot. His first ‘real’ salute came from the E-6 who greeted him at the front gate.”

Coins given to the first salute don’t have to be 100 years old, but they are supposed to be dollar coins with some silver content, Reed said.

“It’s a tradition, and I think it’s a good one, because the metal represents something timeless and of value,” he said.

Reed launched a website in 2012, firstsalute.com, to sell silver dollar coins and fill an information gap about the tradition. In 2007, when he was commissioned, he gave the NCO who gave him his first salute a plain dollar coin.

“I only learned afterward that you’re supposed to use a silver dollar and years later sent him one to make up for the cheesy coin I gave him,” Reed said. Most dollar coins minted after 1964 contain no silver, he said.

Reed is spending six to eight hours after working at his full-time day job, preparing coins and presentation boxes for soon-to-be officers to hand to their first salute later this month, when the service academies and many ROTC programs commission new officers.

“Some do one salute and present a coin during the ceremony, and when they receive their first salute from a stranger, they also present them with a coin,” he said between engraving coins and boxes late into the night, for last-minute orders.

“It’s a big deal,” he said. ”It can only happen when you first become an officer.”