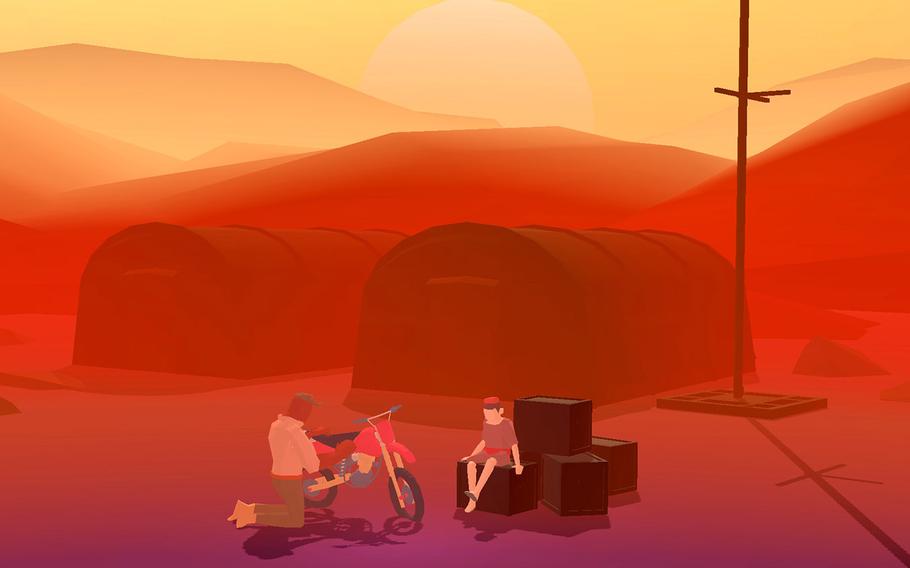 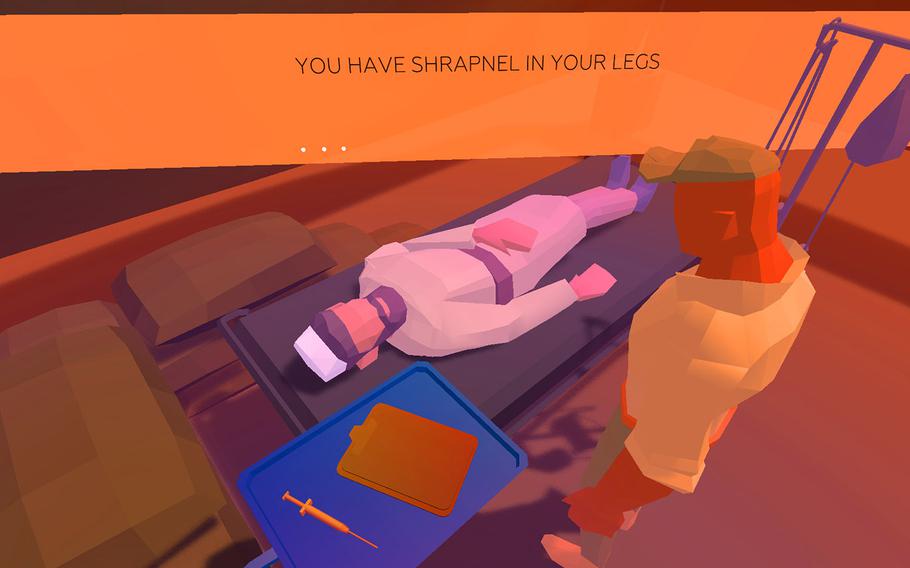 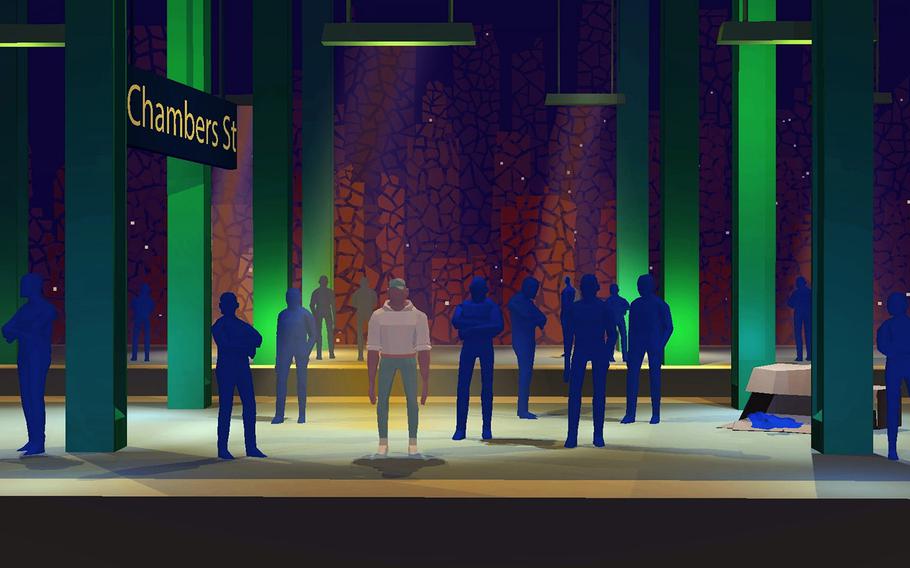 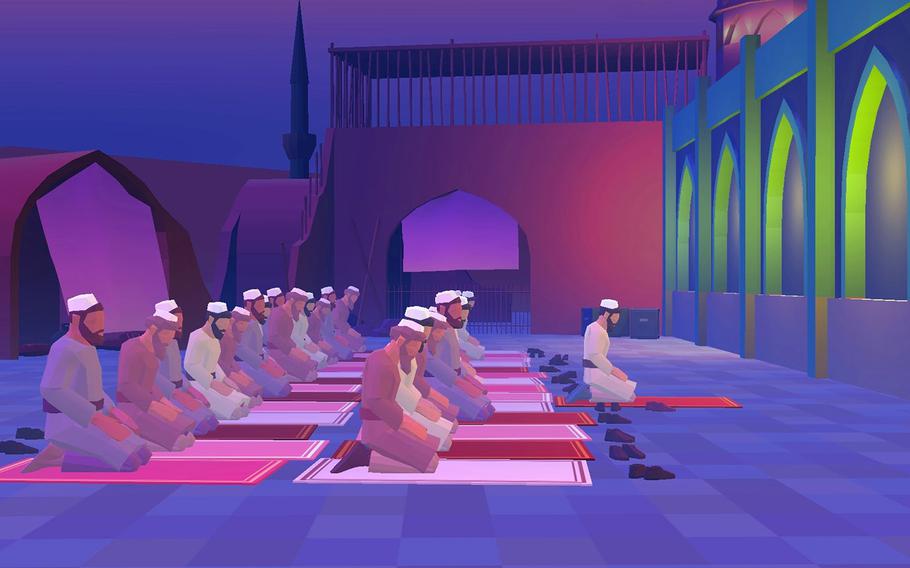 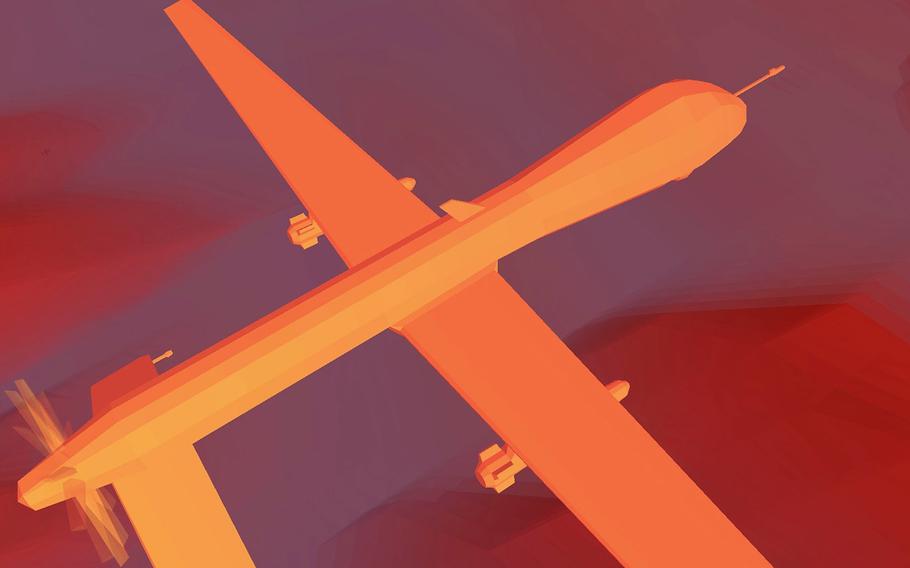 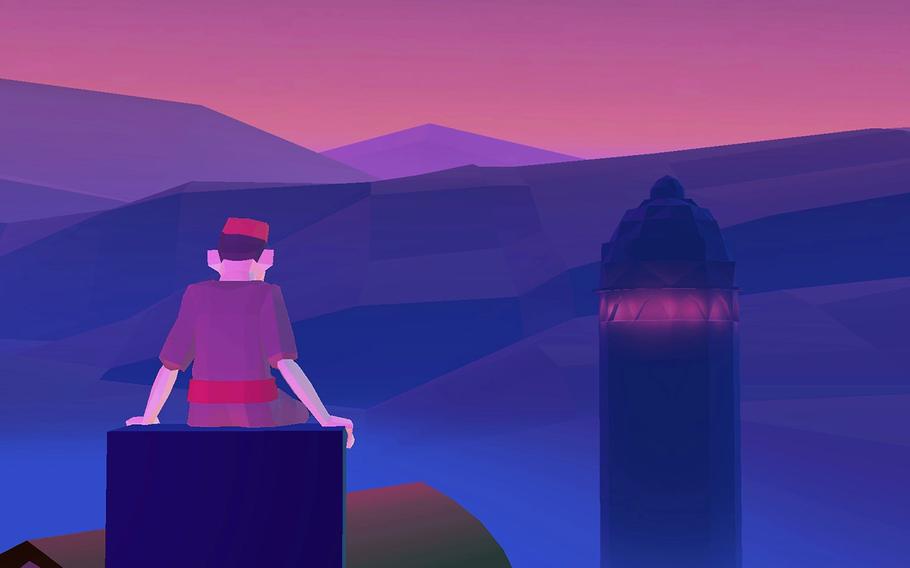 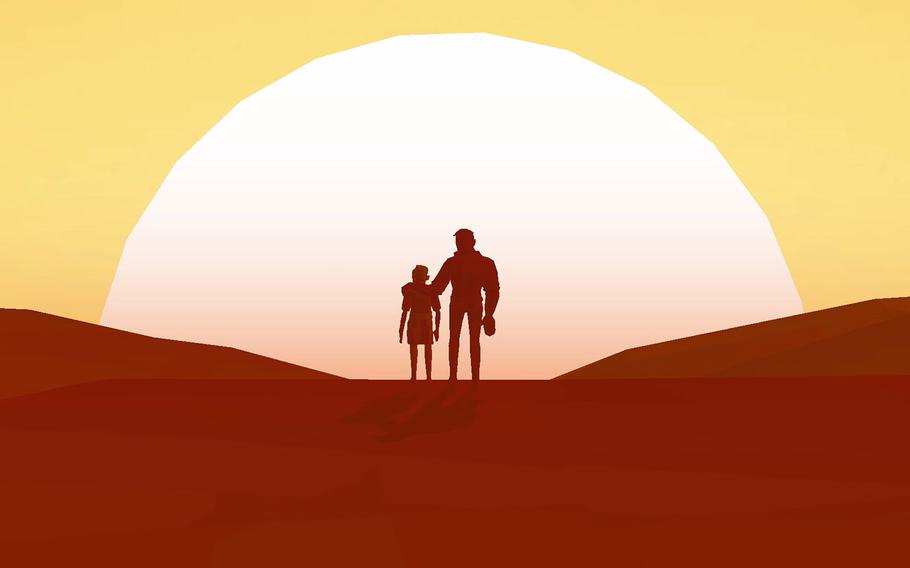 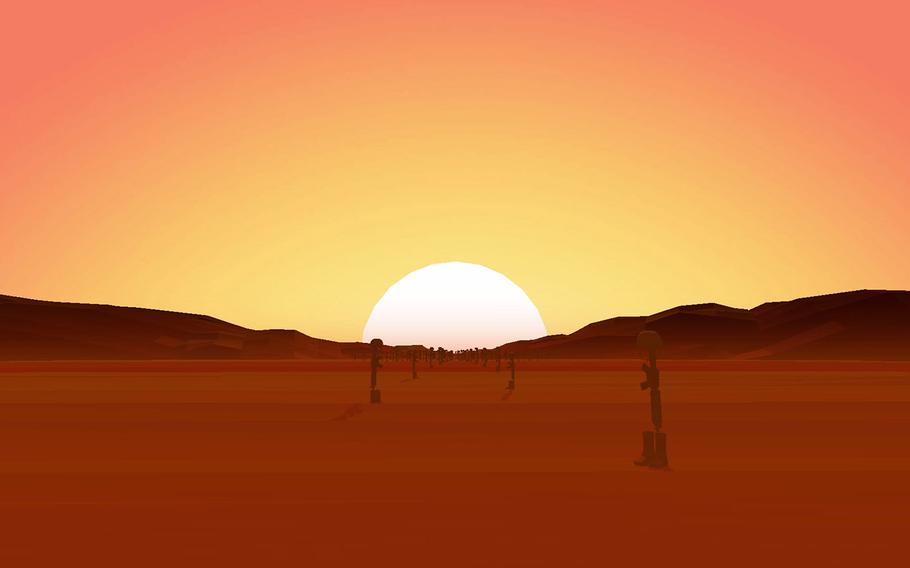 When you think of war in video games, the strongest associations are to the testosterone-filled first-person shooters of the modern era. “Call of Duty,” “Battlefield,” “Counter-Strike” — games that go through great pains to depict the ferocity and excitement of battle, while leaving the emotional consequences out of it (try as they might with the addition of dogs).

If indie game developer Horse Volume gets its way, games might be able to take war storytelling to a new level. Lead developer Ty Underwood sat down with Stars and Stripes for an interview about his project “The Sun Also Rises,” which vows to explore the human interactions and emotional toll of the Global War on Terrorism.

After an initial promotional trailer showcased a “Journey”-inspired visual style — with a bright, vibrant color palette, cel-shaded characters, and a dialogue system seemingly in the same vein as “The Walking Dead” or “The Wolf Among Us,” we were intrigued. But like any early game (Underwood says this one will take a year to complete), much of the finer details were quite fuzzy. That’s why we decided to go directly to the Horse Volume’s mouth, so to speak, to try and nail down what exactly a “different type of war game” looks like, and more importantly feels like.

We got Underwood’s thoughts on the current state of mainstream war games, the complications of telling a story about a conflict that’s ongoing, and how a narrative with passive multiplayer could help better reveal the complicated nature of war.

Editor’s note: The questions and answers in this transcript have been edited for clarity and length. See the full video 25-minute interview, with details on the Horse Volume team, Underwood's prior projects and more details, above.

Stripes: Hello, thanks for joining us. Let’s dive right into the first question that’s going to pop into anyone’s mind when they try to Google this: Why “The Sun Also Rises,” and can you compete the Google index ranking for the Ernest Hemingway novel?

Ty Underwood: (Laughs) The name has interesting thematic connections to some of the same things Hemingway was doing. And also, the sun imagery. We were both interested in the Bible quote that the name originally came from in Ecclesiastes. But so far, if you look up “The Sun Also Rises trailer,” we’re starting to beat out a BBC movie that came out 20 years ago.

What are your thoughts on the way mainstream, AAA war games present conflict?

Just like there’s room in the world for crappy action movies, I think there’s room in the world for crappy action games. Not crappy in the sense that they’re bad, but their stories are pulpy, and show a very dramatized idea. A little bit of hero worship, a little bit of escapism. That’s fine, but there’s some work to be built on — like “Spec. Ops: The Line” [where] there’s a little bit of bait and switch. It presents itself as the shooter, where it’s brown, kind of action-y, but it kind of pulls the rug out from under you. There’s been a couple of games in the past that kind of do that sort of thing, they comment on how games work. And in a lot of ways, we’re building off that evolution, and taking a more literary push into it.

What we’re trying to do is take the interviews and discussion that we’ve had with people and filter them through this narrative lens and through the lens of academics, and turn it into this engaging story. That’s the thing that games haven’t done before.

You’re interviewing war veterans for this project. How do they inform the story? Will there be direct representations of their stories in the game, or will it be used to color a completely fictional world?

There’s a range. Some things that we’ve written into the story have happened to people literally, and some things are more of a coloring. One of the characters is an infantry combat medic from Helmand province, in southern Afghanistan. In that case, we talked to a bunch of people doing that job in that area, so we have a really good collection of what that experience was like for those guys. That’s a more literal approach in that case.

One guy [we interviewed] wrote fan fiction. We want to take snippets of that and put those things here and there in the world. Just the interesting things about personalities and things, without betraying their identity or private conversations and things like that.

The game’s visual style seems to call back to something like “Journey,” especially the scene of memorials toward the end of the trailer. What’s the idea behind the visual style? How much do you expect it might change?

There’s a really old game called “Another World” that one guy made. [It’s] this interesting sort of vertex kind of angular game. That was a visual inspiration that was really interesting. As far as the color palette goes, we’re really looking at traditional Afghan and Pakistani art — taking a lot of the textiles and vibrant cloth work — and working that into the whole world.

We’re paring down the details of what you see when you play the game because we’re trying to focus on composition and gesture — all these specific ways that people communicate. So getting rid of dirt textures, wall textures and detailed facial features helps it stay more focused.

It could change quite a bit. We’re not trying to limit ourselves. We like where it is right now, but we aren’t 100 percent sold on every single aspect of it. if the game requires it, we could change any part of it.

Do you have any non-gaming influences when it comes to storytelling?

Aside from primary sources, we have a stack of documentaries to get through. we looked at Restrepo and a follow up just in theaters called “Korengal.” “The Invisible War” struck me, it was extremely moving. That movie is about sexual assault survivors, how they dealt with the systems in the military and the problems and successes they had with that. That’s something we’d like to explore, since games are about systems and a lot of times games are about empowering the player through systems.

We’d like to see what it’s like to for someone to be in a position where they system in some cases is visible and not there to benefit them. And that’s a feeling that’s hard to feeling to capture in any other media than a game. We do want to seriously take a look at how people in those system and can feel disempowered and and they kinds of things they do or feel in those situations. I’ve seen a lot of fiction about the war, but we’re mostly looking at documentaries and novels and their primary sources.

Have you found it strange or difficult to tell the story of a war that’s ongoing?

The farther we are away from anything in history, the easier it is to focus on the broad strokes. Kind of do what historians call “great man history” — focus on particular players and make it a neat package. Since we’re in the middle of the war right now, it’s far from a neat package. It’s very confusing and complicated. But that allows us to focus on the very tangible individual stories within the conflict — because those have not been lost to time yet.

The game’s main mechanic seems to hark back to something like that of a Telltale game. Is that accurate? What are your main influences on this project when it comes to gameplay?

I’m a big fan of Telltale games, and that kind of (narrative style) goes back to the first “Fallout” game. The first “Fallout” had a cool good balance between narrative mechanics and combat mechanics. The way the games have (evolved), the combat mechanics of “Fallout 1” are totally polished and different … (but) the dialog mechanics work almost the same. Maybe that’s because they work very well for that game, but for us, that’s not enough.

Telltale did something interesting where they put a timer on it and you have to make a decision really quick, or they’ll make a decision for you. That’s interesting, but I want to expand on that by making a dialog system that doesn’t just present choices.

We’re focusing on something that’s more stream of consciousness and something that will allow you to interrupt people or not understand somebody or have to talk in gestures instead of speech if you're not 100 percent on the same language page as other people. Sometimes your gestures are misunderstood from the way that you meant them. We’re iterating on that.

There’s a lot of things going on there, but one of my main inspirations is a little known renaissance of interactive fiction. Some of the ways they’re tackling text interaction is really cool. They usually fall in the spectrum into the weird and arty side of things.

“Journey” had a really cool passive multiplayer system, where you just existed with other people through your journey. We came up with our own kind of passive multiplayer. When someone plays the game, some of their decisions are saved in the cloud. When the next person plays the game, that changes how people react to them throughout the world and change their experience.

A good example would be if a woman in Afghanistan has had certain kinds of dealings with soldiers, either good or bad, that’s gonna completely change how she responds to or how she helps the next platoon that walks by. We’re systemizing that a little bit by making it a passive multiplayer where previous people who have played the game kind of haunt the game for you, and you [will haunt] the next person.

Will players know when they’re interacting with a character who has been influenced?

You’ll know sometimes, and sometimes you’ll just wonder if someone else made the game this particular way for you. One of the stories we’re looking at is the life and work of a CIA analyst in the modern world. A lot of what they do is about tracking different people's movements and behaviors and communicating that to (soldiers) in the field. There’s a lot of opportunity for confusion and miscommunication.

Tell us about your Kickstarter campaign.

One of the major reasons we’re doing it is so we can do better research and interview people from Afghanistan; for instance, nationalized Afghan interpreters who come over to the US who would be interested in talking to us.

Some people ask us if we’re going to show both sides. It’s not a two-sided thing; it’s a very complicated, fractal thing. We’re looking at getting as many perspectives as we can. That requires a little bit of money to travel and talk to people. And we’re also looking to fund our development in the incubator to get the game done fast and at the highest level of quality that we can. So we’re looking for people who believe in the project to come and pledge and back us early on.

Right now we’re saying 2015. That’s based on talking to other developers, and it looks like the game could take up to a year, but likely be less than that.

To stay up-to-date on the Kickstarter for "The Sun Also Rises," check out the the game's website.