In Washington, remembrance and resilience on anniversary of Sept. 11 attacks 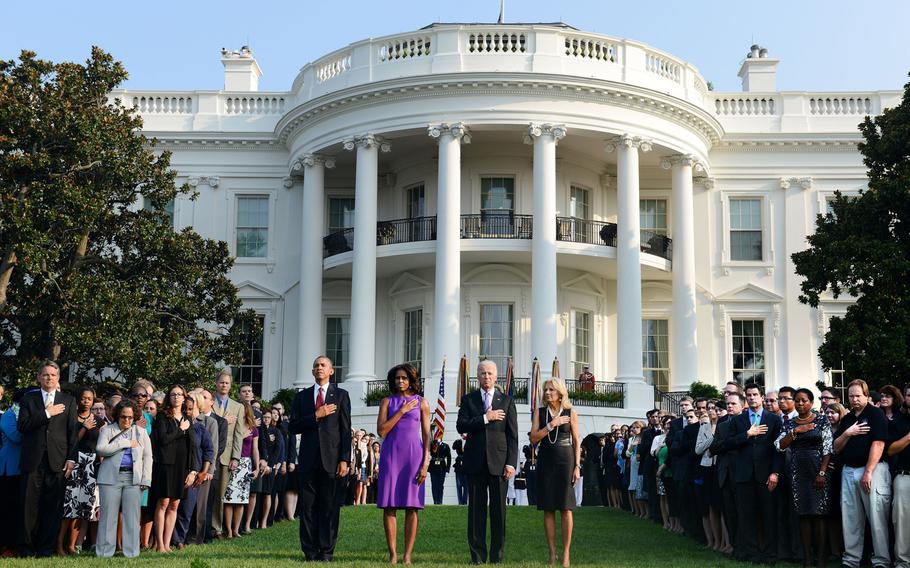 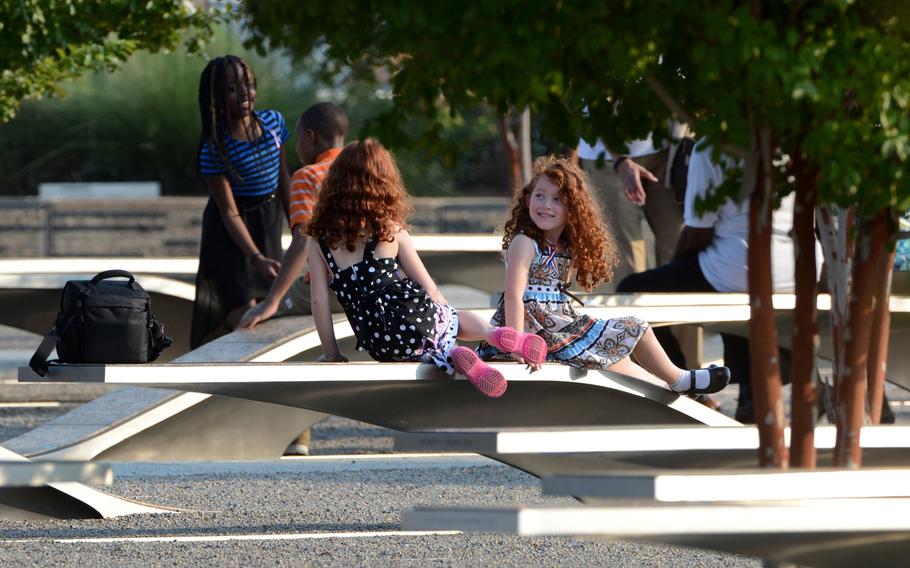 WASHINGTON — Republican and Democratic lawmakers stood shoulder-to-shoulder Wednesday, united if only briefly, to observe the 12th anniversary of the Sept. 11 terrorist attacks that killed 2,977 Americans and for a time threw the capital into chaos.

Members of both chambers gathered on the west steps of the Capitol overlooking the National Mall to pay tribute to those killed at the World Trade Center in New York City, the Pentagon in Washington, and in a field in Shanksville, Pa., when the fourth airliner hijacked went down after passengers rushed the hijackers. It was believed to have been headed for the Capitol; a memorial plaque now hangs just off the Capitol Rotunda with the names of the deceased from that flight.

President Barack Obama and Defense Secretary Chuck Hagel began the day’s remembrances at the Pentagon. Earlier, on the South Lawn of the White House, Obama observed a moment of silence at 8:45 a.m. — the time the first plane crashed into the World Trade Center in New York.

“They left this Earth. They slipped from our grasp… But what your families lost in the temporal, in the here and now, is eternal … Even more than memorials of stone and water, your lives are the greatest tribute to those that we lost.”

At the Ground Zero memorial in New York City, officials hoisted 30 American flags in memory of civilian paramedics and firefighters who died on Sept. 11, 2001, as well as U.S. military servicemen who have died in the following wars in Iraq and Afghanistan.

On Wednesday, the attacks also accomplished what has been a near-impossible task in recent years — it united Congress. Both Senate Majority Leader Harry Reid of Nevada and GOP Leader Mitch McConnell of Kentucky recalled hearing of the attacks on that morning in 2001, and how they were hurriedly evacuated from the Capitol as U.S. intelligence officials learned of the threat to the building. Later that day, congressmen gathered on the west-side Capitol steps to sing “God Bless America” at the suggestion of Sen. Barbara Mikulski, D-Md., as they saw smoke continuing to billow from the Pentagon in the distance.

It was on those same steps that congressmen gathered for Wednesday’s 25-minute ceremony.

“Today we bow our heads in solemn remembrance of a devastating time in our nation’s history,” Reid said. “But we also raise our voices in celebration of America’s spirit of perseverance.”

McConnell said the terrorists may have succeeded in killing the innocent, but failed in their true objective.

“On a clear September morning, we found ourselves suddenly under attack from an old enemy with a new and fearful — carriers of the innocent had been converted into weapons of war,” McConnell said. “Everything changed on that saddest of mornings, and yet so much still remained the same… The (terrorists’) fondest hope was that we would cower in fear and abandon the practices and principles that distinguished us from them. But we did not cower.”

House Speaker John Boehner, R-Ohio, recited a passage from the Book of Isaiah before obliquely addressing tensions in Syria, as Congress continues considering authorization for a military strike.

“The word ‘weary’ has been used a lot lately, but remember those who charged up those stairwells and who charged that cockpit. The prayers that were whispered together. The last word that comes to mind is the word ‘weary,’” Boehner said. “Yes, we’ve been through the crucible, and we live in a dangerous world. But from the fallen, and from all who have sacrificed so that we may live free, we can take heart that ours is the greatest cause, and the work before us is not beyond our capacity or beyond our strength. After all, we are Americans.”

The memory of the 2001 attacks infused nearly every moment of congressional business on Wednesday, beginning with the Senate’s morning prayer, led by Senate Chaplain Bill Black. Black repeated his prayer at the memorial ceremony.

“In this hour of trying times, through the terrorist attacks, you helped us become more aware of our vulnerability as a nation, to better appreciate the heroes and heroines that emerged during seasons of crisis, and to discover how the worst of times can bring out the best in all of us,” Black said in his prayer.

Reid said Wednesday morning that he and McConnell are continuing to negotiate “a way forward” on the issue of a resolution authorizing President Obama to use military action against Syria in retaliation for an Aug. 21 chemical weapons attack that is believed to have killed 1,400 Syrians. Obama addressed the nation on prime-time TV on Tuesday night, and Secretary of State John Kerry is expected to meet with Russian officials on Thursday in Geneva to consider a Russian proposal for Syria to turn over its chemical weapons to be destroyed.