In Arizona desert, the Army prepares to fight much faster aided by artificial intelligence 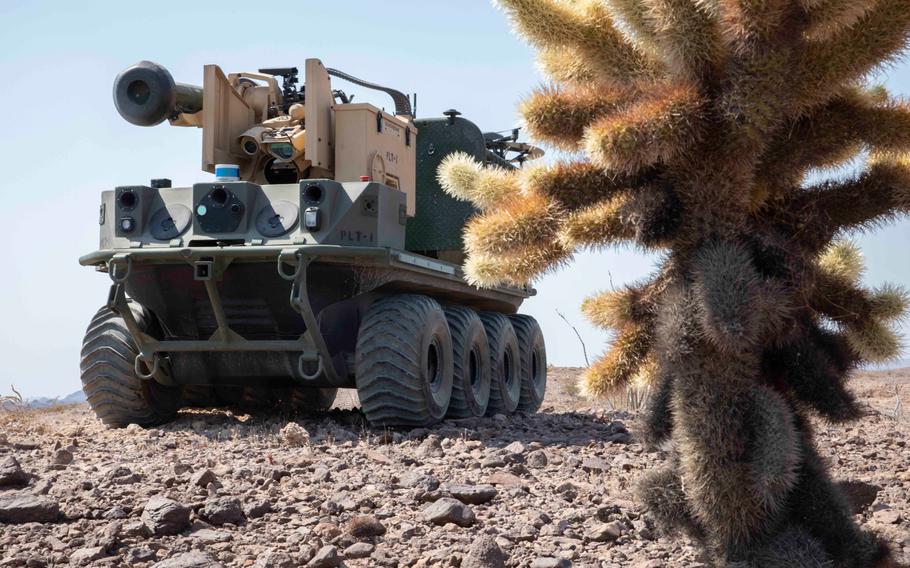 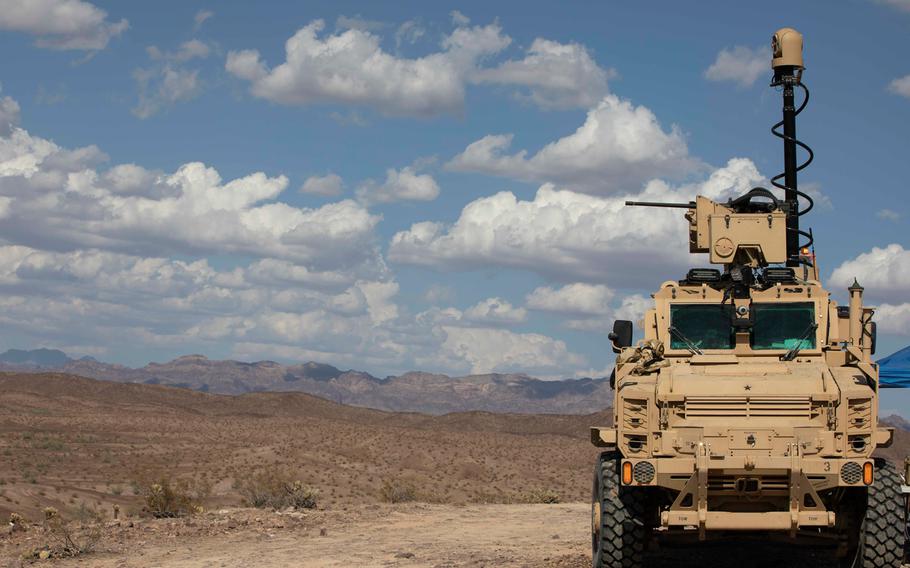 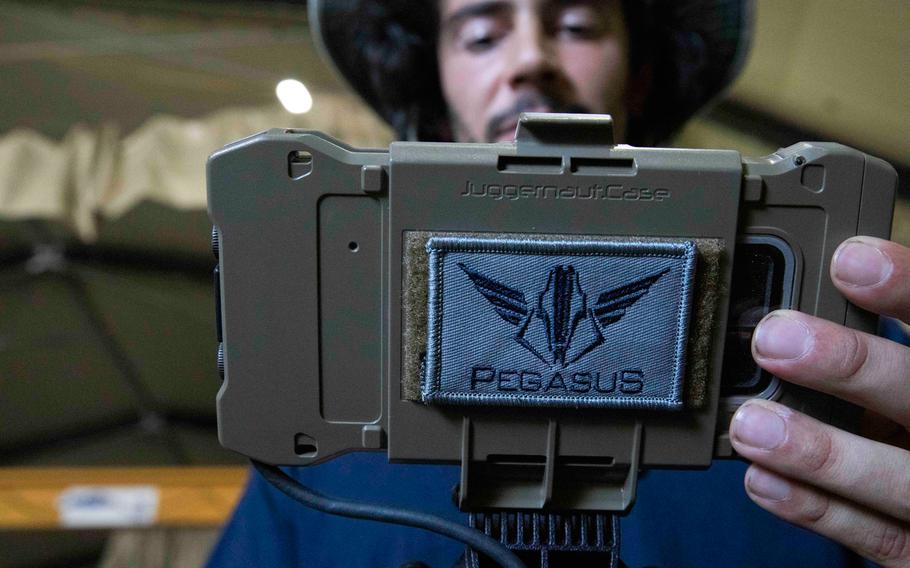 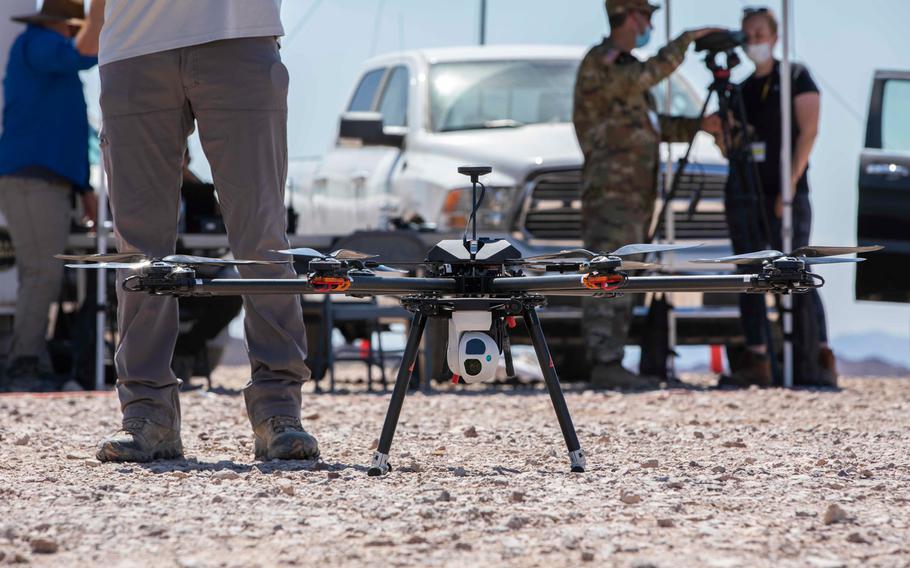 YUMA PROVING GROUND, Ariz. —To win a fight against a foe with similar weapons and capabilities, the U.S. military’s ability to find and strike that enemy must become exponentially faster, and at this austere weapons testing range in southern Arizona, the Army is leveraging new technology to do just that.

With a room full of top officers from the Army and all of its sister military services watching Monday, Army Brig. Gen. Ross Coffman led demonstrations illustrating precisely how the service intends to slash its targeting process from tens of minutes to tens of seconds. Coffman, who for the last six weeks has run the Army’s Project Convergence at Yuma Proving Ground, said the key is new technology — artificial intelligence — that can gather and process massive streams of data faster than teams of humans ever could.

In a series of tests Monday, intelligence-gathering sensors on space-based satellites, low-flying drones and military ground vehicles located mockups representing enemy air defense systems, tanks and other hostile targets spread across the Yuma desert range. The sensors relayed the target information to computer systems, which then identified the target and determined the best means to kill it — long-range artillery, a drone-fired missile, traditional mortar rounds or machine-gun fire.

In one demonstration, sensors on a low-Earth orbit satellite spotted an object, which was determined by an artificial intelligence program called Firestorm to be an enemy air defense weapon. Firestorm then prioritized that target as necessary to destroy, and recommended long-range artillery — in this case, a self-propelled Howitzer cannon — to shoot. At that point a human finally became involved in the process: A commander made the ultimate decision to strike, and the soldiers in the cannon fired. The entire process took less than one minute.

Project Convergence is the Army’s answer to learning to fight the conflict that top Pentagon officials have long feared could be their next major war — a high-end conflict stretching across multiple domains against a near-peer competitor that boasts advanced weaponry. The program aims to provide the technology to command and control operations and assets across all of those domains — land, air, space, sea and cyberspace.

The program, run by the Army’s Futures Command, features elements from most of the Army’s critical modernization efforts — including programs aimed at producing the next generations of long-range artillery, Army helicopters and unmanned aerial systems, ground combat vehicles and the communications network — to link everything. Ultimately, it hopes to link all of those capabilities via a massive network of sensors ranging from outer space to front-line soldiers’ combat kits.

As important as those modernization programs are to the service, Gen. Mike Murray, commander of Army Futures Command, said Wednesday that Project Convergence might be the most critical ongoing effort within the Army, outside of protecting its soldiers on real-world battlefields today. He believe it could drive change at a level the service has not seen in four decades.

Like other key Pentagon programs, Project Convergence is driven by the 2018 National Defense Strategy, which places power competition against China and Russia as the preliminary threat to America’s national security. Both emerging powers have invested heavily in recent years in military power, and possess technologies that could challenge U.S. battlefield supremacy.

FirestormThe critical link powering Project Convergence is an artificial intelligence platform called Firestorm, which Coffman and other Army officials described as the brains behind the quick-targeting process.

Firestorm is the computer system that absorbs data from the military’s sensors, processes it and provides its results — essentially targeting recommendations — to the Army commander for decision-making about identified targets. It also gathers terrain and other data to provide soldiers with a common picture of the battle space, to help them work together to target enemies, avoid detection and avoid airspace collisions, Coffman said.

That technology could prove to be the Army’s real “game-changer” for how the United States conducts war, said Gen. Joseph Martin, Army vice chief of staff, who traveled to Yuma on Monday to witness the Project Convergence tests.

“Firestorm is to multi-domain or joint all-domain command and control as the wheel is to transportation,” Martin said Monday. “It will give us the ability to decide faster than any adversary and apply the full power of the Joint Force in all domains. That's what I walked away with today.”

Like a human, Firestorm learns enemy weapons systems and other information through repeated exposure. Its algorithm finds characteristics of items that its sensors detect in a battle space and decides with confidence if that item is a target — a specific model of an enemy’s tank, for example. It then identifies for the commander which asset of all the weapons available is the best to use to destroy the target, considering all of the conditions in that moment.

In the future, Martin said, it could link an Army commander with Navy destroyers at sea or with Marine F-35B fighter jets to launch critical attacks in less than 30 seconds.

Coffman said the system could keep soldiers safer on the front lines, because it could allow autonomous drones or ground robots to engage with the enemy forces. It could allow the military to conserve ammunition, by picking the most likely weapon to destroy a target in as few shots as possible, he said. It may also allow soldiers to remain concealed from the enemy longer, as other platforms fire on a target instead of those front-line forces.

“So technology is allowing us to pair the best shooter to eradicate the targets, allowing our most effective killers to go after the highest priority target,” Coffman said. “And when you can do that, you go from tens of minutes to tens of seconds. Now you can make decisions faster than your enemy. And they're reacting to you rather than you reacting to them.”

The human elementThe Army is committed to ensuring the ultimate decision to pull a trigger, to fire a missile or drop a bomb, is made by a human.

“There will always be, when you have a lethal decision, a human involved,” Murray said Wednesday after the second Project Convergence demonstration at Yuma.

Army leaders believe artificial intelligence will enable humans to make quicker, better decisions. But technology, like humans, is not infallible.

The technology remains a prototype and is years from reaching the Army’s operational combat units. U.S. soldiers training around the world today are focused on perfecting the tactics they would need to fight a near-peer adversary, but they are doing so with proven, but often dated, technology, Martin said.

It could be a decade before soldiers on a rotation at one of the Army’s key combat training centers are using a technology like Firestorm.

“They're fighting with what we have,” Martin said. “We incrementally have introduced different mission command capabilities, different technologies, different weapon systems. But what we saw [Monday] is prototype technology, not sufficiently at a level of maturity … to start building a program, and we're not there yet with that.”

Martin, the Army’s No. 2 general, said he wished his career would last long enough to see the technology arrive in those soldiers' hands.

“I wish I had 10 to 15 more years in the Army to see this through personally, because this is the direction we're going,” he said. “We’ve got to get there, [and] it’ll be a lot faster than that, but just think about how quickly technology’s evolving. This is incredible stuff.”