How big should the Army be in 2018? No one in Washington agrees 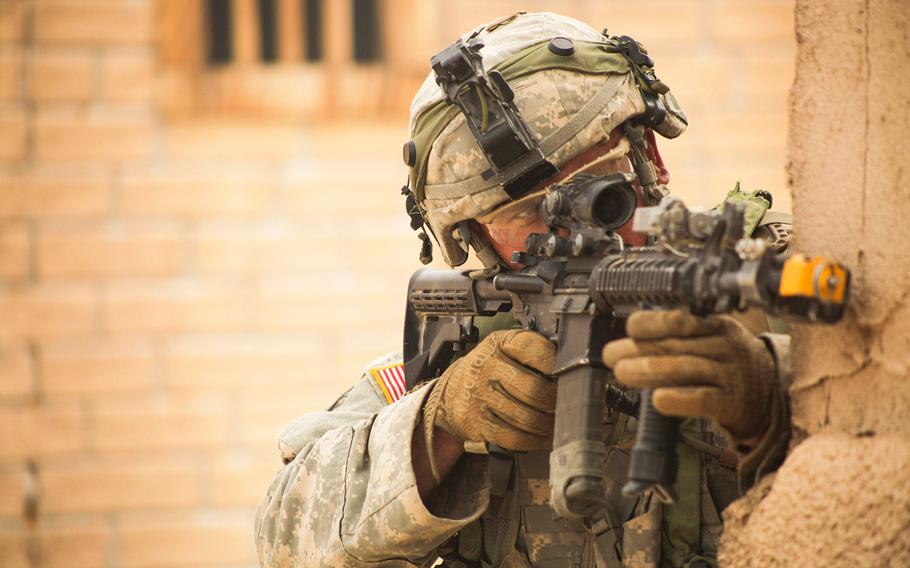 A soldier with the Mississippi Army National Guard provides security during an exercise at the National Training Center in Fort Irwin, Calif., on May 30, 2017. (Dana Clarke/U.S. Army )

WASHINGTON — Lawmakers in Congress want to increase the size of the Army in 2018, but the House and Senate disagree on how many more soldiers the service should add next year.

The House Armed Services Committee on Wednesday approved its $625 billion version of the National Defense Authorization Act for fiscal year 2018, calling for the Army to add 17,000 soldiers. Yet the Senate Armed Services Committee’s $640 billion version of the bill only adds about 6,000 soldiers to the service. The White House does not want to expand the Army next year, proposing in its $575 billion budget that the service stay steady at its 2017 size of about 1,018,000 soldiers across active and reserve components.

The differing proposals could set up a fight over the Army’s force strength in the coming months as Congress works to finalize the massive defense policy bill to fund the Pentagon.

The House’s addition of 17,000 soldiers – 10,000 to the active force and 7,000 to the National Guard and Reserves – matches what the Army included in its $3.1 billion unfunded requirements list submitted privately to Congress to guide lawmakers on additional needs not requested in President Donald Trump’s official budget proposal. Nonetheless, Gen. Mark Milley, Army chief of staff, told lawmakers in early June that improving combat readiness across the force was more important in the near future than expanding the size of the service.

Milley said he would only want the additional soldiers if Congress also provided enough funding to ensure they were properly trained and prepared for war.

The general’s remarks resonated with the Senate Armed Services Committee, staff officials with that committee said Friday. They described the senate’s moderate addition of 5,000 active-duty soldiers and 1,000 reservists and National Guard members as a “responsible rate” of growth that would allow the service to plug holes in existing units. Expanding too rapidly could be problematic for the force, the officials said. They spoke on condition of anonymity to discuss the Senate Armed Services Committee’s version of the defense bill, which has not been released to the public.

The Senate panel was concerned that adding 17,000 more soldiers to the force next year could force the Army to reduce its recruiting and retention standards, a problem the service faced in the past as it scrambled to boost its size at the heights of the wars in Iraq and Afghanistan.

“No one wants to see the Army allowing anyone who can’t meet the current standards into the uniform,” one of the officials said. “That is not a place we can afford to go back to.”

Despite promises to boost the military, Trump only called for moderate force increases in his first White House budget revealed in May. He proposed adding about 4,000 troops to the Navy and the Air Force, but none to the Army or Marine Corps.

The White House and Pentagon has said Trump’s promised increases to the military force size, including the Army, would begin with his fiscal year 2019 budget.