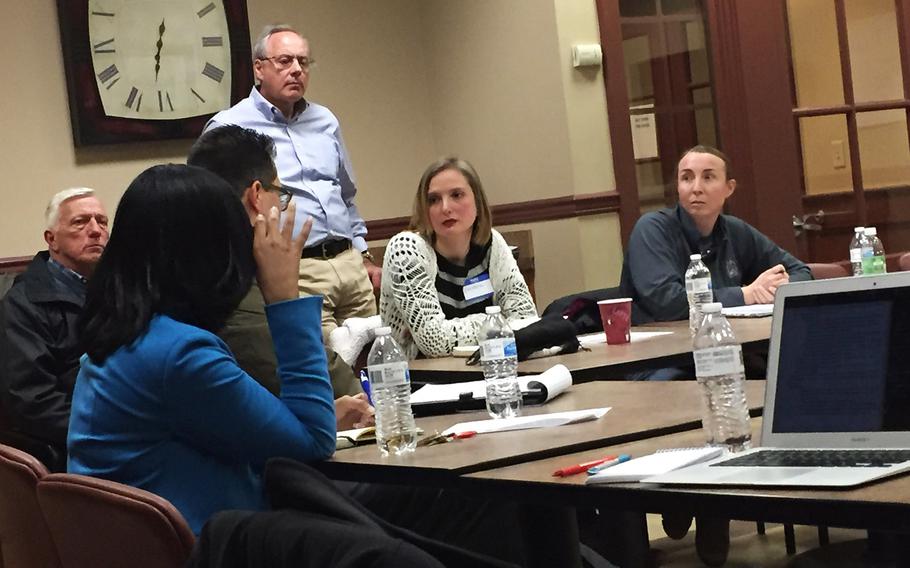 Residents of military housing participate in a group forum at Fort Meade, Md. The monthly forums provide feedback about housing at the Army base to military leaders and officials for Corvias, the private company that manages the housing. The in-person meetings now offer a call-in option because of the coronavirus pandemic. Corvias recently ended its participation in the group meetings, which have been ongoing since January 2019. (U.S. Army)

Corvias, the company that manages base housing at Fort Meade, Md., has halted its participation in discussions with residents about their concerns with its housing at the Army base because company officials said some families are using the talks to advance a lawsuit.

Corvias and Fort Meade housing leaders started the focus group with residents in January 2019 following a Reuters news investigation that exposed the poor conditions of base housing managed by private companies across the country.

Corvias and Fort Meade officials said they have found the focus group to be productive in allowing residents to air housing concerns and provide feedback on the effectiveness of the company’s response to improve housing conditions on base. But in recent months, Corvias said the tone has changed because there are some group participants who are part of a lawsuit against the company that claims the housing on base exposed their families to toxins that caused ongoing health problems.

“Unfortunately, it has recently become apparent that some of the participants in the focus group have tried to use this forum, not as a means to enhance the experience of the community as a whole, but to advance their individual demands for monetary compensation,” JC Calder, operations director for Corvias at Fort Meade, wrote in a November email to the focus group.

These type of resident engagement opportunities arose at military bases across the country following news reports that began two years ago and exposed the sometimes dangerous conditions found in family housing on military bases. Many families spoke up about exposures to lead paint, asbestos and black mold, as well as pest and rodent infestations and water leaks that were all exacerbated by slow or ineffective maintenance and repairs.

The majority of base housing in the United States is managed by private companies, such as Corvias, and at least five of those companies now face lawsuits from military families who list a myriad of ongoing health problems that they believe were caused by toxic exposures in base housing.

Ten families at Fort Meade filed a lawsuit in November 2019 against Corvias, primarily related to mold in homes. Other bases where families have filed lawsuits that are pending include MacDill Air Force in Florida, Joint Base San Antonio and Fort Hood in Texas, Camp Pendleton in California, and Fort Bragg and Camp Lejeune in North Carolina.

While one Marine Corps family at Camp Pendleton won a lawsuit in 2019 against Lincoln Military Housing, a group of 14 families at Keesler Air Force Base, Miss., lost their lawsuit against Hunt Military Communities in November when a federal appeals court denied the case.

At Fort Meade, the monthly resident focus group began as an additional line of communication between residents, Corvias and base leadership. Open to any resident, the in-person meetings now offer a call-in option, because of the coronavirus pandemic.

“Regrettably, we cannot support the inappropriate use of the focus group meetings by individual litigants to pursue their personal monetary claims, and have not been able to identify a way to continue to participate in a productive way given these circumstances,” Calder wrote.

Benjamin Block, partner at Covington & Burling LLP and lead attorney representing the Fort Meade families who filed the suit against Corvias, said it is “very disappointing” that Corvias ended participation and blamed these families.

“But, sadly, it is not surprising. Our clients had the courage to come forward to vindicate the rights of all military families living in Corvias housing on Fort Meade. Corvias' latest action confirms that it still has no interest in transparency or accountability, choosing instead to retaliate against those who bring these issues to light. Our servicemembers and their families deserve better,” Block said.

Corvias declined to comment on the matter, but in the email, Calder wrote Corvias “vigorously” contests the claims in the lawsuit.

Outside of the focus group, Fort Meade officials also broadcast housing discussions every other Thursday on the base’s Facebook page and maintains a hotline for housing concerns. It will also continue to host the focus group without Corvias, said Lt. Col. Stephen Ward, commander of the Garrison Command Headquarters Battalion.

“It’s important that we continue to ensure that the residents are being heard. That they have a voice and that they have a connection. Just because the meeting goes away or restructures, it doesn’t mean their problems or concerns go away,” he said.

Focus group meetings have maintained participation of five to 15 residents each month, according to Ward and meeting minutes posted online. Discussions in early meetings focused heavily on mold remediation and work orders, including feedback that directly improved a smartphone app that Corvias launched last year for residents to track maintenance requests.

With the app, Ward said the group was helpful in sharing with Corvias on how to make the product more user-friendly, especially when a work order required multiple appointments with maintenance staff.

“The focus group helped us dialogue those things. They were able to provide that feedback and then we tried to work with Corvias on ways to improve the app,” Ward said. “If it’s not usable then no one is going to use it and we are back to square one.”

Over time, the conversation has shifted to what he called, normal neighborhood concerns, such as people leaving their trash cans out too long after pickup, causing them to blow into the street.

“You can see the natural progression of discussion topics. We identified the major problems,” he said. “It shows that the group is addressing problems. Because we’re able to tackle bigger issues, we’re able to continuously modify things like the app, now we can talk about next level of things to address.”

Any issues that arise in the focus group that pertain to Corvias, Ward said he will take to their staff during his weekly meetings with the company.

In his email, Calder wrote the company has appreciated the group’s efforts during the last two years to improve the Fort Meade community.

“Corvias remains focused on hearing from, engaging with, and supporting our residents in the most productive ways that we can in order to ensure that all residents can be heard and issues can be resolved,” he wrote. “We look forward to resuming our participation in the focus group in the future.”