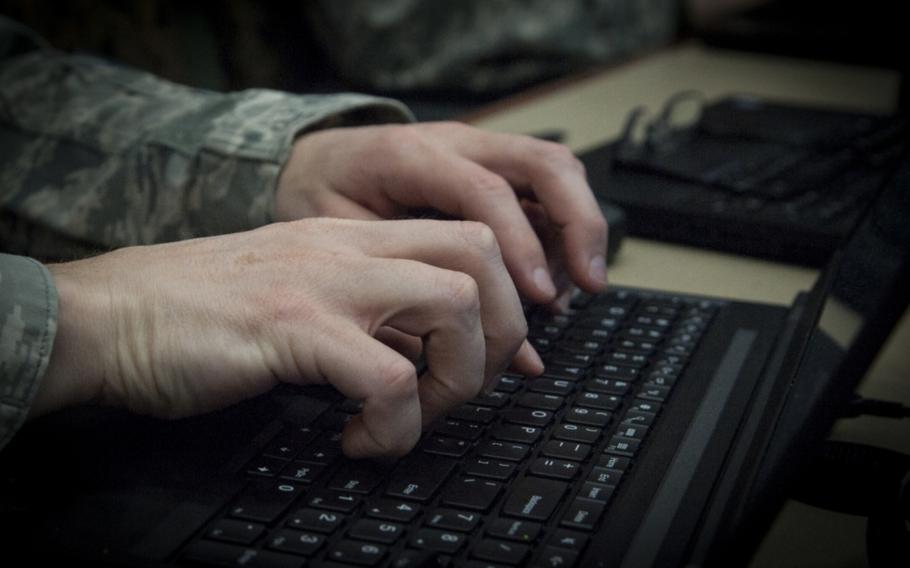 An airman types on his computer during the Cybersecurity Foundry Course at MacDill Air Force Base, Fla., March 9, 2018. (Mariette Adams/U.S. Air Force)

The committee chairman, Rep. Mark Takano, D-Calif., announced the investigation. In a statement, he said foreign actors are using “shadowy practices” to disseminate false information to servicemembers, veterans and their families.

“Our veterans served in uniform to guard against threats to our democracy just like those posed by these internet bots and trolls intent on sowing division and spreading misinformation,” Takano said. “Congress has a responsibility to stamp out these anonymous individuals and protect our country from threats foreign and domestic.”

The committee is in a fact-finding stage and is planning to hold meetings with stakeholders about the issue.

Democrats, who now control the House, are focused on increasing transparency, accountability and “finding ways to protect democracy,” said a committee staff member who spoke Tuesday on the condition of anonymity.

“This is a theme running throughout the party right now,” the staff member said.

Vietnam Veterans of America has investigated the issue since 2017, when the organization discovered a Facebook page using its name and logo. The page posted politically divisive posts and was followed by nearly 200,000 people – tens of thousands more than the official VVA page.

Kristofer Goldsmith, associate director for policy and government affairs at VVA, discovered the page in mid-2017. Since then, he’s worked to shut down more fake accounts that target veterans and servicemembers with disinformation.

Goldsmith argued Monday that foreign trolls were targeting the military and veterans community to “weaponize and turn a profit off our patriotism.”

“Veterans organizations have been forced to play defense against a deluge of anonymous overseas actors who work day and night to deceive Americans — stealing our names, logos and reputations to gain their trust,” Goldsmith wrote in an editorial published in Military Times.

Goldsmith said Tuesday that he’s “basically been playing a game of whack-a-mole,” in which he identifies an imposter account and has it disabled, only for it to be created again under a new email address.

During the past several months, Goldsmith has been updating House Democrats about his efforts. He shared with them more than 100 pages of notes and thousands of screenshots.

“Doing it alone has been overwhelming, frankly, so I’m glad to know that [the committee] is going to be helping with this,” he said. “It’s a huge relief that at least I have somebody else’s eyes on this stuff.”

A study from Oxford University in 2017 found Russian operatives used Twitter and Facebook to disseminate “junk news” to veterans and servicemembers.

Researchers with Oxford’s Project on Computational Propaganda, which is studying how Americans were affected by disinformation campaigns during the 2016 presidential election, found trolls and bots targeted military personnel and veterans with propaganda, conspiracies and hyper-partisan political content. The population of veterans and servicemembers contains “potentially influential voters and community leaders” because of the trust the public places in them, the study states.

Though the issue has the attention of the VA committee, Goldsmith argued the FBI needs to become involved to track and identify the people behind the fake accounts.

“I believe an investigation by the FBI is appropriate,” he said. “Until we find the people behind the avatars and impose a cost on them, they have no incentive to stop.”