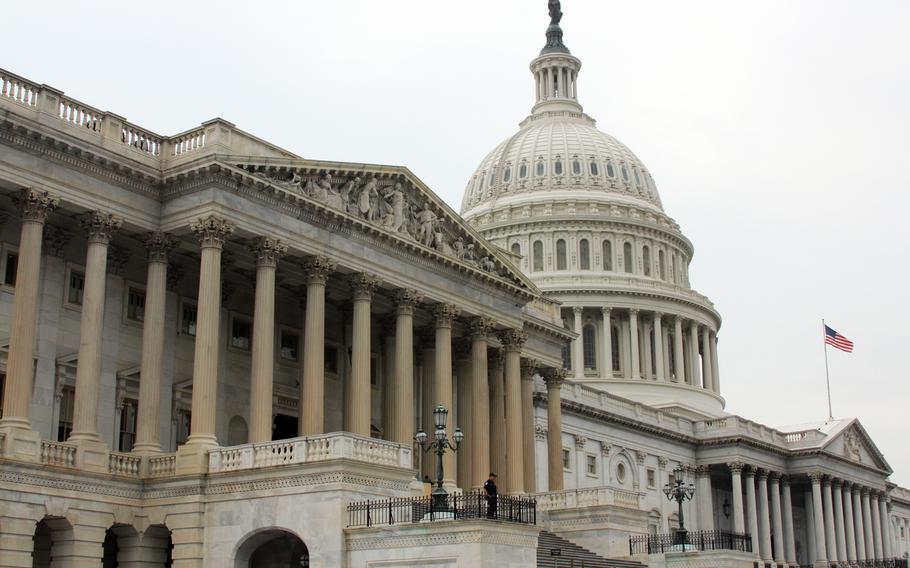 WASHINGTON — The U.S. House voted quickly and overwhelmingly late Thursday to stamp its approval on both a bipartisan budget deal and a new, $632.8 billion defense bill for the current fiscal year, speeding both onto the Senate for expected passage next week.

Shortly after 6 p.m. on the eve of adjourning for the rest of the year, representatives voted 332-94 — a vote total yelled out happily by Speaker John Boehner (R-Ohio) — for a two-year federal budget that will set spending at $1.012 trillion for the 2014 fiscal year and $1.014 trillion in 2015. The deal cuts $23 billion from the federal deficit and restores $63 billion in past spending cuts caused by sequestration. The Pentagon will see a total of $30 billion of that restored over the next two years.

Republicans and Democrats came together on the vote, with both sides saying they didn’t get what they wanted. Democratic Minority Leader Nancy Pelosi of California reportedly had told her caucus to “embrace the suck” when considering the deal, and Rep. Paul Ryan of Wisconsin, the 2012 Republican vice presidential candidate, reminded the House of his defeat in a floor speech just moments before the vote.

“I tried to defeat this president. We did not win. I wish we did. But until we win some elections and can actually govern, we’re going to have to live with divided government,” said Ryan, who chairs the House Budget Committee.

Immediately afterward, the House voted 350-69 for a $632.8 billion defense bill — the National Defense Authorization Act — that will keep the military funded through the current fiscal year.

The bill contains a 1 percent pay increase for servicemembers, continues the war in Afghanistan and blocks military base closings for at least the current fiscal year.

The bill does not contain either of two competing proposals to reform how sexual assaults are handled in the military, but it does contain more than two dozen other reforms to improve how such cases are handled by the military justice system.

A controversial proposal to ease restrictions on transferring detainees from the U.S. military prison at Guantanamo Bay, Cuba, is in the bill, but there is also a House prohibition on transferring such prisoners to the U.S.

Passage of the bill is considered critical, because a variety of special pay provisions for hardship or hazardous duty are set to expire on Dec. 31. Early this week, House and Senate Armed Services Committee leaders announced an agreement to expedite the process for the bill.

Both pieces of legislation now move to the Senate, which still has one more week before it is scheduled to adjourn Friday, Dec. 20. The chamber has been locked into a procedural tussle over judicial nominees and the chamber’s filibuster rules, but that is expected to ease sometime during the weekend, and passage of both the budget and defense bill are expected sometime next week.

At the Pentagon, Defense Secretary Chuck Hagel issued a statement Thursday applauding the budget deal and noting that he personally called Ryan and his Senate counterpart, Budget Committee chairwoman Sen. Patty Murray of Washington on Wednesday night to congratulate them on their work.

“The deal they reached reduces the impact of sequestration cuts and provides the Department of Defense with greater budget certainty, which is important for us to be able to plan effectively,” Hagel said.

“While this agreement doesn't solve every budget problem facing DoD, it will help address our military readiness challenge by restoring funding for training and procurement — especially in fiscal year 2014. The Department of Defense has been warning about the impact of sequestration's steep, deep and abrupt cuts for months, and I'm pleased that Congress has been willing to work in a bipartisan manner to limit its worst impacts.”

“This legislation continues our effort to rebuild a military that has been tested by a decade at war. It upholds the unwavering tradition of Congressional oversight, while providing support to the warfighter and value to the taxpayer,” he said.

As for the budget, McKeon said it “will provide our military with some near-term relief from sequestration and give them the ability to plan for the next year and a half.

"However, I remain concerned that the new baseline for defense spending remains insufficient to meet future national security challenges while we restore our force after over a decade at war,” McKeon said. “At such a constrained resource level, the Department of Defense will be forced to make tough choices in the years ahead that will continue to affect readiness, modernization, and put our military and national security at greater risk.”

Both the budget deal and the defense bill were compromises, with Democrats decrying the fact that the budget deal does not extend unemployment benefits — which expire on Dec. 31 — and that federal workers hired after Dec. 31, 2013, will have to contribute more to their retirement funds. Senate Majority Leader Harry Reid, D-Nev., has said the unemployment benefits will be taken up in January.

Military advocates are left wanting by the budget, too: Veterans who retired from the military before age 62 will see a reduction in their annual cost-of-living benefit increase.

Those cuts have infuriated veterans advocates, who have vowed to fight the plan in the waning days of the 2013 legislative session.

In a letter to Congress and the White House on Wednesday, members of the Military Coalition — 33 veterans and military advocacy organizations — called the proposal “an egregious breach of faith” driven by “an arbitrary deadline so that Congress can go home for the holidays.”

Officials from the Military Officers Association of America estimated that the proposed 1 percent cut in the annual inflation calculation for retiree pay will cost a typical enlisted member $83,000 over 20 years and a typical retired officer more than $124,000 over the same span.

Still, Senate Democrats at a news conference Thursday vowed to press ahead with approval of the budget and defense bill next week.

Also Thursday, in a conference call with reporters, a panel of defense budget experts said the Pentagon’s budget still will drop in future years, although officials there seem to have avoided worse scenarios.

Russell Rumbaugh, a senior associate and director of budgeting for foreign affairs and defense programs at the non-partisan Stimson Center, said the deepest cuts to DOD have been softened by being spread out over multiple years.

"The most important thing is that it significantly softens the drop in defense spending — the key word there is ‘softens,' " Rumbaugh said. "Really, the defense budget is still going down to the same low point it was previously going to go down to, it’s just now not going to do it for a couple of years."

Because the defense budget will be basically flat for the next four fiscal years, however, Rumbaugh said it will actually be falling because of inflation.

“Unfortunately, because of the corrosive effect of inflation, ‘flat’ really means the defense budget is coming down. So in real terms, it’s still going to end up at the same low point it was scheduled to hit in FY 14, but now it doesn’t get there until FY 16. All of which means the budget is slowly but surely eroding.”

But what the Defense Department got in the new numbers, Rumbaugh said, was stability — knowledge of how much they will have to spend for the foreseeable future as they navigate new projects, programs and changes.

“The longer that cuts are spread out, the easier it is to get there,” he said. “This should allow them to do good planning and give themselves a rational plan to get to the bottom.”

The budget deal was an unexpected breakthrough — not only is it a two-year deal instead of one, but it ignores the conventional wisdom that the forced federal spending cuts known as sequestration were here to stay. Rather, it restores the money that Pentagon leaders had said they desperately needed if the nation’s military were to maintain its readiness and capability.

Without the deal, the agreement reached in October to end the 16-day government shutdown and avert a debt ceiling default would have ended, risking another shutdown and automatically triggering tens of billions of dollars in sequestration cuts as mandated by the 2011 Budget Control Act. The Pentagon itself would have lost as much as $50 billion. Ryan credited Pentagon officials with heavily influencing the budget negotiations and restoring at least some of the spending cuts.

Many House conservatives still voted against the budget deal, prompting a rare, public pushback from Boehner in complaining that tea party-affiliated groups had criticized the budget deal before it was even announced.

"I'm as conservative as anybody around this place," Boehner said. “All the things we've done in the three years I've been speaker have not violated any conservative principles, not once. (But) when you criticize something and you have no idea what you're criticizing, it undermines your credibility."

Chris Carroll and Leo Shane contributed to this report.