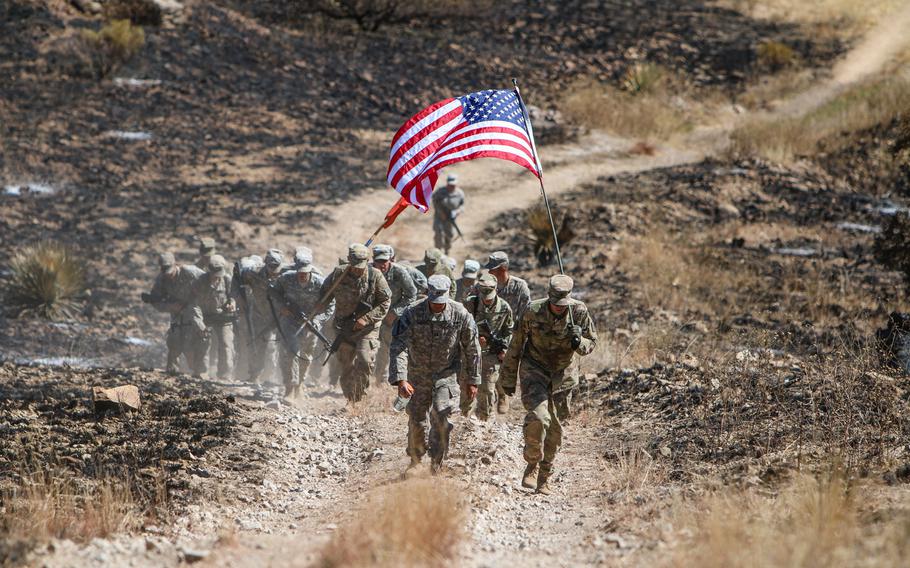 WASHINGTON — A House committee approved the highest military pay raise in nearly a decade, boosted troop levels across all services and authorized funding for new weapons and equipment as part of a marathon hearing on the next defense policy plan.

After more than 12 hours of debate, the House Armed Services Committee approved the massive legislation just after midnight Thursday morning in a nearly unanimous vote of 60-1. The lone no vote came from Rep. Tulsi Gabbard, D-Hawaii. The plan marks an early stage of the 2019 National Defense Authorization Act, or NDAA, which will be debated numerous times before final approval.

“This bill takes the crucial next steps to rebuilding our military and reforming the Pentagon. Our nation owes the men and women who serve the best equipment, the best training, the best support that it can provide,” Rep. Mac Thornberry, R-Texas, chairman of the House committee, said in opening the hearing’s debate Wednesday morning. “We have not given them our best in the past and we are seeing some of the consequences of that failure.”

The plan, which also includes an extension to special pay and bonuses for servicemembers and new ships, planes and other acquisitions, was the center of the House committee's “markups” hearing to approve the next NDAA, or H.R. 5515, which directs policy and spending plans for the Defense Department.

The hearing considered about 400 amendments to the bill.

The proposed NDAA would install new policies toward creating a Space Command and would proceed with a plan that could trigger aggressive cuts at dozens of Defense Department support agencies.

The hearing was marked by tight votes and extensive debate on a series of controversial issues tied to proposals from President Donald Trump, from expanding the country’s nuclear weapons cache to funding a southern border wall to holding a military parade.

Democratic efforts to shoot down those proposals all failed.

“We love parades, but let me tell you from one soldier, we don't like parades,” Rep. Anthony Brown, D-Md., an Army veteran, argued in an effort to restrict the parade to just ceremonial units and equipment. “They take a lot of work. We look good when we are in parades and ceremonial formations because we spend an outsized amount of time preparing for them.”

In recent weeks, the House Armed Services Committee, its subpanels and Senate counterparts have held dozens of hearings to discuss the 2019 budget and policy priorities for each of the branches as well as a wide-ranging list of challenges facing the military, including an unrelenting readiness crisis that has resulted in a series of deadly aviation and ship crashes.

Among the recent proposals, the House’s NDAA also endorses a Thornberry effort to cut 25 percent in spending from dozens of Defense Department agencies known as the “4th Estate.”

Originally, Thornberry said his plan would eliminate seven of the agencies, but he reduced that list to the Washington Headquarters Service, which provides administrative support.

“I backed off all of them except (the Washington Headquarters Service), the biggest growth, the most redundancy,” he said. “Surely, we can do this.”

The House panel’s NDAA appears to build on momentum to grow the size and might of the military in response to China and Russia’s growing capabilities as laid out in Trump’s $686.1 billion defense budget proposed earlier this year. The proposal was poised to get a receptive response on Capitol Hill with a deal already in place to bust budget caps and a Congress invested in military improvements during an election year.

Thornberry’s original NDAA proposal directed $708.1 billion to the Pentagon, which is less than a new 2019 defense spending budget cap of $716 billion and $22 billion more than Trump’s request.

The request for fiscal year 2019, which begins Oct. 1, sought an increase of more than 15,000 active-duty troops. So far, House committee lawmakers are on board with that plan, along with a 2.6 percent military pay raise, the largest in nine years.

The provisions “will provide the military services flexibility to manage and retain quality force by authorizing responsible end-strength increases, supporting a 2.6 [percent] pay raise, and extending bonuses and special pays,” said Rep. Jackie Speier of California, the ranking Democrat on the House Armed Services Committee subpanel on military personnel issues. It also “increases transparency for the Department of Defense.”

Based on the Trump administration’s Nuclear Posture Review issued earlier this year, the NDAA would also spark the Pentagon’s rebuild of its nuclear infrastructure, despite warnings from Democrats that it’s a costly and dangerous path.

The long-term plan to expand the nuclear arsenal could cost $1.2 trillion.

“With all our needs within the [Defense Department], and we heard earlier about the readiness crisis … we could spend that $1.2 trillion in a way that would make us much safer,” said Rep. Adam Smith of Washington, the ranking Democrat on the House Armed Services Committee. “We should not blindly endorse the Nuclear Posture Review that was put out by the Trump administration. It’s wrong. It takes us down a dangerous path.”

The hearing also saw extended debate on a series of failed amendments, including a proposal to protect military personnel and their relatives from deportation.

“If you are willing to give your life for our country, our country should be willing for you to become a citizen,” said Rep. Donald Norcross, D-N.J., whose daughter-in-law, while in the Army based at Fort Hood in Texas, faced a deportation threat to Mexico as a result of a paperwork mishap.

Among its other provisions, the proposed NDAA will expand its constructive service credit program, which counts advanced education, experience and training toward a servicemember’s rank and grade. It also makes permanent the Career Intermission Program, which allows servicemembers to take a break from active duty.

The plan would also would require the Defense Department to establish a centralized oversight plan to ensure criminal data for servicemembers is reported to the FBI. The effort comes after a Texas church shooting involving a former Air Force servicemember with an unreported criminal record.

The NDAA would also require portions of reports documenting misconduct by senior leadership to be made public.

Lawmakers also expanded efforts to respond to and combat sexual misconduct, such as expediting the transfer process for sexual-assault victims and requiring a new oversight plan for implementation of a new harassment prevention and response policy. For example, it could let a victim transfer between military academies.

“It’s an egregious crime and those who seek to serve on our behalf should not have to suffer harm at the hands of their own,” said Rep. Niki Tsongas, D-Mass. “The fight is far from over.”

The House panel’s Senate counterpart is slated to start its markup process next week. It’s then up to the two chambers to proceed on a deal before sending the NDAA to the president’s desk for his signature.