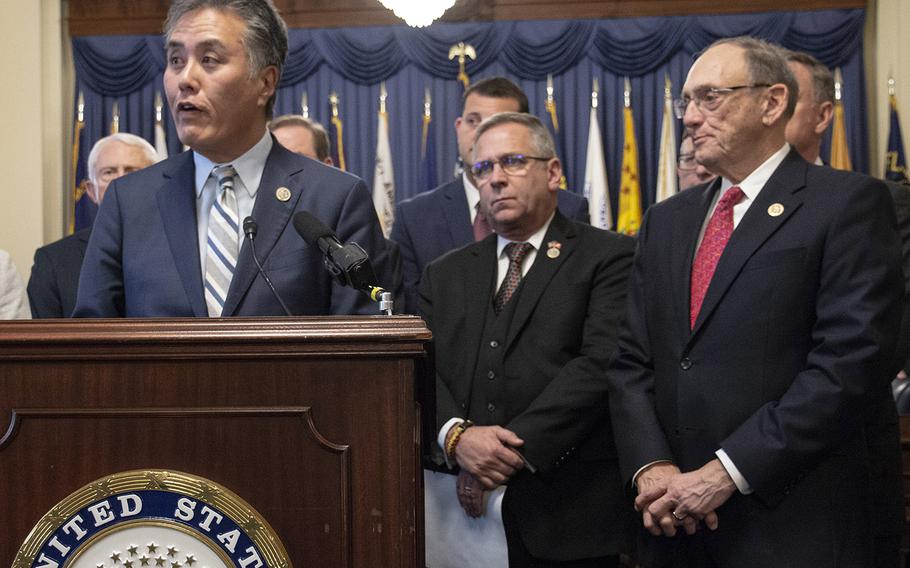 WASHINGTON — Following a federal court decision that veterans who served offshore on ships during the Vietnam War should be eligible for Agent Orange benefits, lawmakers made their case Wednesday for why legislation is still needed to ensure it gets done.

The Court of Appeals for the Federal Circuit ruled 9-2 in January that blue water Navy veterans are eligible for benefits. The decision could pave the way for disability compensation for tens of thousands of veterans who served aboard aircraft carriers, destroyers and other ships but had been deemed ineligible for the same disability benefits as others who served on the ground and inland waterways.

After asking for an extension last month, the Department of Justice now has about a month to appeal the decision to the Supreme Court.

“[The ruling] was a huge step forward, but we need to do more,” Takano said. “We need to ensure blue water veterans are protected in the event [it] is appealed to the Supreme Court and overturned.”

The legislation was the first that Takano introduced this year as the new chairman of the House Committee on Veterans’ Affairs.

The Department of Veterans Affairs was invited to Wednesday’s hearing to discuss its plans to extend benefits, given the federal court ruling. The VA sent a representative to discuss other bills being considered, but not the blue water bill.

“Because the administration is still considering its legal options, the VA does not have any views to offer on this legislation,” said Matthew Sullivan, with the VA’s National Cemetery Administration. “We must respectfully decline to answer any questions you have today about the bill.”

In its request for an extension to file an appeal, the Department of Justice wrote it needed more time to research the legal and practical impact of the ruling. VA Secretary Robert Wilkie has recommended the DOJ not appeal it.

Rep. Elaine Luria, D-Va., the chairwoman of the VA committee’s subpanel on disability assistance and memorial affairs, said the panel would soon hold another hearing, during which she would ask the VA to share its plans for extending benefits to the affected veterans.

“We expect to have the VA appear at that time,” she said.

Rep. Phil Roe, R-Tenn., argued the bill was still necessary because it remains unclear how the VA will interpret the federal court ruling.

Two groups recently pulled its support for the bill. The Blue Water Navy Vietnam Veterans Association and Military-Veterans Advocacy believe language in the bill would inadvertently limit the number of veterans who would be eligible for benefits if the court ruling were to stand.

John Wells, director of Military-Veterans Advocacy and one of the attorneys involved in the court case, has asked lawmakers to use broader language.

“It gives me no pleasure to withdraw support for this bill,” Wells said in a letter to Takano. “I’ve walked the halls of Congress for most of a decade trying to get benefits for these sailors. When Congress failed us, we turned to the courts and won. I implore you to refrain from marginalizing that victory with the limiting language of the present bill.”

Wells said he approved of a Senate bill that also aims to extend benefits to blue water veterans, which he described as less restrictive.