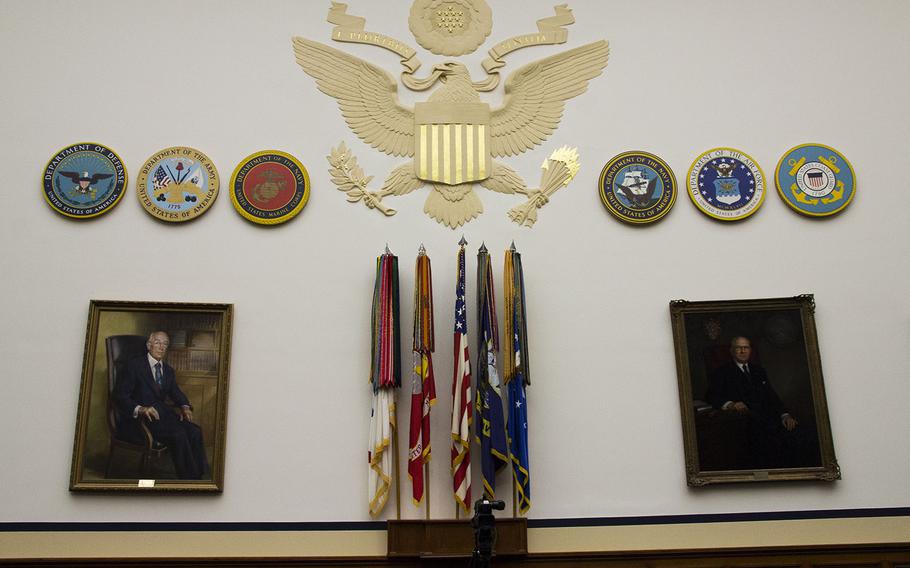 The House Armed Services Committee cleared a $696.5 billion fiscal 2018 defense authorization bill early Thursday, but supporters warn it will be sliced back if the 2010 Budget Control Act (BCA) isn’t repealed or if Congress lets bitter partisanship continue to produce late and unstable budgets for the military.

Even with Republicans controlling the White House and both chambers of Congress, lawmakers remain so divided on budget priorities that this year they can’t agree even on a budget blueprint to set topline targets for the armed services committees and other panels responsible for federal departments and programs.

Absent such guidance from deadlocked budget committees, the House Armed Services Committee and its chairman, Rep. Mac Thornberry, R-Texas, marked up a defense policy bill that, he said, “takes significant steps toward repairing and rebuilding our military” and continuing reforms to better support warfighters.

The committee’s base defense budget is $631.5 billion with an additional $65 billion to fund current wars in an Overseas Contingency Operations account. President Donald Trump sought a base budget of $603 billion, which Thornberry said was 5 percent above the 2017 defense budget but only 3 percent higher than President Barack Obama planned for fiscal 2018. He said the Trump ’18 budget “would cut missile defense below current spending, cut shipbuilding accounts [and] add no additional soldiers.”

Though the House bill supports $696 billion overall for defense, “it is highly unlikely that at the end of this process we’re going to have $696 billion,” Rep. Adam Smith, of Washington, ranking Democrat, advised committee colleagues.

The actual defense budget cap imposed by the BCA for 2018 is only $549 billion, far below the House Committee’s base budget of $631.5 billion. And the Senate needs the support of 60 of 100 senators to lift that BCA cap, Smith said.

“Right now, we’re doing this $696 billion and we’re hoping between now and October 1st some path that at the moment is completely blocked and completely unforeseen is going to emerge [and] enable us to do this,” Smith said. “We need to get past that [and] honestly look at the money we have. And if we are committed to funding all of these shortfalls we’re [talking] about today then … provide the money.” But with the BCA still in place and “absent a budget resolution, what we’re doing here today ultimately does not have the force of law,” Smith warned.

“As the chairman has noted,” Smith added, “there are a lot of things that we feel are not funded” in the committee’s mark. “Imagine where [readiness is] at if we have to stumble all the way back to $549 billion, which is what’s going to happen if we don’t vote to raise the budget caps.”

If the House budget bill does get squeezed harder, either by tardy budget committee guidance, lack of new BCA relief or in negotiations with the Senate, the pace for restoring force readiness will be slowed but the issues at stake for military compensation and quality of life are thinner than in years past.

The committee proposes that servicemembers get a modestly larger pay raise of 2.4 percent next January, enough to match recent wage growth in the private sector, instead of a 2.1 percent pay raise cap sought by the Trump team to save roughly $200 million next year, and more in subsequent years.

The committee would increase the active Army by 10,000 soldiers, the Army National Guard by 4,000 and Army Reserve by 3,000 soldiers, strength gains not sought in Trump’s first defense budget request because a new national strategy is being worked on by new Defense Secretary Jim Mattis and the Joint Chiefs.

With House lawmakers standing for re-election every two years, its armed services committee often lets Senate counterparts take the lead on decisions for curbing compensation costs in the annual defense policy bill. This year, the House committee refused to embrace the Defense Department’s call to raise Tricare fees for working-age retirees, and to increase drug co-pays for prescriptions filled at retail outlets or through Tricare mail order.

But the committee also couldn’t identify budget offsets to pay for extending Special Survivor Indemnity Allowance (SSIA) beyond its current expiration of May 31, 2018. SSIA provides $310 a month to 63,000 surviving spouses of servicemembers who died on active duty or later from severe service-connected injuries or ailments. Congress created it as partial compensation for an unpopular dollar-for-dollar offset survivors see to their Survivor Benefit Plan (SBP) payments when they also begin to receive Dependency and Indemnity Compensation (DIC) from the VA.

The committee longer term wants to end the SBP-DIC offset entirely but it sees that goal as unaffordable in the current budget climate. Rep. Susan Davis, D-Calif., had drafted an amendment that would double SSIA over next three years, to reach $620 a month, thus further reducing the sting of the SBP-DIC offset.

To pay for it, she proposed raising co-pays for generic drugs under Tricare insurance by $4 over the next nine years, from $10 per prescription to $14.

“I don’t think this is breaking faith,” Davis said. “A military unit of any size takes care of its servicemembers, as well as families, as a team, and that’s the way we need to be looking at these benefits.” Retirees she spoke with, Davis said, “don’t object to helping the widows of other servicemembers and retirees with a small increase in pharmacy co-pays.”

But Davis said the Senate also “was making provisions for SSIA” expansion in their bill. She therefore withdrew her amendment when Thornberry promised he will not allow the SSIA program to expire next May.

“We have to find mandatory savings to continue that program and we will,” Thornberry told her. He added, “We’re going to have a lot of opportunity over the course of the conference” with senators “to nail down those details, as well as deal with whatever instructions we may get if the House passes a budget resolution.”

On a related matter, Davis said Congress erred last year in voting to grandfather all current military retirees and currently serving future retirees from hikes in Tricare fees and pharmacy co-pays that it voted to impose on future force members who serve long enough to retire. So Davis drafted another amendment to remove that protection. Otherwise, it “will force the Department of Defense to maintain a two-fee structure system for the next 50 years.”

Her amendment, she added, not only would put all retirees on the same higher fee schedule, but it would shift the formula for adjusting Tricare fees to a national health expenditure index rather than the same general inflation index used to adjust military retirement and other entitlements.

Davis said the Defense Department supported these changes, quoting its argument that retirees paid 25 percent of their own health insurance costs in 1994, when Tricare began, but today pay only 8 percent. The changes she endorses would bump their out-of-pocket costs only back to 10 percent, she said.

But then Davis withdrew this amendment too, saying it’s a sensitive issue and “we really want to bring all the stakeholders on board. We’re not there yet.”

Experience shows this is the type of issue the House committee likes to see the Senate take point on, so this and the pay cap might not be dead for this year. The Senate Armed Services Committee began to mark up its defense authorization bill behind closed doors Monday. Those details are expected to be released soon.