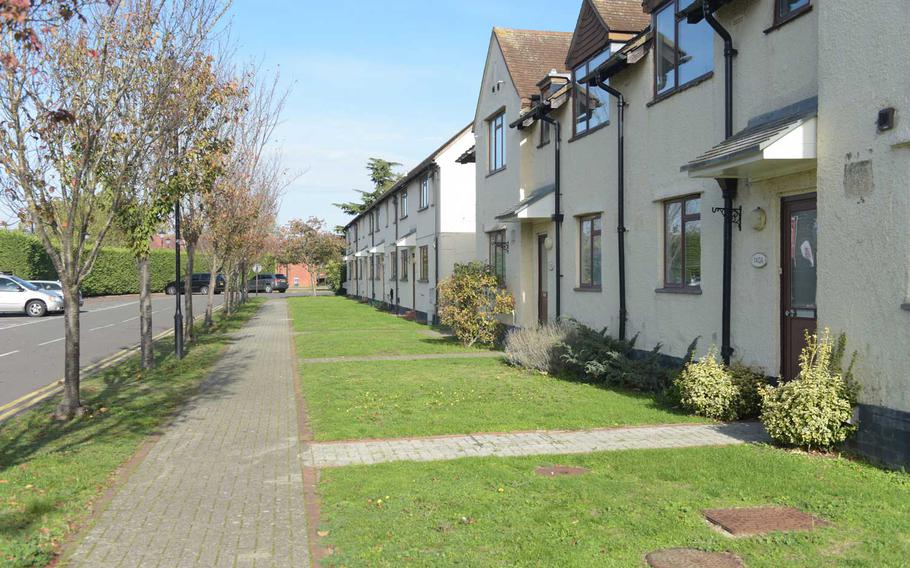 U.S. Air Force on base housing at RAF Mildenhall, England, Oct. 24, 2018. On Tuesday, the readiness subpanel of the House Armed Services Committee will discuss their proposed draft for the House version of the fiscal year 2021 National Defense Authorization Act. It includes a requirement that there be a report to Congress focused on known environmental hazards in government-owned family housing, including overseas housing. (Alexandria Lee/U.S. Air Force)

WASHINGTON— Lawmakers on a House readiness subcommittee want the 2021 defense bill to require the same oversight of hazards in government-owned military housing that is now necessary for base housing run by private companies, committee aides said Monday.

Last year, Congress focused on improving the conditions in military base housing operated by private companies after families described during congressional hearings and in news reports how they had lived in housing that had mold and pest infestations.

On Tuesday, the readiness subpanel of the House Armed Services Committee will discuss their proposed draft for the House version of the fiscal year 2021 National Defense Authorization Act. It includes a requirement that there be a report to Congress focused on known environmental hazards in government-owned family housing, including overseas housing, “so that we can get a better look across the department on trends and issues in housing enterprise,” a committee aide said Monday during a call with reporters.

The draft states government-owned military family housing makes up a small percentage of homes, but it needs to be scrutinized the same as housing on military bases run by private companies.

The report would include a list of government homes that have lead, radon or asbestos, the mitigation plans for making certain homes are safe, and the processes and options for families to refuse to live in an overseas home that contains hazards, according to the readiness subcommittee’s draft document.

The markup also requires the Pentagon to report on how they would create standard of measuring results across the services to evaluate the quality of the housing so the Defense Department can track trends.

In response to several deadly vehicle and aircraft accidents during military training, the readiness subcommittee’s draft requires the Pentagon to report to Congress on how they will improve the collection and reporting of mishap data.

The Government Accountability Office, a federal watchdog agency, found the collection of data by the military services is not standardized, making it difficult for the military to analyze data and track trends related to mishaps, according to the draft document.

The required report is so Congress “can better assess how the department's tracking and learning lessons from individual events to ensure that they don't happen again in the future,” a committee aide said.

The readiness subcommittee’s draft also touched on the military’s continued problem finding an alternative to the firefighting foam that contains per- and polyfluoroalkyl substances, otherwise known as PFAS, which is a synthetic chemical that can contaminate drinking or ground water. The subcommittee authorized the defense secretary to have a competitive program to award up to $5 million for research and development of a non-PFAS firefighting chemical.

The draft also requires that any spill or use of PFAS firefighting foam at any military installation be reported to Congress within 48 hours of when the deputy assistant secretary of defense for environment is notified.