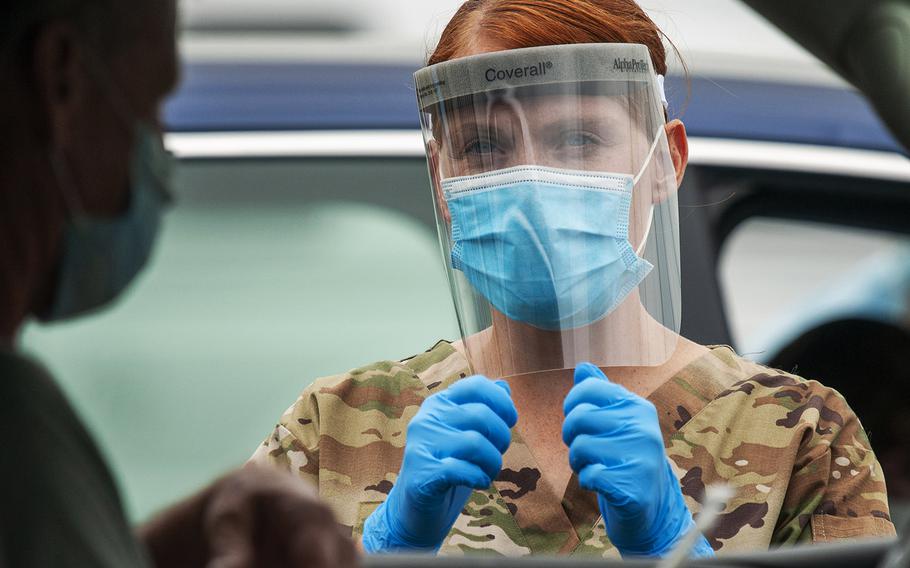 Pfc. Kelly Buterbaugh, a combat medic with the Delaware Army National Guard, gives instructions to a motorist during a drive-thru coronavirus testing mission at the University of Delaware's Science, Technology and Advanced Research Campus in Newark, Delaware, May 29, 2020. (Brendan Mackie/Army National Guard)

WASHINGTON — Three House Democrats on Monday introduced a bill that would fully fund the National Guard’s coronavirus mission as more than 20,000 troops are still deployed across the country assisting the fight against the pandemic.

The measure -- introduced by Reps. Cheri Bustos of Illinois, Deb Haaland of New Mexico and Max Rose of New York – follows President Donald Trump’s order three week ago to extend federal status through the end of the year for troops on coronavirus missions, but shifted 25% of the financial burden to most states, a move that has been criticized by some lawmakers who said it hindered the military’s efforts to combat the pandemic.

“This administration needs to learn that it is responsible for every state and territory in our nation, not just those from which it hopes to curry favor,” Bustos said in a statement. “In the middle of a pandemic, this administration decided to play political games and give preferential treatment to some states over others. Without providing any public health or economic justifications, it has burdened some cash-strapped states with a bill while exempting others – even though the [coronavirus] pandemic has wreaked havoc on every budget."

In March, the National Guard was called up to help mitigate the spread and the secondary effects of the virus through state missions such as operating testing sites, assisting food banks, and manning call centers for health concerns and unemployment offices. As the pandemic escalated, Trump authorized the use of federal funds for the troops, but through state-by-state memos instead of a blanket approval.

Initially, Trump directed the federal government to continue covering all Guard costs in Texas and Florida through the rest of the year. However, he has since ordered Connecticut, Arizona and California to get 100% funding through Sept. 30. All other states and territories have to pay 25% of the cost, possibly leading to states having to cut back on recovery efforts.

“The administration shouldn’t be nickel-and-diming New York state, and definitely shouldn’t be selecting which states to help based on whether they voted for the president,” said Rose, who also serves as an infantry officer in the National Guard and deployed to assist in pandemic response efforts. “Forcing New York to pay this burden will cause more layoffs of cops, firefighters, first responders, and teachers, while other states get off free.”

The directives do not explain why two states were selected to have full funding from the federal government and why three states have a fast-approaching time limit. As of Monday, there are 20,600 Air and Army National Guard members deployed to support civilian agencies with coronavirus missions, according to the National Guard Bureau.

At the height of the coronavirus mission in May, nearly 50,000 Guard members were activated, mostly under Title 32 status, which allows the cost of the troops to be covered by the federal government but keeps governors in control of them. Title 32 status also entitles service members to receive federal benefits and pay bonuses.

Democrats led by Bustos, Rose, and Haaland asserted in a letter earlier this month that the administration's seemingly random and strict deadlines for funding the Guard's mission makes it difficult to manage recovery efforts. They implore soldiers and airmen have been critical to combating the pandemic, but the White House’s unpredictable manner of its handling of the crisis has forced some states to send troops home.

“Most recently, some states — waiting for yet another extension — had to demobilize hundreds of troops who had been working on testing [and] contact tracing,” lawmakers wrote in a letter to Defense Secretary Mark Esper and Homeland Security Secretary Chad Wolf. “The continued failure to adopt conditions-based activations and the certainty they would provide undermines states’ public-health strategies. While we appreciate the new extension to Dec. 31, that deadline is just as arbitrary.”

The National Governors Association demanded in a letter to Trump that the administration provide 100% of the cost of the Guard deployments for the rest of the year.

“States and territories are concerned about the new 25% financial burden during a recession that they are required to shoulder while also executing unprecedented responsibility to protect the public health and well-being of constituents,” the group wrote.

The Guard’s coronavirus mission is the most ambitious domestic use of troops for a noncombat mission, with most units throughout the country operating in some capacity since early March. Governors have also been saying in addition to combating the virus, federal status could better equip states to prepare for hurricane season, which sometimes requires deploying troops for relief.

“With natural disaster season on the horizon, we believe the consistency of Title 32 specifically for coronavirus-related missions will help to provide states and territories with flexibility for easier transitions to supporting local disaster-related crises,” according to the association’s letter to Trump.

In early June, the Guard’s deployments for coronavirus missions and racial justice protests increased the number of troops on the ground to a peak of 75,000 soldiers and airmen. It marked the largest domestic use of the Guard outside of a war scenario. In addition to coronavirus and protests missions, there are an additional 2,400 Guard troops along the U.S.-Mexico border and more than 28,000 deployed overseas, according to the National Guard Bureau.