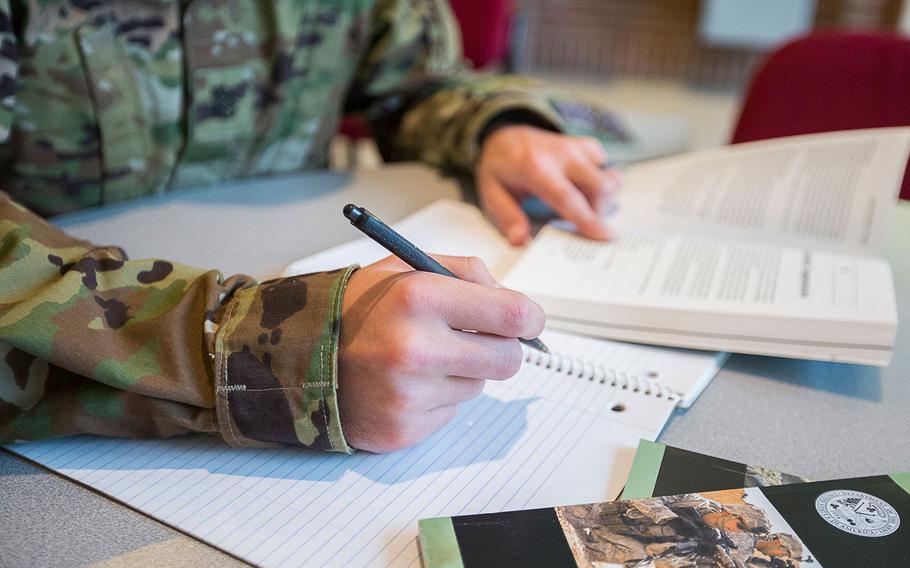 House lawmakers voted 405-0 unanimously passing a host of changes to veterans’ education benefits that aim to boost aid, expand who’s eligible for benefits and eliminate the expiration date for veterans to use them. (Joint Base Myer-Henderson Hall)

WASHINGTON — House lawmakers on Monday unanimously passed a host of changes to veterans’ education benefits that boost aid, expand who’s eligible for benefits and eliminate the expiration date for veterans to use them.

“In the time I’ve had the privilege of representing southwestern Minnesota, I’m not sure there’s been a day I’ve felt more of that pride than here today,” Walz said. “This is a real historic piece of work. It is hard to get historic legislation like this done.”

The legislation eliminates the 15-year limit afforded veterans to use their education benefits after leaving military service. The change would apply only to servicemembers who enlist after the expanded GI Bill takes effect, which is expected to be Jan. 1, 2018.

It also restores benefits to veterans whose schools abruptly close. In the past two years, when for-profit ITT Technical Institute and Corinthian Colleges closed their doors, thousands of veterans who attended the campuses were unable to recover lost education benefits. The bill would fully restore any lost benefits to veterans affected by those kinds of closures. Going forward, veterans can receive back their GI Bill benefits for the semester their schools abruptly close, as well as up to four months of additional living stipends.

The legislation also boosts aid for dependents, Purple Heart recipients, technical education and members of the National Guard and Reserve. It fixes a Pentagon deployment authorization that has kept about 5,000 reservists and guardsmen from accumulating education benefits.

Altogether, it combines 18 bills and is expected to increase GI Bill costs by $3 billion in 10 years. To offset costs, the legislation calls for decreasing living stipends to GI Bill recipients to fall in line with active-duty servicemembers' basic housing allowance. The change would not apply to people now using the GI Bill.

The GI Bill expansion was introduced July 13 and was the subject of a committee hearing July 17. The House Veterans’ Affairs Committee unanimously decided July 19 to send it to the House floor for a vote.

The legislation was put together by lawmakers during the last several weeks. Negotiations were reignited by a group of veterans organizations, led by Student Veterans of America, following a rift between organizations in April about how to pay for the GI Bill expansion. Walz said it was almost a “death knell” for the bill.

With a new proposal on how to pay for the expanded benefits, veterans organizations encouraged lawmakers to pass the bill before leaving for their August recess.

“Without a doubt, we would not be in the chamber today on the verge of this historic moment without their efforts,” Roe said of the organizations. “This is a strong bill that would help thousands of student veterans for the rest of their lives.”

The legislation also appears poised for quick passage in the Senate.

The Senate Veterans’ Affairs Committee will vote on the legislation Wednesday and won’t consider any amendments, committee staff said. If the committee approves the bill, it would then have to be scheduled for a vote on the Senate floor.

Besides the expanded GI Bill, the House passed seven other VA-related bills Monday.

H.R. 1690, introduced by Rep. Claudia Tenney, R-N.Y., requires the VA to submit an annual report to Congress disclosing high-dollar bonuses to senior executives. Lawmakers balked when the VA was found to have spent $3.3 million on bonuses to 300 senior executives in 2015 while the department was facing a perceived culture of corruption and misconduct.

H.R. 282, introduced by Rep. Elise Stefanik, R-N.Y., allows servicemembers and their spouses to use the same state of residence for the purpose of taxation and voting, even if a servicemember is relocated and the spouse isn’t living in the same state. The bill’s advocates said it would ease the burden placed on military families when relocating.

H.R. 1058 would boost pay in the VA system for podiatrists to put the doctors on equal footing with physicians. Rep. Brad Wenstrup, R-Ohio, introduced the bill. He’s a licensed podiatrist. According to the House Committee on Veterans’ Affairs, the bill is expected to help recruit and retain podiatrists, which is a struggle for the VA.

Under the Veterans First Program, the VA prioritizes veteran-owned small businesses for contracts. H.R. 2749 would require participants of the program to report whether veteran-owned businesses are performing the mandated amount of work that’s required to receive the preference. If they’re not, the bill instructs the VA to report violators to the Office of Inspector General. There’s concern some businesses are obtaining contracts through the program and collecting profit while passing all the work to other companies. The bill was introduced by Rep. Jack Bergman, R-Mich., and Rep. Anne Kuster, D-N.H., who lead the House subcommittee on VA oversight and investigations.

H.R. 2006, introduced by Rep. Mike Coffman, R-Colo., requires the VA to calculate how much it saves on federal contracts by encouraging competition.

Lastly, H.R. 1848, introduced by Roe, establishes a two-year pilot program for the VA to use medical scribes to assist doctors by entering patient data into electronic health records. Roe said the program could help veterans get appointments with doctors faster.

All of the legislation must be approved by the Senate to become law.