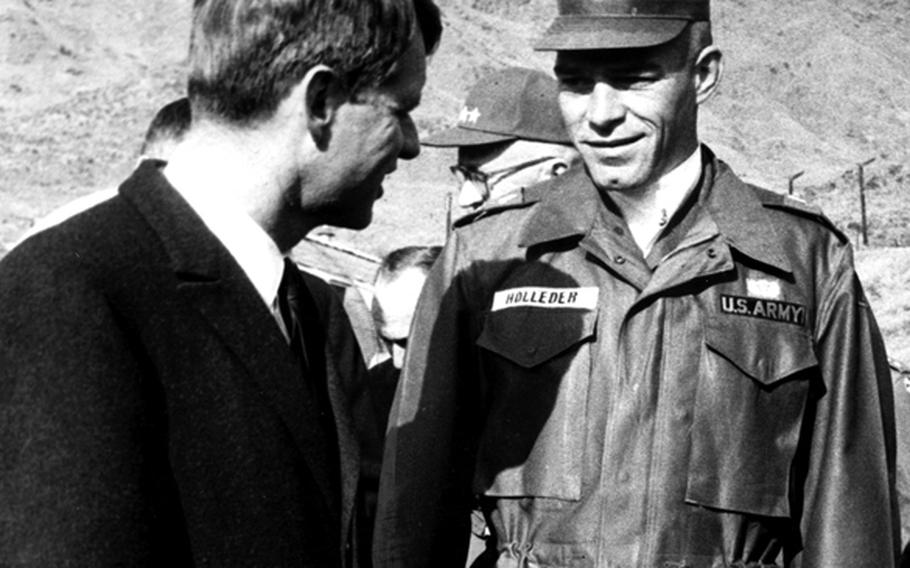 Buy Photo
Attorney General Robert F. Kennedy talks with Capt. Don Holleder, a former West Point football star, during a visit to South Korea in January, 1964. Holleder was killed by a sniper in 1967. On Friday, he was posthumously awarded the Distinguished Service Cross, the second-highest combat award. (Stars and Stripes)

Pat Tillman and Don Holleder played football well enough to draw the interest of NFL teams. Like Tillman, Holleder - a generation earlier - opted for military service, though Tillman did play in Arizona for a few years. Both died in the line of duty in a far away land.Though it has been more than four decades since Holleder's death, the Army hasn't forgotten his service or sacrifice either. On Friday, the Army posthumously awarded Holleder the Distinguished Service Cross, the second-highest combat award for a servicemember, the Rochester Democrat and Chronicle reports.At the time of his death, Holleder was a major serving in Vietnam. On Oct. 17, 1967, he was fatally shot by a sniper while leading an effort to assist 142 soldiers being fired on by an overwhelming enemy force. The paper, quoting from the citation, said that under "intense sniper fire" Holleder led an effort to evacuate the wounded, "had a stabilizing effect on his men and was instrutmental in saving many lives."Holleder was promiently mentioned in a Stars and Stripes article in January 1964 while serving as a company commander in Korea. Robert F. Kennedy, then the U.S. Attorney General, was in south Korea visiting with U.S. forces when their paths crossed.Kennedy, who refered to Holleder as one of his heroes, posed with the company commander for pictures. Like Tillman, Holleder's decision to choose the military over football had drawn great interest. An All-American football player at West Point in 1954, Holleder rejected an offer from the New York Giants to pursue a military career.In the Rochester Democrat and Chronicle article, a former West Point teammate of Holleder's described the former quarterback as a leader."Don was one of the most aggressive football players I've ever laid my eyes on," the paper quoted Bill Cody as saying at Friday's ceremony at Arlington National Cemetery. Holleder was "one of those guys who couldn't think of anything but winning." Cody added that Holleder "was truly ambitious in the sense of doing the right thing - not ambitious in terms of taking credit."Friday's ceremony was attended by former West Point classmates, such as Cody, Army veterans and three of his four daughters.Source: Rochester Democrat and Chronicle