Highlights of the House’s version of the 2015 Defense bill 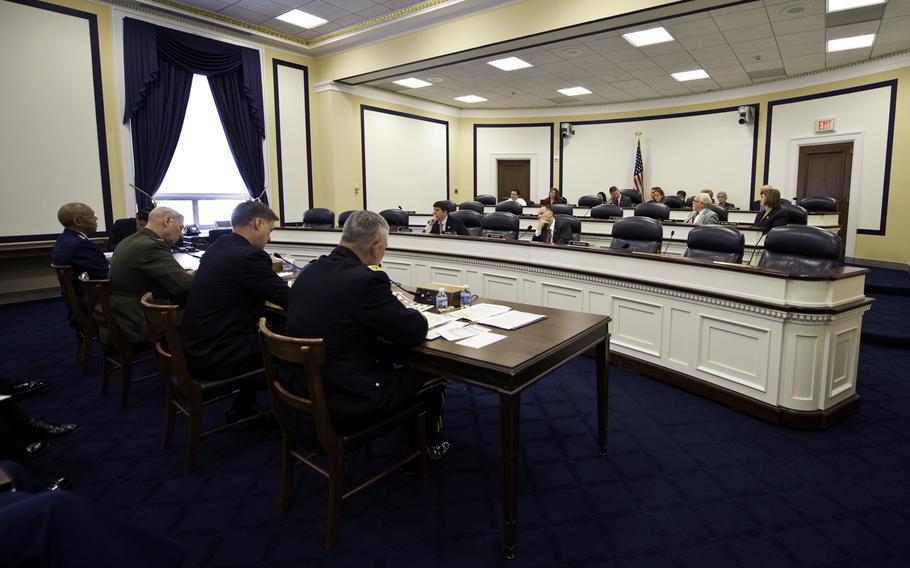 The House Armed Services Committee debated into the night Wednesday, adding or striking a variety of new proposals for the 2015 defense budget. Here’s a rundown:

An effort by Democrats to take sexual assault prosecutions out of the military chain of command was defeated in a 28-34 vote by the committee, despite strong and emotional support from some members. The military has strongly opposed such proposals and House opponents said commanders should retain control and be held accountable for their decisions. Lawmakers approved a measure to protect tobacco sales in base exchanges. Bill sponsor Rep. Duncan Hunter, R-Calif., who served in the Marine Corps, said young servicemembers should have the right to smoke or chew, and lawmakers who support base tobacco bans should “just outlaw war” because it also damages servicemember health. A proposal requiring that Department of Defense Inspector General report on a recent rash of misconduct among the military’s top brass be made public was dropped by its sponsor, Rep. Jackie Speier, D-Calif., who had said Americans “shouldn’t depend on media leaks for accountability.” The Army National Guard could keep its AH-64 Apache attack helicopters under the House budget. Congressmen Joe Wilson, R-S.C., and Bill Enyart, D-Ill., added an item that bars the DOD from transferring all the helicopters over to the Army, saying the planned move “dramatically reduces the National Guard’s ability to maintain combat capability.” Rep. Hank Johnson, D-Ga., added $10 million to the defense budget for science research at historically black colleges, though he said the funding is still short of what is needed. “Some of the most important and advanced scientific research in the nation is taking place” at such institutions, he said. Johnson was also successful in adding a proposal that blocks the DOD from enforcing new hair and grooming standards for female soldiers. For now, the amendment is redundant. After an outcry from soldiers and the Congressional Black Caucus, which claimed the hair regulations were racism, Defense Secretary Hagel said last month the rules would not be enforced pending a review. The House added a measure blocking new Department of Labor minimum-wage standards for contract workers at base concession stands. The change has significantly boosted pay for low-wage workers but amendment sponsor Rep. Scott Rigell, R-Va., whose district covers Virginia Beach Navy facilities, said the higher employee pay requirements were causing base concessionaires to close shop. Opponents of the amendment said it was attempting to “undermine an effort to help the lowest wage earners” in the country. New regulations on the production and use of alternative biofuels by the military were passed. Two amendments lifted a requirement that the DOD procure biofuels that are proven to be cheaper than standard oil-derived fuels and barred the DOD from building any biofuel refinery unless Congress passes a new law specifically allowing the move. Rep. Tammy Duckworth, D-Ill., floated a proposal to stop giving money to the Navy for littoral combat ships until the service presents its long-term strategy for the crafts. But opponents who shot down the measure said the more LCSs are badly needed and that Congress has already “done oversight almost ad nauseam.”tritten.travis@stripes.com Twitter: @Travis_Tritten