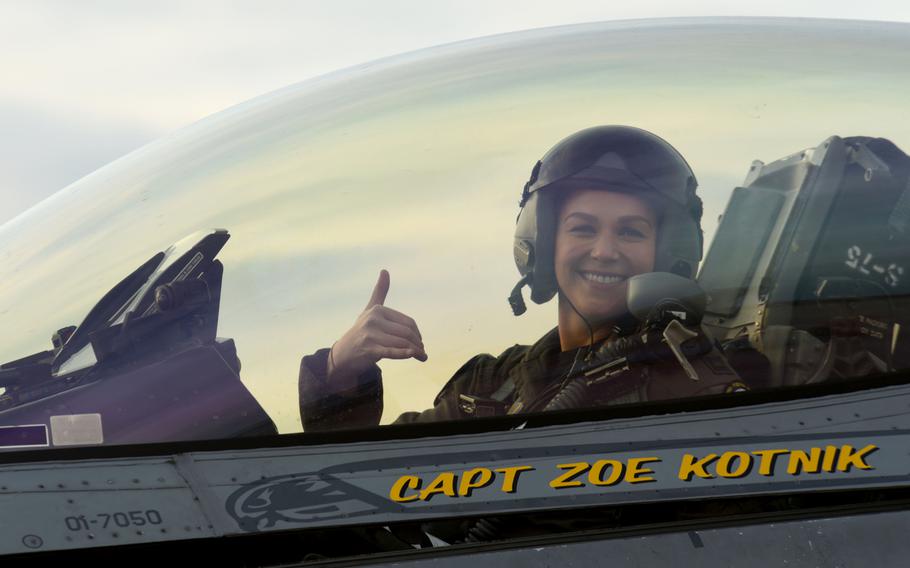 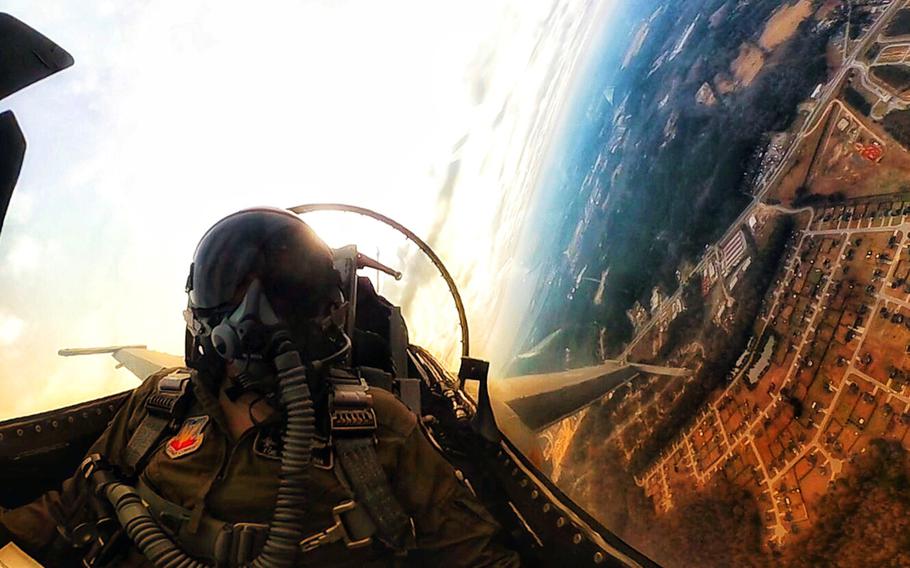 The Air Force has named its first female commander of a single-aircraft demonstration team, as the service looks to leverage the anticipated popularity of an upcoming superhero movie featuring a female fighter pilot to spur recruitment.

Capt. Zoe “SiS” Kotnik was named pilot and commander of the Air Combat Command’s F-16 Viper Demonstration Team last week after completing a series of certification flights. The team showcases the F-16V Viper, the latest variant of the Fighting Falcon, at dozens of airshows each year.

In announcing Kotnik’s selection on Twitter, the team posted a video and photos framed and lettered like a comic panel.

“In that instant ... She knew she could fly her F-16 higher, further and faster than anyone else,” reads text that appears in the images.

The line is a clear nod to the “Captain Marvel” film, which premieres on March 8 and features Brie Larson in the role of the titular superhero, whose alter ego Carol Danvers is an F-16 pilot in the Air Force. Air Force pilots, including Brig. Gen. Jeannie Leavitt, the service’s first female fighter pilot, assisted in the production.

“About to show these boys how we do it,” Lynch says. “You ready?”

In another nod to the movie, the Air Force Recruiting Service included the hashtag #higherfurtherfaster in a post on Friday announcing that Leavitt, who heads the recruiting service, hosted dozens of female pilots for an event at Edwards Air Force Base, Calif. Kotnik was among them.

“Every hero has an origin story,” said the post, which included a photo the women on a foggy tarmac in front of a formation of aircraft. “We asked over 80 female pilots to share theirs.”

Kotnik’s origin story started in Poynette, Wis., where she was born into a family of aviators. Her uncle was skydiver and airshow hall of fame pilot Charlie Hillard, who in 1972 became the first American to win the World Aerobatic Championships. Her mother was also a private pilot.

But Kotnik’s path to becoming a fighter pilot really began when she saw a NASA T-38 Talon supersonic jet trainer pull up at an airshow, she told Live Airshow TV last fall in a video interview. The pilot shut down the engines, popped the canopy and pulled off the flight helmet, revealing a female fighter pilot.

“It was at that moment that I realized, ‘Oh my god, that’s exactly what I can do,’” Kotnik said.

Most recently, at Shaw, she flew missions supporting Operation Noble Eagle — the air defense mission to prevent another 9/11 — and served as an instructor pilot training new F-16 wingmen.

She’s clocked more than 1,000 flying hours, but before cinching her spot as pilot and commander of the demonstration team for the next two years, she completed off-station training and more than 30 practice missions, then had to prove her skills in four certification flights.

Now Kotnik will lead a team of 17 airmen assigned to Shaw’s 20th Operations Group as they travel to more than 20 airshows showcasing the F-16’s maneuverability to an estimated 10 million spectators each year, the Air Force said.

The Viper team, one of four single aircraft performance teams in the Air Combat Command, is a key part of the service’s recruiting efforts. The command also oversees an A-10 Thunderbolt II team and an F-22 Raptor team. Newly added for the 2019 season is an F-35 Lightning II demonstration team. The F-35 previously only flew in the command’s heritage formation alongside fighters from previous eras.

Kotnik’s team is in preseason training and is slated to perform their first show in Key West, Fla., from March 30-31.

Kotnik said she’s looking forward to having the effect on younger generations the NASA T-38 pilot had on her.

“I know firsthand how impactful airshows can be and what a difference it makes to young people to see just one example of what they too can do,” she said. “I hope to be a source of inspiration and motivation they can draw from.”