Health and Human Services asks Pentagon to find locations to house up to 5,000 migrant children 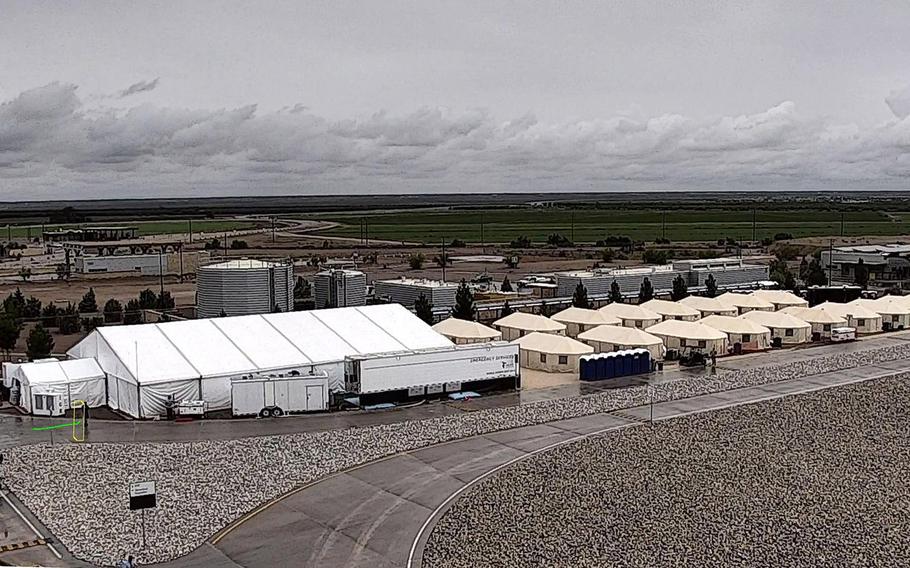 The shelter used to house unaccompanied migrant children in Tornillo, Texas, is seen in an undated photo. (Provided by Department of Health and Human Services, Administration for Children and Families)

AUSTIN, Texas — The Defense Department was asked this week to provide more support in the mission to control immigration along the U.S.-Mexico border by finding space to house up to 5,000 migrant children, Army Lt. Col. Jamie Davis, a Pentagon spokesman, said Thursday.

The request comes as Customs and Border Protection announced Tuesday that apprehensions of unaccompanied minors along the southern border are up 54 percent compared to one year ago.

Eric Hargan, deputy secretary of the Department Health and Human Services, on Tuesday requested the Defense Department’s support to identify space on military installations to house the children through Sept. 30, Davis said.

More than 11,500 children are in federal custody as unaccompanied minors, according to the website for HHS’s Office of Refugee Resettlement. The program is required to provide care, food, shelter and services to the children before they are released to a suitable sponsor, usually a parent or close relative, said Evelyn Stauffer, spokeswoman for the Administration of Children and Families, the office within HHS that manages the refugee resettlement program.

“While the number of (children) in HHS shelters decreased recently due to intensive case management efforts by [the refugee resettlement program], it remains high by historical standards, and existing shelter capacity is nearly full,” she said in an emailed statement.

As in the past, the majority of children in custody traveled across the border without a parent, Stauffer said.

The need for help with housing comes from a continuing increase in border crossings. The refugee program received 4,490 referrals in January and 6,546 in February. Last month’s numbers were up 120 percent from February 2018. Based on seasonal patterns, Stauffer said they predict the increase to continue during the next few months.

For that reason, HHS is “preparing for the need for high-bed capacity to continue” and “is once again requesting the assistance of the Department of Defense to help respond to the migration influx of unaccompanied alien children along our southern border,” she said.

“DoD will work with the military services to identify potential locations for such support, and will work with HHS to assess any DoD facilities or suitable DoD land for potential use to provide temporary shelter for unaccompanied alien children,” Davis said.

From there, the Pentagon will present the space available for the children to HHS. Should that agency “determine use of DoD facilities or land is necessary, HHS will submit an additional request to DoD to execute such support,” he said.

The military has become increasingly involved along the U.S. border with Mexico. Pentagon officials have estimated the Defense Department will spend more than $700 million on providing National Guard and active-duty servicemembers to support Border Patrol operations. About 6,000 troops are deployed now on that mission.

The Pentagon also was asked in June 2018 to provide 21 lawyers to federal courthouses in the southwest to help with the backlog of immigration cases.

This is not the first time that the Defense Department has been asked to house migrants. A similar request came last summer as President Donald Trump’s administration faced scrutiny for separating parents from their children as they crossed the border. HHS, as well as the Department of Homeland Security, were seeking space to house adults and minors. Neither agency acted on those requests.

Last year’s review of military bases capable of housing children included potential impact studies with some of the results being made public. At Goodfellow, a study released July 6 showed that making room for 15,000 adults and children migrants would have no impact to operations. To do so, the study outlined a plan to build temporary structures on the base.

The studies conducted based on the 2018 request will be part of the new review process, Davis said.

The military has housed unaccompanied migrant minors in the past. In 2014, HHS used space at Lackland Air Force Base in Texas to house thousands of unaccompanied children.