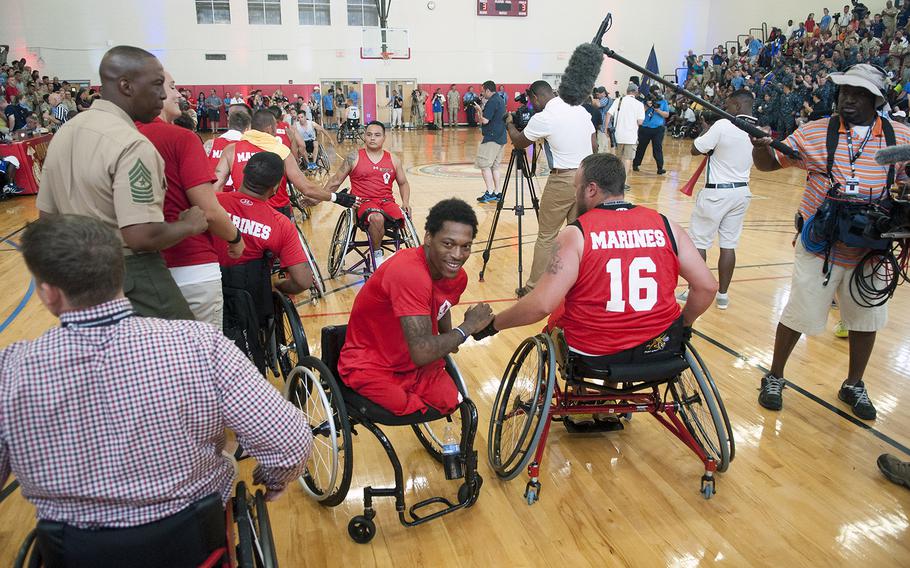 Anthony McDaniel congratulates his former wheelchair basketball teammates Tuesday, June 23, 2015, after Team Marine Corps beat Navy during the Warrior Games championship matchup at Quantico Marine Base, Va. McDaniel, a star player for the team in previous years, was ineligible to play on the team this year after trying out for the U.S. Paralympic basketball team, which placed him in a high-performance pool of players. (Carlos Bongioanni/Stars and Stripes)

Anthony McDaniel congratulates his former wheelchair basketball teammates Tuesday, June 23, 2015, after Team Marine Corps beat Navy during the Warrior Games championship matchup at Quantico Marine Base, Va. McDaniel, a star player for the team in previous years, was ineligible to play on the team this year after trying out for the U.S. Paralympic basketball team, which placed him in a high-performance pool of players. (Carlos Bongioanni/Stars and Stripes) Anthony McDaniel competes in a discus event Tuesday June 23, 2015, during the Warrior Games held at Quantico Marine Base, Virginia. Watching from the sidelines is Marine Capt. James Ferguson, who was present in Afghanistan in 2010 when McDaniel suffered major injuries from an IED blast losing both legs and his lower left arm. McDaniel won seven gold medals at the Warrior Games last year. (Carlos Bongioanni/Stars and Stripes) 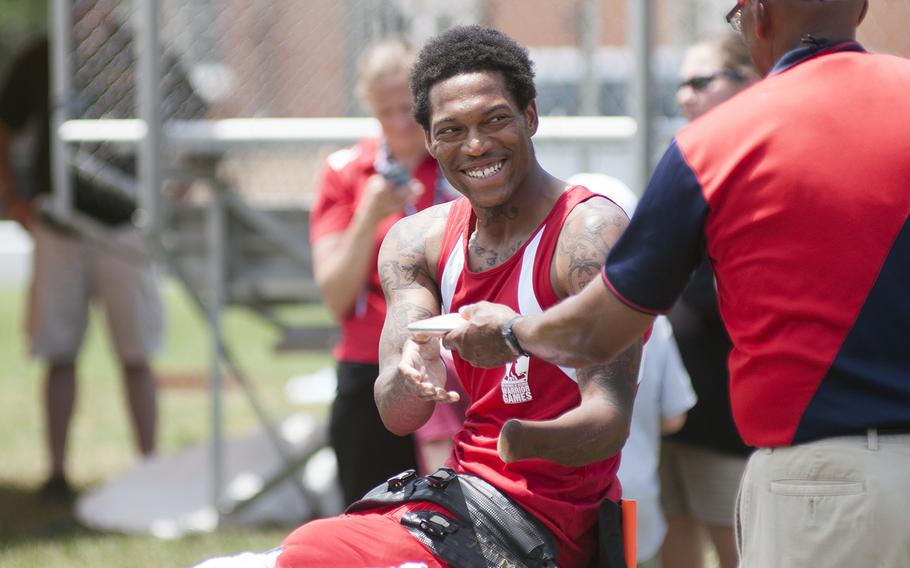 Anthony McDaniel competes in a discus event Tuesday June 23, 2015, during the Warrior Games held at Quantico Marine Base, Virginia. (Carlos Bongioanni/Stars and Stripes) MARINE CORPS BASE QUANTICO, Va. — Anthony McDaniel had just been lowered into his wheelchair from a platform where he had been seated for throwing the discus at the Warrior Games.

Nearby, a folded tripod leaning against a chair fell to the ground. In gentlemanly fashion, McDaniel instantly maneuvered his wheelchair into position to retrieve the tripod for the reporter who dropped it.

McDaniel, 26, may have lost two legs and part of his left arm from war injuries, but he hasn’t lost a strong conviction about being polite.

“Regardless if you’ve got all your limbs or you have none at all, politeness comes from within,” said the medically-retired Marine with southern roots who names Pascagoula and Gautier, Miss., as his home towns.

A good dose of humility also seemed to reside inside the triple-amputee athlete who was a bit evasive, giving a generic reply when asked how he typically performs at the Games. “I do pretty well. I just go out there and try to give it my all.”

Pressed to be a little more specific, McDaniel acknowledged winning “some medals.”

Eventually, he spilled the beans that he won seven golds at the Warrior Games last year while competing in seven events: discus, shot put, four track events (100- , 200- , 400- and 800-meter wheelchair races) and basketball.

This year, competing in his fourth Warrior Games, McDaniel became ineligible for the basketball event because he tried out for the U.S. Paralympic team. That placed him in a “high-performance” pool of players.

From the sideline, Capt. James Ferguson, the director of external media for the Warrior Games, cheered each time McDaniel threw the discus.

“It’s really cool watching him,” said Ferguson, who also recalled witnessing the horrific scene in Kijaki, Afghanistan, on Aug. 31, 2010, when an improvised explosive detonated, engulfing McDaniel and his squad leader, Sgt. Josh Frasier, in a massive cloud of smoke.

Looking down from an elevated observation position several hundred yards away, then-1st Lt. Ferguson, who commanded the platoon in which McDaniel and Frasier served, shuddered as the scene unfolded.

It was like “replaying a movie” he’d already seen too many times.

“We had a bad stretch that August,” Ferguson recalled. “Two earlier IED ambushes resulted in the deaths of two Marine brothers.”

Their unit — part of “India” Battery (3/12), 1st Battalion, 11th Marine Regiment — had been sidelined for a number of days as a “significant sand storm” blew through the area. The storm was so severe and air visibility so poor, “red air” conditions were set. That meant the Marines would not have any air support, including from helicopters performing casualty evacuation missions.

“We had to just hunker down and wait for the storm to pass,” said Ferguson, who added that enemy forces take advantage of such situations to get busy laying new IEDs.

So the Marines knew they would have to re-clear areas they had cleared before the storm descended on them.

McDaniel volunteered to be the lead sweeper, and on the second day of clearing IEDs, he got hit.

Separated by fields that were suspected of having land mines from the days of the Soviet occupation, Ferguson, who had just celebrated his 25th birthday a few days earlier, felt “utterly helpless” and intense frustration.

“It makes you so angry,” Ferguson said. “I will take my Marines into a gun fight any day, and we’re going to win. But you can’t shoot back at an IED.”

As a medevac helicopter transported the wounded to Camp Leatherneck, Ferguson didn’t hold much hope that McDaniel would survive his injuries.

Almost five years have passed, and Ferguson said it’s “really powerful” to see how far McDaniel has come. “He’s filled with life and love. He draws people in. To see someone such as Anthony, who has every excuse in the world to be down, still focus on what’s important. He helps many of us who struggle with the mental and emotional impacts of war.”

Frasier, who was next to McDaniel and suffered a concussion and shrapnel wounds in the 2010 blast, flew in from Vero Beach, Fla., on Friday to watch McDaniel compete at Quantico.

“The last time I saw him in water was pretty funny,” Frasier said, recalling how he and McDaniel had to tread water for five minutes while dressed in their camouflage uniforms to get swimming qualifications as part of annual training not long before the incident in Afghanistan.

There’s an easy way and a hard way to do it, said Frasier, who recalled how McDaniel was looking very nervous and anxious as he began sinking. Frasier said he showed McDaniel how to use the shirt blouse to capture an air bubble to stay afloat, then sit back and relax, but McDaniel couldn’t get the hang of it.

“He made it, but not the way I did it,” laughed Frasier. “He basically muscled his way through five minutes of treading water.”

Frasier, who left the Marine Corps after eight years, says he regularly hears people call him a hero for his service. But it doesn’t settle right with him.

“To me, these guys are real heroes,” he said of the wounded warriors competing in the games. “The way they face adversity and overcome. The thing about Anthony is he does it with a smile on his face every day.”

Frasier added that one of his greatest pleasures as a former Marine in a leadership position was watching young Marines such as McDaniel grow into men. Of McDaniel, he noted: “He’s a stronger person now. It’s truly amazing.”

As for McDaniel, who never heard of the Warrior Games before he was asked to try out for basketball and track events in 2012, the games have a special place in his heart.

“I love the Warrior Games; I love the people. It’s such a good place to be. It’s a healing place, just being here. It’s a heart healing. Meeting new people. Seeing old faces. To see their families. To spend that friendly competition time together, it’s amazing.”