Defense Secretary Chuck Hagel answers questions from wounded warriors during a town hall meeting at the Center for the Intrepid at Brooke Army Medical Center on Joint Base San Antonio, Jan. 8, 2014. (DOD photo)

Defense Secretary Chuck Hagel answers questions from wounded warriors during a town hall meeting at the Center for the Intrepid at Brooke Army Medical Center on Joint Base San Antonio, Jan. 8, 2014. (DOD photo) 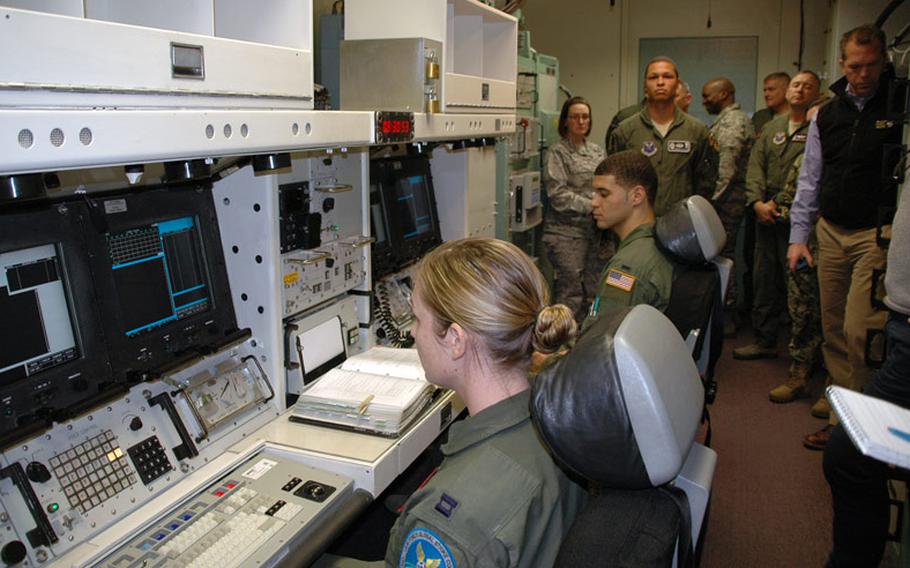 Servicemembers sit inside a nuclear launch control simulator at F.E. Warren Air Force Base used to train missile officers. The simulator is a mockup of a real launch control center. (Jon Harper/Stars and Stripes)

WASHINGTON — Cheating, drug use allegations and reported morale problems in the U.S. nuclear missile force prompted Secretary of Defense Chuck Hagel on Thursday to order a review of the management and culture of U.S. strategic deterrence forces.

“Personnel failures within this force threaten to jeopardize the trust the American people have placed in us to keep our nuclear weapons safe and secure,” Hagel said in a memo to top Pentagon officials.

Although Hagel does believe the U.S. nuclear arsenal remains safe and effective, recent scandals “raise legitimate concerns about the department’s stewardship of one of our most sensitive and important missions,” Pentagon press secretary rear Adm. John Kirby told reporters in Washington.

Hagel wrote in the memo that he and Chairman of the Joint Chiefs of Staff Gen. Martin Dempsey would soon meet with key leaders of the nuclear force in Washington. One agenda item will be an order to produce an action plan within 60 days aimed at identifying and fixing personnel problems.

“This particular issue isn’t about infrastructure, it’s not about modernization of weapons, it’s not about the next generation of nuclear submarines,” Kirby said. “This is really about the people inside the nuclear deterrent force.”

Among the likely topics the group would delve into, Kirby said, are questions about “growth and development of people who work in that force, their opportunities, incentives they do or do not get, morale issues.”

In a recent New York Times article, former nuclear launch officers spoke of the pressures of their jobs, including the extreme difficulty of proficiency tests — an incentive to cheating, they said. Moreover, during the wars that followed the 9/11 attacks, many felt sidelined in a military that had refocused from Cold War threats to hunting down terrorists. Hagel also is ordering an independent review by experienced former nuclear weapons officials to assess the DOD’s action plan. The independent review is expected to begin within weeks and be complete 90 days later.

Hagel intends to hold leaders who have failed accountable, Kirby said, adding that the investigation has to first proceed before any decisions on meting out consequences.

The Air Force announced last week it had suspended 34 nuclear missile launch officers believed to have cheated on proficiency tests. And earlier this month during a visit by Hagel to F.E. Warren Air Force Base, Wyo., the Air Force confirmed several launch officers were being investigated for drugs.

Of nearly 500 missile crew members who have been retested as a result of the cheating scandal, about 95 percent have passed, and the rest will follow standard Air Force remedial policies, he said.

Hagel has no question most members of the nuclear force are sound, but investigation is necessary to root out problems, Kirby said.

‘(W)rit large, we’re confident in the professionalism of the majority of the force,” Kirby said. “That said, clearly we’ve got some issues here, and at the very minimum there are some individuals inside the ICBM force that don’t or aren’t willing to live up to those standards.”