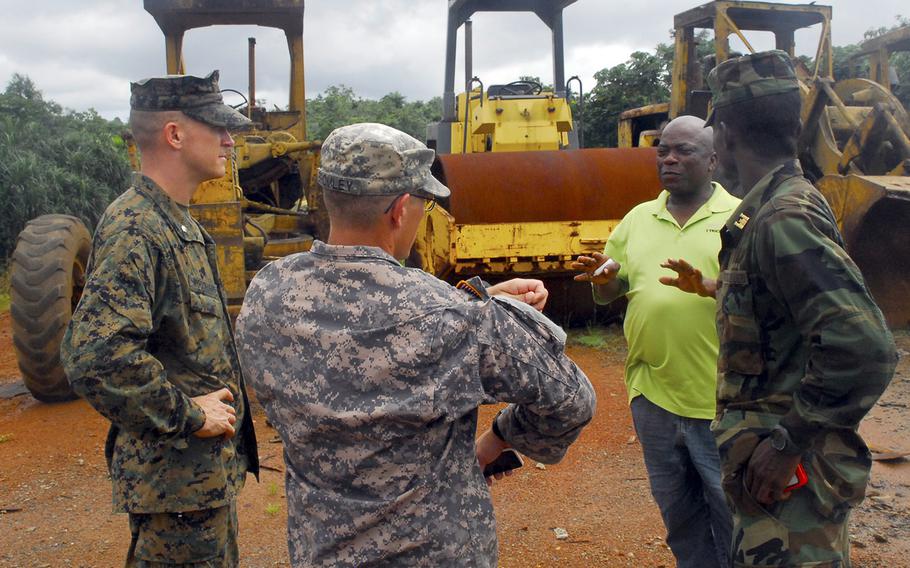 The order that originated with the Joint Chiefs of Staff takes effect immediately for most troops deploying to support Operation United Assistance, Pentagon officials said.

However, a spokesman for Chairman of the Joint Chiefs of Staff Gen. Martin Dempsey said air crews and others classified as transient personnel in West Africa will not be subject to what the Pentagon is calling an “enhanced monitoring” period.

As long as such personnel avoid contact with people in Africa who are not being monitored daily for the disease, they likely will follow an earlier policy that requires self-monitoring for Ebola symptoms and continue conducting operations, Air Force Col. Edward W. Thomas Jr. said in an email to Stars and Stripes.

The Army has quarantined about 40 soldiers who returned over the weekend from deployment in Liberia, placing them in isolation at their home base in Vicenza, Italy, even though the Defense Department says they show no disease symptoms.

Officials have repeatedly said the vast majority of deployed troops, whose numbers could reach 4,000, will be doing logistical and engineering tasks and should have no contact with the disease.

Many details about how the order will be carried out are still uncertain, officials said.

An implementation plan from the Joint Chiefs is due to Hagel within 15 days, Pentagon press secretary Rear Adm. John Kirby said in a written statement.

“The secretary believes these initial steps are prudent given the large number of military personnel transiting from their home base and West Africa and the unique logistical demands and impact this deployment has on the force,” Kirby said. “The secretary’s highest priority is the safety and security of our men and women in uniform and their families.”

The order creates a gulf between procedures for civilian and military responders who return from West Africa, where some 5,000 people have died from largest outbreak of Ebola ever.

According to new guidelines from the Centers from Disease Control and Prevention released Monday, even civilians who are directly exposed to Ebola should be subject only to voluntary quarantine and monitoring by a health professional for symptoms. Infectious disease experts say Ebola cannot be transmitted in the absence of illness symptoms.

But military members will be put in controlled monitoring even though officials say they expect troops to have no contact with infected people.

Speaking to an audience at a policy conference Wednesday in Washington, Hagel said there are differences between the U.S. troops ordered to Liberia and civilians – frequently experts in infectious diseases – that justify the order.

“The fact is the military will have more Americans in Liberia than any other department,” he said. “Number two, our people are younger; the cohorts are different; they are not volunteers.”

“The military is in a different situation obviously, because … they are not there voluntarily,” Obama said. “They are already — by definition if they’re in the military — under more circumscribed conditions.”

Obama administration officials are concerned that strict quarantine requirements could deter civilian healthcare workers from going to West Africa to help those infected. A nurse who was put into involuntary isolation upon returning to the U.S., complained that her civil rights were being violated. She has since been released.

The military community, however, wants the 21-day isolation policy for troops, Hagel said.

“This is also a policy that was discussed in great detail by the communities, by the families of our military men and women,” he said. “And they very much wanted a safety valve on this.”

Warren said the military traditionally follows strict protocols governing the return of troops at the end of deployments.

“We’ve found over the years that tightly controlled redeployment procedures serve us well,” he said.

A researcher who works with the Ebola virus, David Sanders, an associate professor of biology at Purdue University, said that in the civilian world at least, placing people in quarantine who aren’t exhibiting symptoms makes little sense from a scientific or public policy standpoint.

“The idea of quarantining people who are not sick — that’s a terrible way of going about things,” he said. “It’s like imprisoning people because you think they may commit a crime.”

But Sanders said the military may have other factors to consider, including the possibility of damaging political effects if troops brought the disease home. Military personnel, moreover, differ from civilians because they’re accustomed to following difficult orders to accomplish missions.

Hagel received the chiefs’ recommendation on Tuesday, shortly after Army leadership decided to isolate Maj. Gen. Darryl Williams and 10 other soldiers for three weeks to ensure they are not infected after spending time in Liberia.

They and about 60 other soldiers arriving in Vicenza, Italy, will be allowed no physical contact with family members but will have access to telephones and the Internet. Army officials say the returning troops will work while in isolation, and they’ll have access to a gym and entertainment facilities during off hours. Meals prepared on base will be delivered to the holding site, and troops will undergo twice daily health checks to monitor for signs of Ebola infection.

Hagel said Wednesday that he had ordered the Joint Chiefs to review the isolation policy within 45 days.

In his written statement, Kirby said “This review will offer a recommendation on whether or not such controlled monitoring should continue based on what we learn and observe from the initial waves of personnel returning from Operation United Assistance.”