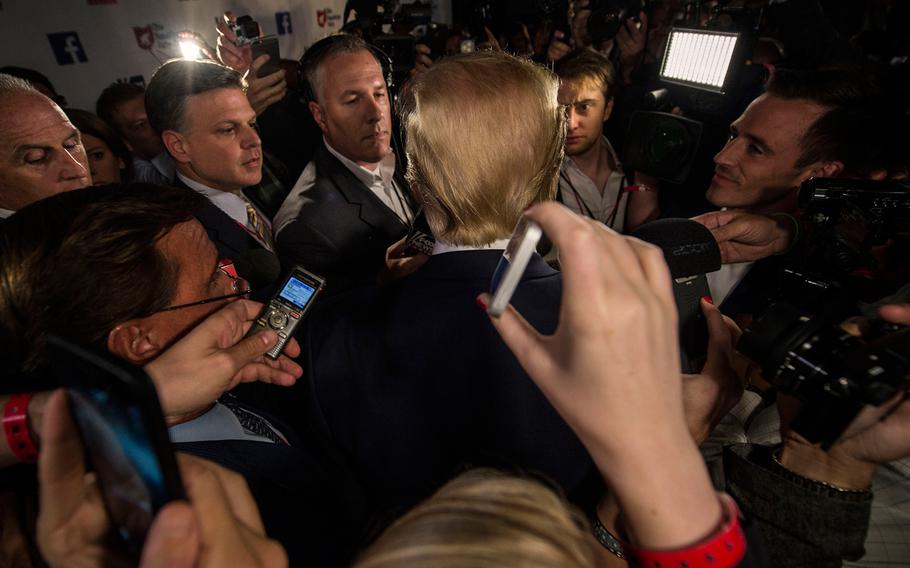 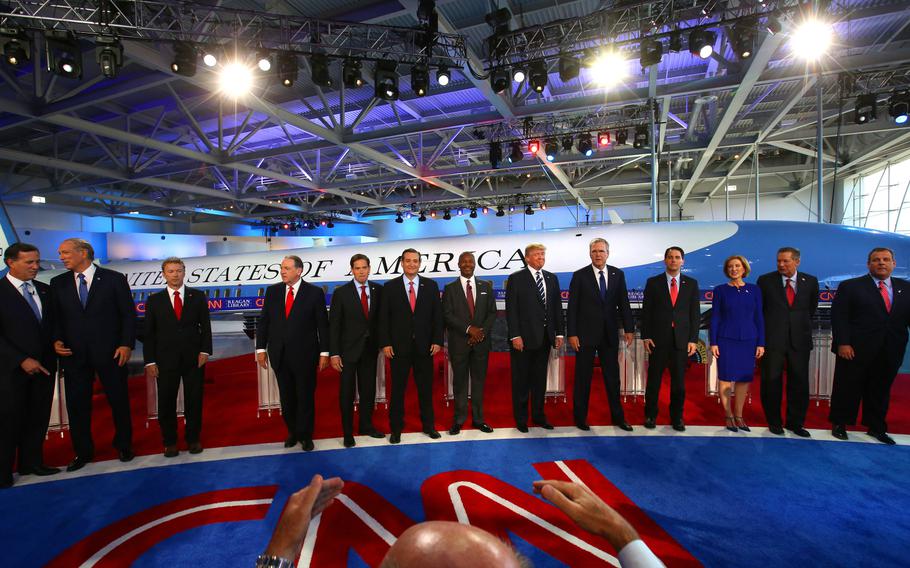 Republican presidential candidates take the stage for the start of the debate at the Reagan Library in Simi Valley, Calif., on Wednesday, Sept. 16, 2015. (Rick Loomis/Los Angeles Times/TNS) 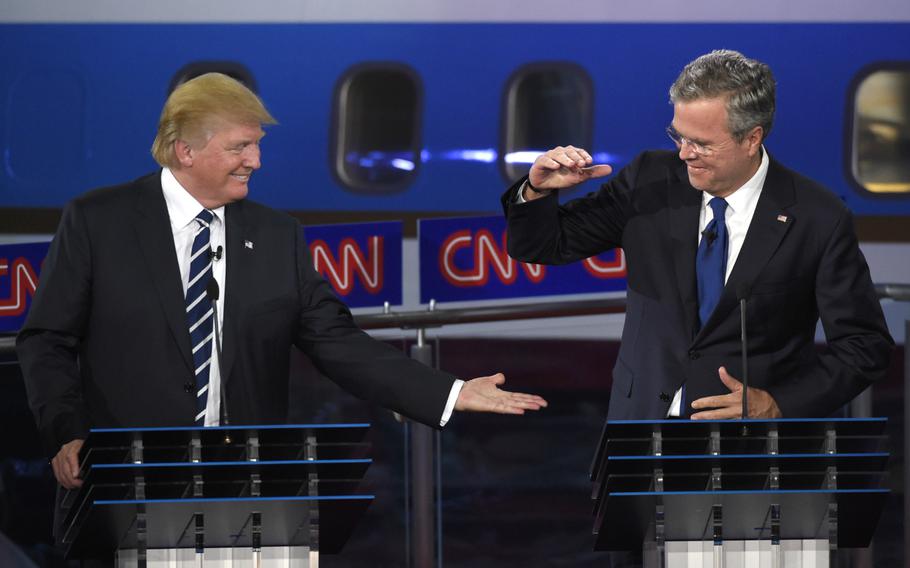 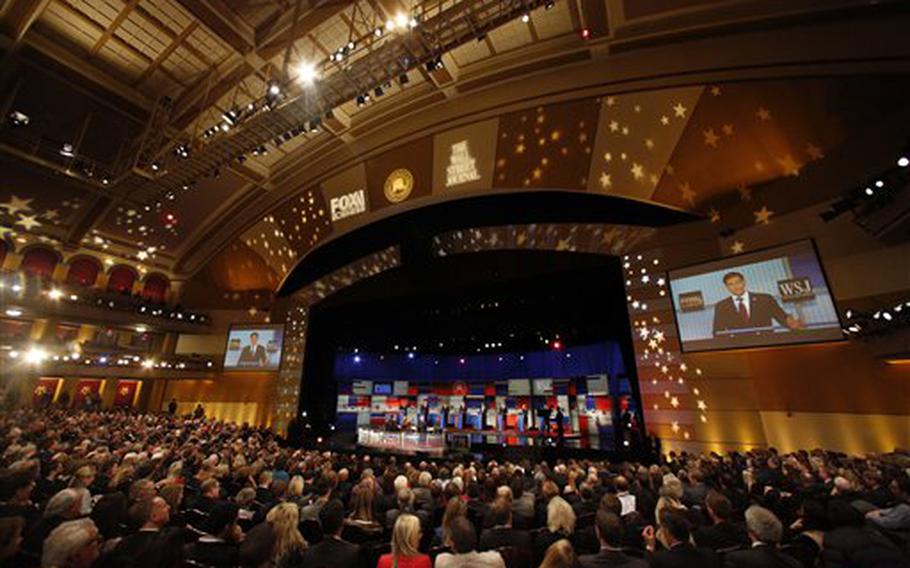 WASHINGTON — Republican officials and leading figures in the party's establishment are preparing for the possibility of a brokered convention as businessman Donald Trump continues to sit atop the polls in the GOP presidential race.

More than 20 of them convened Monday near the Capitol for a dinner held by Republican National Committee Chairman Reince Priebus, and the prospect of Trump nearing next year's nominating convention in Cleveland with a significant number of delegates dominated the discussion, according to five people familiar with the meeting.

Weighing in on that scenario as Priebus and Senate Majority Leader Mitch McConnell, R-Kentucky, listened, several longtime Republican power brokers argued that if the controversial billionaire storms through the primaries, the party's establishment must lay the groundwork for a floor fight in which the GOP's mainstream wing could coalesce around an alternative, the people said.

The development represents a major shift for veteran Republican strategists, who until this month had spoken of a brokered convention only in the most hypothetical terms - and had tried to encourage a drama-free nomination by limiting debates and setting an earlier convention date.

Now, those same leaders see a floor fight as a real possibility. And so does Trump, who said in an interview last week that he, too, is preparing.

Because of the sensitivity of the topic - and because they are wary of saying something that, if leaked, would provoke Trump to bolt the party and mount an independent bid - Priebus and McConnell were mostly quiet during the back-and-forth. They did not signal support for an overt anti-Trump effort.

But near the end, McConnell and Priebus acknowledged to the group that a deadlocked convention is something the party should prepare for, both institutionally within the RNC and politically at all levels in the coming months.

When asked Thursday about the dinner and convention planning, Sean Spicer, the RNC's chief strategist and spokesman, said: "The RNC is neutral in this process, and the rules are set until the convention begins next July. Our goal is to ensure a successful nomination, and that requires us thinking through every scenario, including a contested convention."

During the dinner, attendees delved into what exactly a brokered convention would look like. It would happen if no candidate was able to win the nomination on a first-ballot vote, starting a multi-ballot exercise on the floor of the Quicken Loans Arena that could extend for hours until a candidate has secured sufficient support.

Many of the delegates are "bound" on the first ballot, meaning they must support the candidate they chose in primaries or at state conventions. But that restriction would lift if no nominee is chosen. The jockeying for delegates on a second ballot - or third, fourth or fifth - would be intense and full of political dealmaking, thus the term "brokered" convention.

Upon leaving the Monday dinner, several attendees said they would share memos about delegate allocation in each state as well as research about the 1976 convention, the last time the GOP gathered without a clear nominee.

The rules for selection of delegates are complicated - and largely decided state by state. Most states now elect delegates on a proportional basis, with at-large statewide delegates supplemented by delegates awarded by each congressional district.

This makes the task of securing delegates more difficult in many states, because Republican candidates must, in some cases, push for support in overwhelmingly Democratic districts.

They must also qualify for each state's ballot in order to win any delegates at all, making the arduous series of state-by-state rules governing ballot access a potentially critical factor as well.

The campaign of Sen. Ted Cruz, R-Texas, seems to have mastered the intricacies of state ballot-access rules and is said to have qualified in more than 40 states and territories, more than any other candidate.

The emerging consensus at the highest levels of the Republican Party about how the 2016 race could unfold comes after a fresh wave of polls showing Trump leading in early-voting states and nationally, even as he continues to unleash incendiary comments such as his proposal to block Muslims from entering the United States. It also marks the close of a months-long chapter in the campaign when a brokered convention was considered a fanciful concept rather than a possibility that merited serious review.

"That said, people shouldn't be panicking, and I think things will calm down when people in the party leadership realize there are core truths to what Trump is saying and he's not trying to take down the party. For many conservatives, his candidacy is a positive disruption," Bennett said. "Let things run their course."

If anything, he added, the GOP convention "may get a ton of interest. People will want to tune in. They won't tune in to the Democratic coronation."

Stuart Stevens, a former adviser to Mitt Romney, said the need to plan for a brokered convention is not necessarily all about Trump.

"Beyond Trump, what you're seeing is the party bracing for a potential 'Hunger Games' scenario where you have a different person win each of the first four primaries and they all have the resources to slug it out until the convention," Stevens said. "It's smart to think of contingencies, and if you actually spend time with the numbers, it's possible someone won't quickly get the number they need to be the nominee."

The prix fixe three-course meal at the Source, an Asian fusion restaurant near the Capitol, was part of a regular invitation-only dinner series hosted by Priebus in which he solicits candid input from party leaders. Those familiar with Monday's deliberations spoke on the condition of anonymity to describe the private matter.

It was not supposed to unfold this way. After Romney's 2012 defeat, which followed a protracted nomination season, the RNC moved to speed up the process. In August, Priebus predicted a swift and relatively painless nomination contest, two months after Trump jumped in the race. "We're going to have a nominee probably by the end of March or the beginning of April," he said on NBC's "Meet the Press."

The problem facing the party - a crowded field led by a billionaire firebrand - was evident Thursday, a deadline to qualify for the Virginia presidential primary. According to the state GOP, 13 candidates qualified. Given the acrimony and uncertainty - and the relative ease of fundraising - there is little incentive for any of them to drop out.

RNC members will huddle in January in South Carolina to discuss the convention. Although no rule changes can be implemented until the convention, the people familiar with the dinner gathering said top Republicans would like to begin that winter meeting with more clarity about how the RNC would handle a contested convention.

When asked by The Washington Post last week what he thought about a contested convention, Trump said he is getting ready for one.

"I don't think it's going to be a brokered convention," he said. "But if it is, I'd certainly go all the way - and I think I'd have a certain disadvantage."