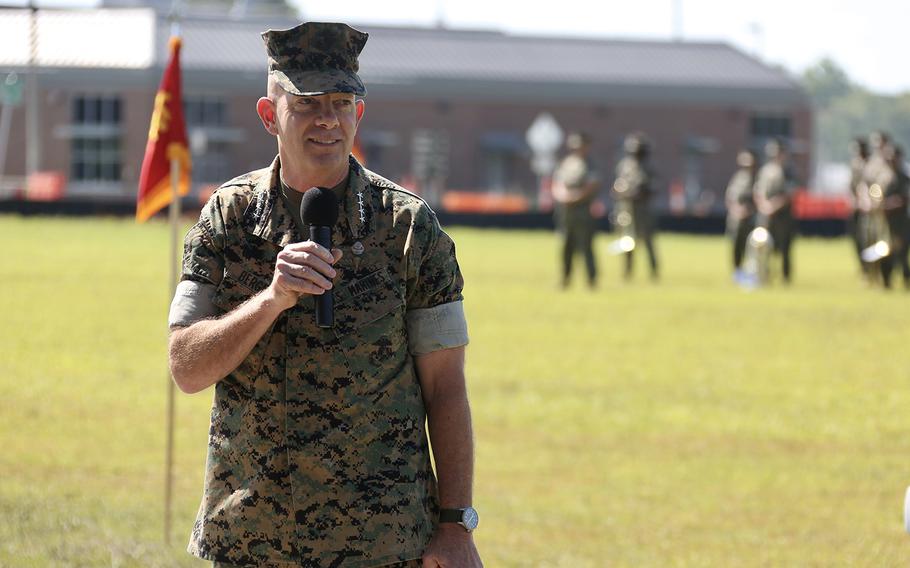 WASHINGTON — The Marine Corps needs to improve its parental leave options quickly if the service wants to retain its best Marines, as unexpected hurdles have delayed changes, the service’s top general said Thursday.

“We have to extend maternity leave, we have to be a lot more flexible than we are right now. But we have to stay within Department of Defense policy as well, so I'm working in a box,” Gen. David Berger, the commandant of the Marine Corps, said during an interview with Stars and Stripes.

Berger released guidance in July 2019 shortly after he became the commandant that stated the service should not ask Marines to choose between being the best parent or the best in their military career.

“Our parental/maternity leave policies are inadequate and have failed to keep pace with societal norms and modern talent management practices. We fully support the growth of our Marine families, and will do everything possible to provide parents with opportunities to remain with their newborns for extended periods of time,” the guidance stated.

The guidance also stated the Marine Corps would consider up to one-year leaves of absence for mothers to be with their children before returning to finish their service obligations.

In the year since the guidance was issued, Berger said he has found updating the parental leave policy more complicated than he anticipated.

“It's taken longer than I had hoped for. But I didn't realize, I think to the extent I should have maybe last summer, that this would require coordination with the rest of the services and secretary of defense and all to make sure that we had a policy that was executable, supportable,” he said.

Like the other services, the Marine Corps adheres to the Defense Department’s Military Parental Leave Program. A birth parent can now take 42 days — 6 weeks — of maternity convalescent leave to recover medically from the birth, starting the day after they are released from the hospital or facility where they gave birth.

The primary caregiver leave is also for 42 days and is given to the Marine designated as providing primary care to the child, which is usually assumed to be the birth parent. That leave can be taken consecutively with the maternity convalescent leave or taken any time within the first year of the child’s birth, foster care or adoption.

The Navy and Marine Corps provide only 14 days of leave to “secondary caregivers,” whereas the Army and Air Force allow up to 21 days of leave.

The Marine Corps needs to work towards parental leave that addresses two “time frames” related to pregnancy and raising a family, Berger said. The first time frame is after the baby is delivered and the second is when the child is being raised and parents might need to make a decision about their careers, he said.

“The parents are going to reach another kind of decision point at some time and where it's clear to them under the current policies and all, either I can have a career or I can raise a family, but I don't see how I can do both. So we got to attack both of those time frames,” Berger said.

One option is the Marine Corps’ career intermission program, which allows people to take time off for things such as education and could be used for both of those family time frames, according to Berger. The Marine Corps has not done enough to publicize this option or make it simple to apply, he said.

The Marine Corps must find the right solution that can support not just mothers and fathers who are Marines, but also Marines who might be married to someone in another military branch, he said.

“It's not something that I can do, the Marine Corps can do, all on their own and just go their own direction. So it is something we have to coordinate with the other services,” Berger said.

The bigger issue related to the parental leave is one of retention and making certain Marines do not feel they have to choose between continuing their careers and raising their family.

“We have to be able to keep the talent that we spent 10 years training, all that experience, all that training is going to walk out the door if we can't be more flexible, if we can't figure out a way for them to stay, to have it both ways.”

The Marine Corps needs to get after the leave policy in the next six months, Berger said.