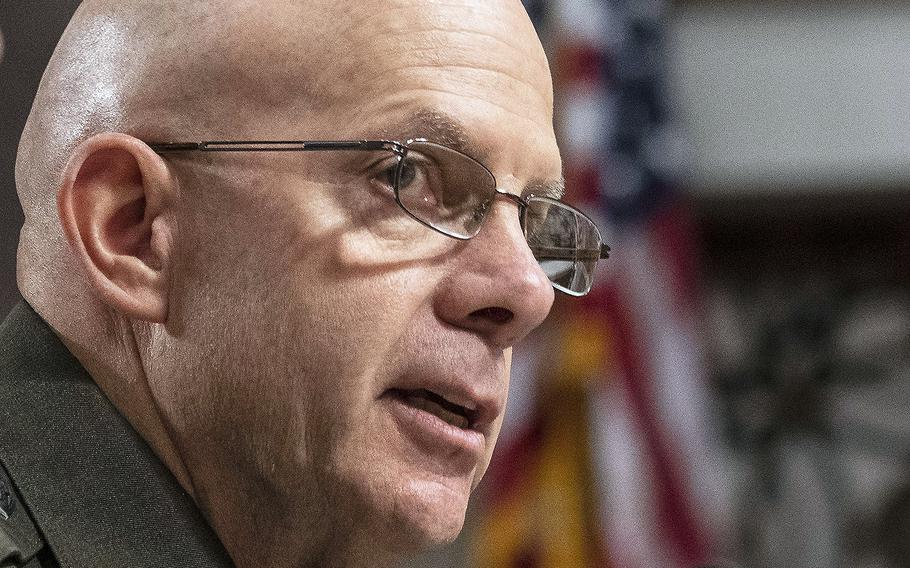 WASHINGTON — The Marine Corps must listen more to Marines when it comes to issues of diversity and inclusion amid the ongoing national conversation about systemic racism that erupted a few months ago, said Gen. David Berger, the service’s commandant.

“I'll never have lived the life of an African-American officer in the Marine Corps, I will not have lived that life. What I can do? Listen, understand, try to empathize, so that we can make adjustments within our service to change the way that some people view…either a conscious bias or an unconscious bias, either way,” Berger said Thursday. “We got to change the way that we discuss things, the way that we understand them. And that means a lot more listening.”

The military stepped forward with renewed attention towards its diversity and inclusion initiatives after the deaths of several African Americans this year involving law enforcement, including George Floyd in Minneapolis and Breonna Taylor in Louisville, Ky. The incidents sparked protests across the country.

The Defense Department and the Navy have recently established organizations to examine diversity, inclusion, and biases among the force and put forth a policy to fix issues that are found.

The Marine Corps already has a talent management council and executive council that was set up by former commandant Gen. Robert Neller within the service’s headquarters, according to Berger. It was formed after the Marines United scandal in 2017, when female service members were targeted online in a private Facebook group and their nude photos were distributed among the group’s members, which consisted of other active-duty service members.

The Marine Corps is focused on looking into the deeper reasons why certain groups of people are not as represented in specific career fields, such as in combat arms or aviation. Berger said they are starting to look at the beginning of a Marine’s career in their initial training and education to see what can be improved.

Marine officers compete during their six-month initial course at Marine Corps Base Quantico, Va., because the better they perform, better chance they have of selecting the specialty they want. But the Marine Corps has found not many African-American Marines are choosing combat arms, Berger said. For African-American Marines who go to aviation school, many of them do not select flying fixed-wing aircraft.

There is also the perception in the service that a Marine needs to be in combat arms in order to rise through the ranks.

Berger said it’s “not necessarily true,” but the perception exists.

“We have to bore into where it begins. In other words, from recruiting through the early stages of training, what is it that we're doing that we should look at to make sure that we start out as a more diverse force,” he said. “Because if we don't start out that way, we cannot fix it when somebody is a lieutenant colonel or a colonel. We can't make major adjustments at that point.”

Berger said the service is looking into how discussions occur with Marines when they are selecting a specialty and how those discussions impact their career choice.

In 2015, the Defense Department opened all military positions to female service members, removing all restrictions on careers and roles they can pursue. This allowed more women to pursue careers in combat roles such as infantry, which historically has allowed men to reach top positions within their respective service branches.

Advancement in the Marine Corps is dependent on a Marine’s performance and potential. Everything is earned.

“You have to perform, you've got to carry the load. You have to be able to do the job. So they are not going to be any handouts,” Berger said.

The commandant said he does not know how long it will take for the first woman to become commandant, but it is his job to ensure that paths for career advancement for women in the Marines is available.

It comes down to assignments and making certain that officials for all ranks “assign females, assign all of us, in a way that makes it possible to move,” he said. “I think the great move was a couple years ago that there are no barriers. Now the sky's the limit.”