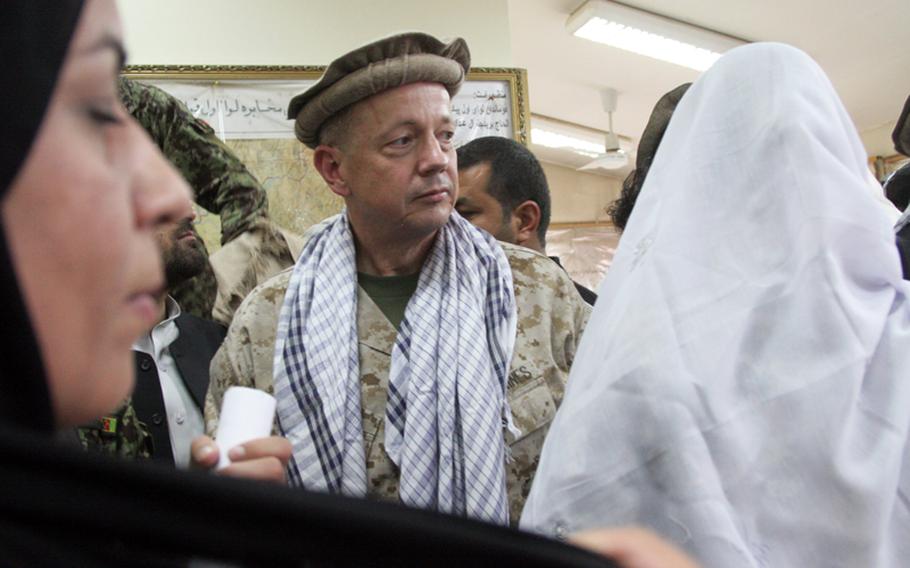 Gen. John R. Allen, pictured May 15, 2010, when he was deputy commander of U.S. Center Command, wears an Afghan hat and scarf as he leaves a special release ceremony for 11 Afghan detainees in Kabul, Afghanistan. (Dion Nissenbaum/MCT)

Gen. John R. Allen, pictured May 15, 2010, when he was deputy commander of U.S. Center Command, wears an Afghan hat and scarf as he leaves a special release ceremony for 11 Afghan detainees in Kabul, Afghanistan. (Dion Nissenbaum/MCT) 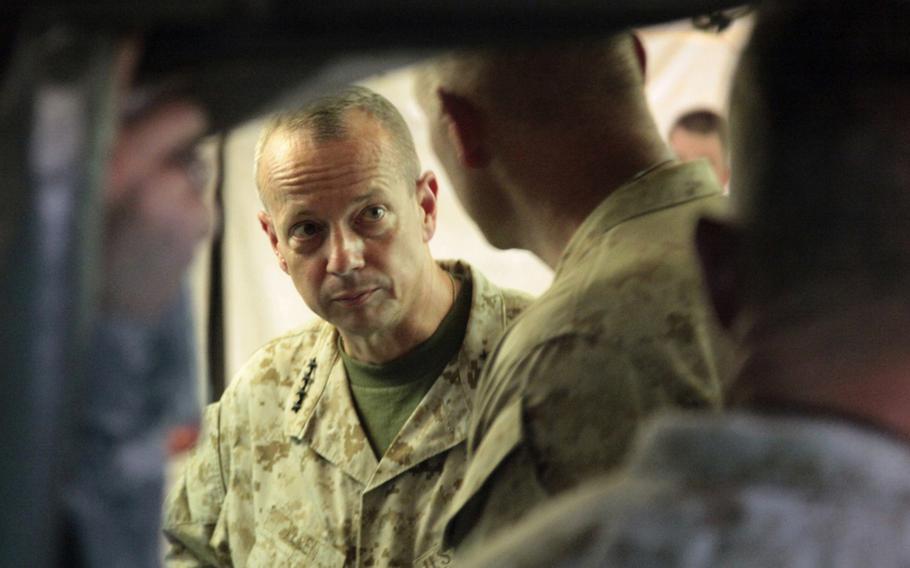 Gen. John R. Allen, commander of the International Security Assistance Force and U.S. Forces - Afghanistan, during a tour in August 2011 of a remote base in Gereshk district, Helmand province, Afghanistan. (Matt Millham/Stars and Stripes)

WASHINGTON — Defense Department investigators on Tuesday cleared Gen. John Allen, U.S. commander in Afghanistan, of suspicions that he carried on what was characterized as an “inappropriate” email exchange with a Florida socialite linked to the adultery scandal that prompted the resignation of retired Gen. David Petraeus from his job running the CIA.

It prompted the White House to announce Wednesday that Allen’s nomination to take over the prestigious role of NATO Supreme Allied Commander-Europe and head of U.S. European command would go forward, according to an Associated Press report.

Defense Secretary Leon Panetta ordered the investigation in November after the FBI delivered what were described as more than 20,000 pages of emails and documents related to Allen and Jill Kelley, a Tampa socialite with close ties to high-ranking officers at U.S. Central Command headquarters at MacDill Air Force Base, Fla.

Kelley helped set in motion the exposure of Petraeus’ affair when she showed harassing emails anonymously sent to her by Petraeus’ mistress, Paula Broadwell, to an FBI agent. The subsequent investigation uncovered her exchanges with Allen.

Defense officials at the Pentagon said some of the emails could be interpreted as “flirtatious and inappropriate.”

The Inspector General’s office later zeroed in on fewer than 100 emails for close scrutiny, assigning an unusually large team of 15 investigators to comb through them in an investigation that was concluded with unusual speed.

“We confirm that the investigation has been concluded and that we did not substantiate the allegations of misconduct,” IG spokeswoman Bridget Serchak said late Tuesday.

“The Secretary has complete confidence in the continued leadership of General Allen, who is serving with distinction in Afghanistan,” he said.

A spokesman said Allen was grateful for the support from friends, family and colleagues during the investigation. He’s also ready to continue with his work, Marine Maj. David Nevers said in a written statement.

“He remains focused, as he has always been, on leading the brave men and women of the ISAF team,” Nevers said.

Panetta placed the nomination on hold after the email allegations surfaced. Allen is scheduled to leave Afghanistan in February, when Marine Gen. Joseph Dunford Jr. will replace him as head of the NATO mission.

Stars and Stripes reporter Jennifer Hlad contributed to this article.