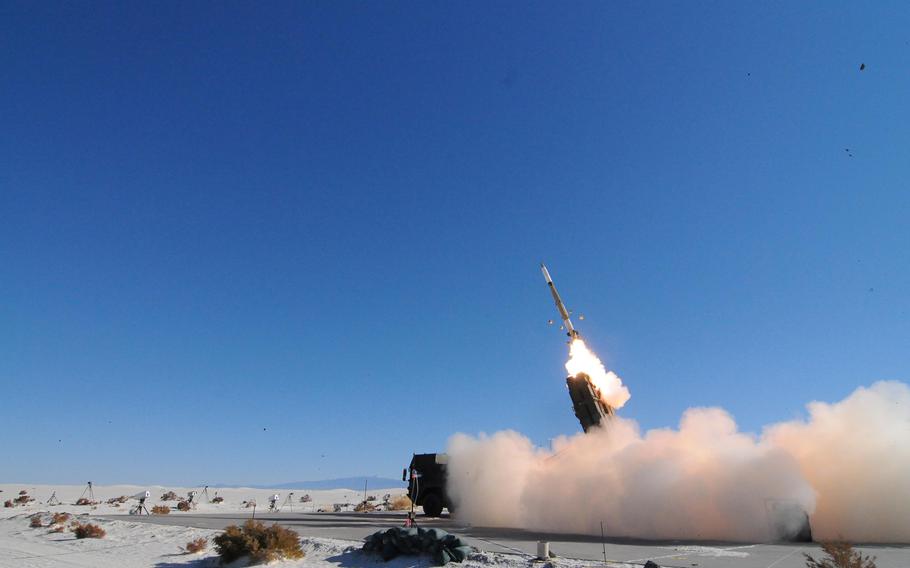 A missile is launched at an airborne target during a test of an air defense system at the Army's White Sands Missile Range, N.M., in November 2013. (U.S. Army)

The Defense Department does not know whether its hundreds of testing and training ranges in the U.S. are vulnerable to spying by foreign entities doing business near those properties, according to a report released Tuesday by the Government Accountability Office.

“DOD has not conducted a risk assessment that includes prioritizing ranges based on mission criticality, determining their vulnerabilities to foreign encroachment, and assessing the degree to which foreign encroachment could pose a threat to the mission of the ranges,” the study concluded.

In addition, neither the DOD nor the military services have determined which ranges are the most critical to protect, the report said.

Training ranges are challenged by many forms of so-called encroachment that inhibit training and testing, such as urban growth, competition for radio frequencies and airspace, noise and air pollution, endangered species and security threats.

Of the 533 testing and training ranges operated by the Army, Air Force, Marines and Navy around the world, 450 are on U.S. soil, the report said. The bulk of domestic ranges, 384, are operated by the Army. The ranges accommodate air-to-air and ground-to-air missile launches; live-fire artillery, armor and small-arms training; and ship and submarine maneuvers.

The GAO was mandated by the 2014 defense spending bill to review steps taken by the DOD to prevent and mitigate general encroachment of the ranges. Tuesday’s report focused only on encroachment by foreign entities.

Although no foreign countries are mentioned in the report, Congress and some federal agencies have been uncomfortable at times by the involvement of foreign firms in certain U.S. sectors. For instance, Dubai Ports World, owned by United Arab Emirates, was set to buy the management contracts of six major U.S. ports in 2006. But the purchase was delayed by Congress, and the firm dropped the purchase.

More recently, concerns have focused on ownership of U.S. firms by Chinese companies, whose ties to the People’s Liberation Army are sometimes unclear. In 2012, the House Permanent Select Committee on Intelligence issued an investigative report on two Chinese telecommunications companies — Huawei and ZTE — and recommended blocking mergers or takeovers by those companies in the U.S. because of their murky ties with the Chinese military.

China has a long history of industrial spying in the U.S.

Kevin Mandia, the founder of the cybersecurity company Mandiant, told CNN earlier this year that China was the most “pervasive” country in the quest to steal U.S. trade secrets.

For its report, the GAO interviewed officials from the Nevada Test and Training Range at Nellis Air Force Base, Nev.; the Fallon Range Training Complex at Naval Air Station Fallon, Nev.; Eglin Air Force Base, Fla.; and the Army’s White Sands Missile Range in New Mexico. The sites were chosen because they represent three of the services and are located near federally managed lands on which foreign encroachment has been a concern.

There are a large number of mining claims near Fallon Range and extensive gas exploration in the Gulf of Mexico near Eglin, which is home to the Integrated Training Center for the F-35 Joint Strike Fighter, the report said.

Navy and Air Force officials told the GAO that the lack of an established criteria and the wide range of capabilities at hundreds of ranges make it difficult to determine how critical the ranges are relative to each other. The officials said there wasn’t a readily available methodology for determining which ranges “would be the most valuable collection points for foreign adversaries to trying to gather intelligence and which ranges house the most sensitive test and training activities,” the report said.

Officials at Navy and Air Force headquarters and at the four ranges told the GAO that “they had concerns about the number of investment-related projects by foreign entities occurring near their respective ranges — projects that they state could pose potential security threats.

“Those officials told us that they were particularly concerned that foreign entities may have an increased ability to observe sensitive military testing or training activities if they are able to establish a persistent presence outside the services’ test or training ranges.”

Officials at Fallon and Nevada Test ranges said they had observed a number of energy and mining projects near their sites that may be owned or controlled by foreign entities.

The services, however, have not conducted formal assessments to determine whether such vulnerabilities exist at their ranges, the report said.

The GAO recommended that the DOD determine vulnerability, critical need and threat exposure of each of the ranges.