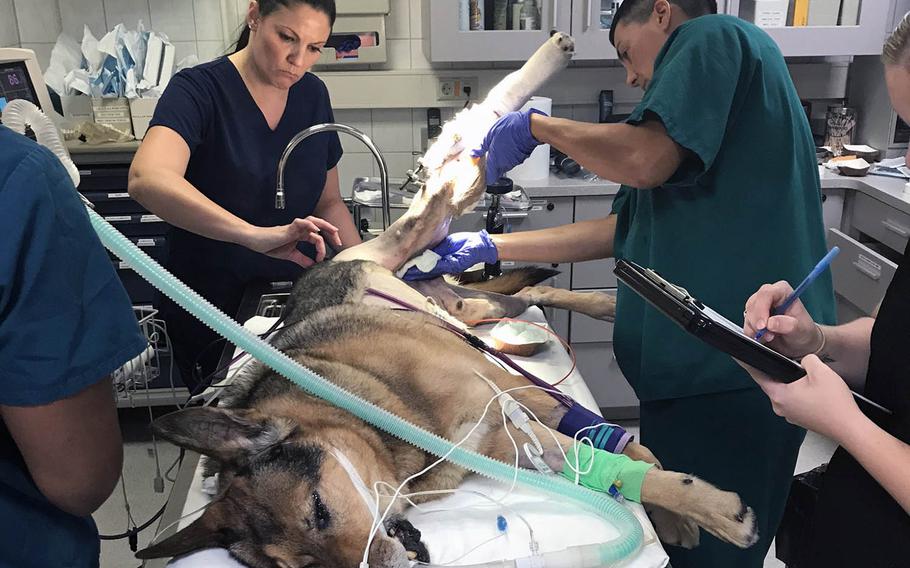 Maj. Renee Krebs, a veterinary surgeon with Veterinary Medical Center Europe, prepares Alex, a military working dog, to have his leg amputated Aug. 15, 2018, at the medical center in Kaiserslautern, Germany. Alex was wounded in Afghanistan by shrapnel in his leg and back. (Ashley Patoka/Regional Health Command Europe)

Maj. Renee Krebs, a veterinary surgeon with Veterinary Medical Center Europe, prepares Alex, a military working dog, to have his leg amputated Aug. 15, 2018, at the medical center in Kaiserslautern, Germany. Alex was wounded in Afghanistan by shrapnel in his leg and back. (Ashley Patoka/Regional Health Command Europe) 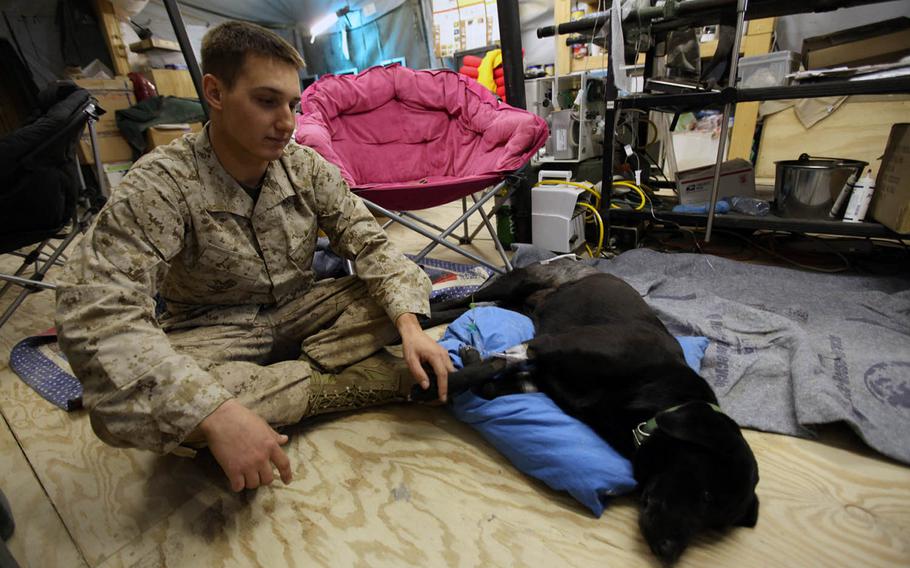 Lance Cpl. Eric Devine, of 1st Battalion, 6th Marine Regiment, sits beside Dakota, an improvised explosive device detection dog, as she recovers at Camp Leatherneck the day after being shot in the hip on April 15, 2010, in Marjah, Afghanistan. (Heidi Agostini/U.S. Marines Corps) 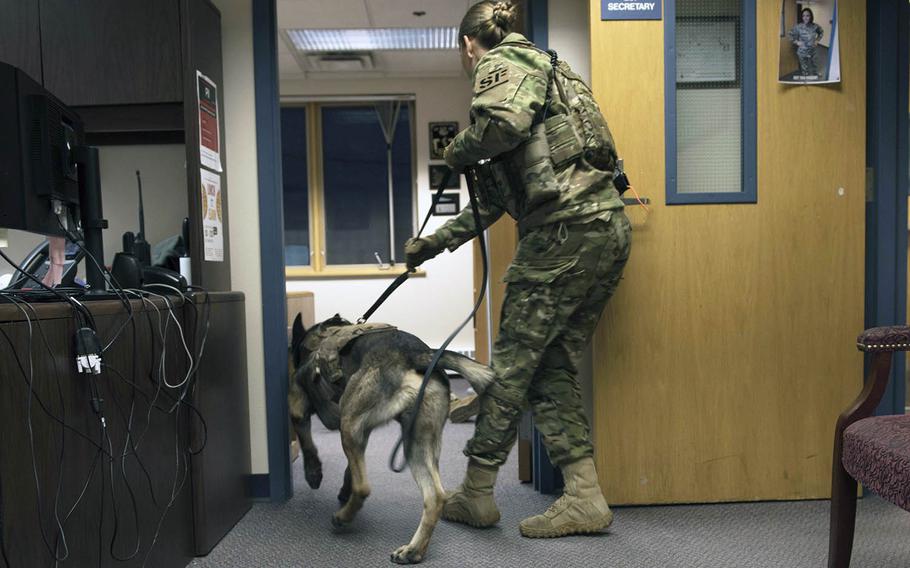 An airman guides her military working dog into a room during an exercise at Eielson Air Force Base, Alaska, Oct. 23, 2018. (Eric Fisher/U.S. Air Force)

Military working dogs have repeatedly proven their worth in combat zones during America’s lengthy wars in Afghanistan and Iraq, where their discerning snouts have sniffed out explosive booby traps better than any machine could.

But their work has come at a cost. A recent study found that of an estimated 2,600 war dogs deployed from 2001 through 2013 to those two countries, 92 died, primarily of gunshot wounds and explosions.

Now, a group of veterinarians and medical experts with the Department of Defense is urging funding for a trauma registry for military working dogs like that being used to collate and analyze battle injuries incurred by human warfighters.

The Army formed the Military Working Dog Trauma Registry Strategic Planning Group to look into the infrastructure needed for a working dog trauma registry, which the group described as “crucial to improve survival of [military working dogs] on the battlefield” in a white paper published in November.

A registry would uniformly create an abstract containing vital statistics on a particular dog, the nature of the medical issue, successful or failed treatments and outcome.

The planning group draws its members from the Department of Defense’s Military Working Dog Veterinary Service and the Joint Trauma System, the latter of which is tasked with reducing disease, injuries and deaths in the armed forces.

Measured by the Defense Department’s annual budget of more than a half-trillion dollars, the funding needed to develop and sustain such a working dog registry is miniscule.

Most of the raw data needed for a dog registry is being collected but not in “a centralized, over-arching manner,” said Col. Andy McGraw, director of the Military Working Dog Veterinary Service at Lackland Air Force Base, Texas.

“When I was deployed in 2010, my ability to look at and evaluate military working dog mortality data was limited to my time on the ground there in Afghanistan,” said McGraw, a veterinarian and member of the trauma planning group. “I don’t know what happened before I got there; I don’t know what happened after I [left] there because the information was classified and, also, it was kind of disjointed and disconnected.”

A centralized registry — durable over time and multiple deployments — is vital, he said.

“Unless we have the data that tells us what are the more life-limiting problems that affect working dogs in an operational setting, how do we know how to best tailor our training, our equipping and other things to better serve the needs of both the dogs and the handlers?” he said. “Is it heat injury? Is it IED blasts? Is it gunshot wounds? Is it blunt-force trauma?

“I can think that most dogs are suffering from gunshot wounds, but what if that’s not the reality on the ground?” he said. “And maybe that was the case during the time I was deployed, but maybe I was deployed at a time that’s not representative of the whole 15 years we’ve been deployed.

“By capturing that data over a longer period of time, it’s going to help us identify holes in our training, for example,” he said. “I use the example of IED blasts. I did not learn one thing in veterinarian school about how an improvised explosive device could injure a dog – or the injuries that fall out from that.”

The first detailed study of the causes of death in military working dogs was published last fall in the journal Military Medicine. Of the 92 dog fatalities analyzed from 2001-13 in Iraq and Afghanistan, 31.5 percent were from gunshot wounds, 26.1 percent from explosions and 9.8 percent from heat stress. Among other causes were drowning, electrocution, vehicle impact and a helicopter crash.

Yet despite being the most comprehensive study of its kind, the authors concluded that “limitations to the available data undermine the potential for our results to inform prevention of injuries and advances in medical care.”

Researchers were not even able to determine the actual number of dogs deployed to those two conflict zones during that 13-year period because some data was classified. Without a comparison group of dogs deployed in the same period that did not die, the researchers were unable to identify risk factors for death among working dogs.

The study was hampered by “missing records, missing data within the available records, and inconsistencies in documentation.” Some records listed the cause of death simply as “euthanasia.”

A formal dog registry could fill in those gaping holes, leading to better outcomes for wounded or injured dogs.

The conclusions drawn from such data could, for instance, drive development of protective equipment for dogs or changes to clinical practice guidelines used for treating war dogs.

“It can drive research funding and research projects [aimed] toward helping us give better care to these patients,” McGraw said.