From Nepal’s peaks to Finland’s arctic tundra, troops meet for training in Alaska 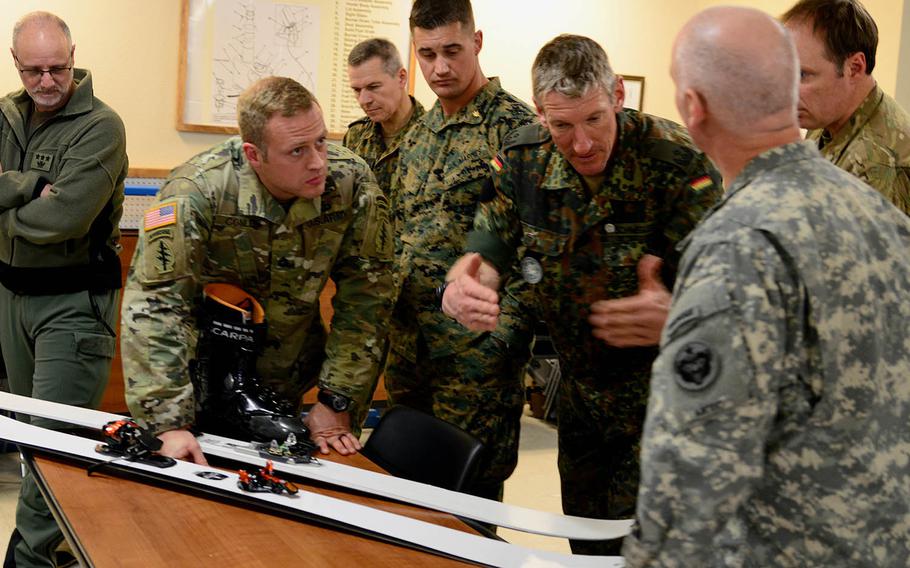 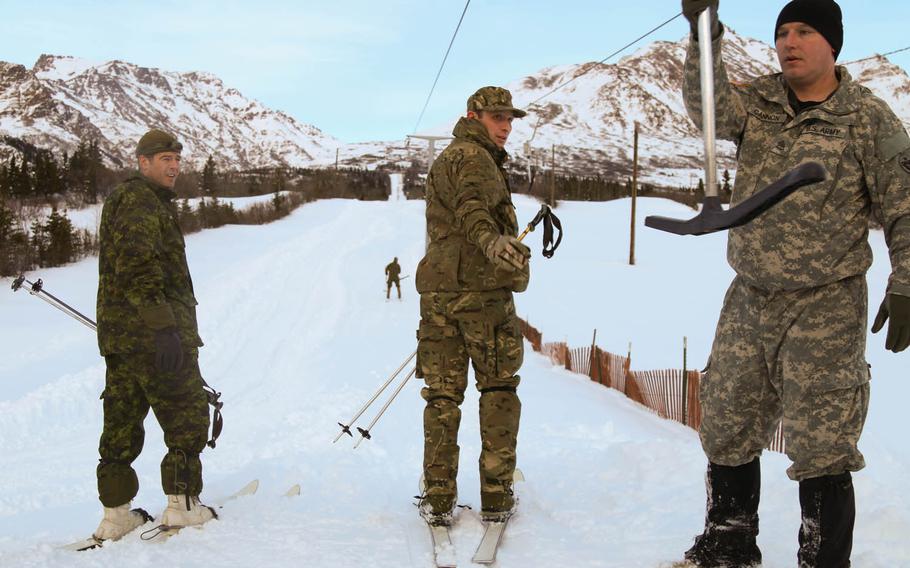 For those who regularly deploy to cold-weather terrain, some things are taken for granted.

Don’t touch exposed metal with a bare hand, and bring some type of fuel to melt snow to drink. Eating it frozen will only dehydrate you.

Everything takes longer when you’re weighed down with equipment and supplies needed to survive sub-zero temperatures. And moving through fallen snow on skis or snow shoes might look slick in a James Bond film, but it can actually be plodding and cumbersome.

But there are many means to cope with these and other frigid realities, and representatives from armed forces from eight foreign nations have spent the week in Alaska sharing procedures, methods and tips with their American counterparts.

Held for the first time last winter, the training brings together partner nations with a stake in cold and mountainous regions, which this year includes Nepal, Chile, Germany, Italy, Slovenia, Great Britain, Canada and Finland.

They’re responsible for shaping the cold-region and mountaineering protocols in their respective countries or units.

“We all have our strengths and challenges,” Lt. Col. Francois Caron, representing the Canadian Army Doctrine and Training Centre in Ontario, told reporters during a conference call Wednesday that included representatives from all participating nations.

“From a Canadian perspective, we’re living up north, close to the arctic, so I think our cold-weather program is pretty much our bread and butter for five to six months of the year,” Caron said. “So we’re used to deploying in high-arctic and sub-arctic conditions. However, our mountain program is pretty much in its infancy. We’re developing it and capitalizing on the strengths of our partners who pretty much live in the mountains all the time.”

Finland finds itself in a similar place.

“I have to say we have little to do with military mountaineering because we are quite a flat country, but we have more things to share and say about arctic training,” said Capt. Juha Massinen, with the Finnish Jaeger Brigade, the country’s northernmost brigade.

Talking among one another — and getting out for some on-the-snow demonstrations — helped participants look at even the simplest things differently.

“There’s no one solution,” U.S. Army Alaska spokesman Lt. Col. Alan Brown said. For example, participants had shared a half-dozen versions of gloves and boots for overcoming cold weather and mountains. While U.S. troops use a two-layered glove, Finns employ a three-layer system that can be mixed and matched for certain conditions.

Col. Alberto Zamboni, deputy director of the NATO Mountain Warfare Centre of Excellence in Slovenia, said there are two enemies: the environment and the opponent.

“As a military, we do not want to fight two enemies at the same time,” he said. “So we have to find out all the solutions, all the details, all the tricks that allow us to use the environment as a friend, not as an enemy. That takes a lot of knowledge, a lot of experience. It’s a long, long process.”

Preparing troops for high-altitudes and cold weather, however, isn’t always about combat.

“In our case, the Chilean Armed Forces, we don’t have any threats in our mountain region, but we have to face on almost a yearly basis natural disasters in our mountains,” he said. “For us it’s a task for our troops to be prepared and to use our military capabilities in order to support our local authorities. When you realize you have a capable military force, you can use it for almost every situation.”

None of the participants spoke directly about possible military confrontations in the arctic region as the U.S., Canada, Russia and China find themselves competing for resources becoming available as the ice sheet disappears from global climate change.

But Caron did say global warming has already led Canada to shift some of its focus and exercises north and that the country is “taking it pretty seriously.”

“It’s opened up the artic to more economics and tourism and brought more challenges,” Caron said. With more mining and tourist forays into the far north, there are “more chances of plane crashes, people getting lost, getting in harm’s way, people smuggling,” he said.