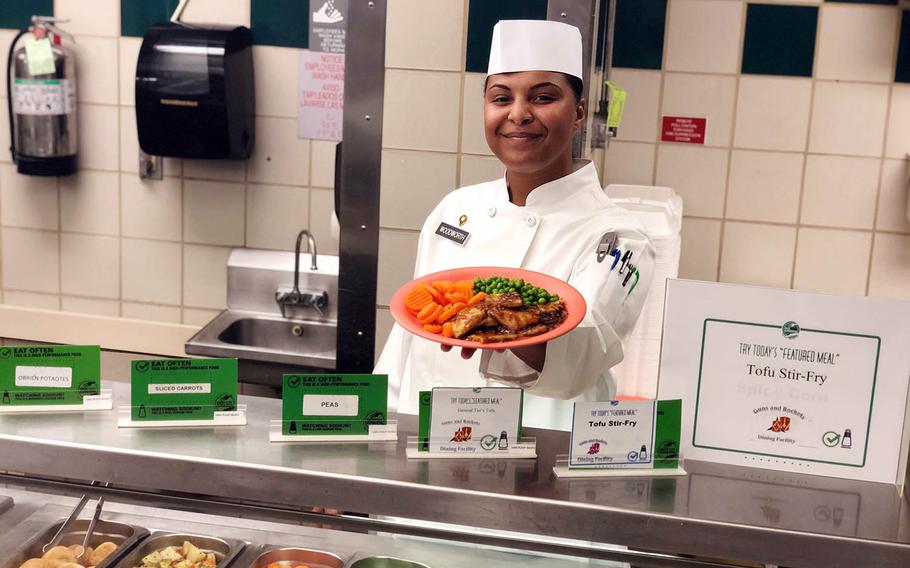 The Army says the Guns and Rockets Dining Facility at Fort Sill, Okla., is the first facility in the service to offer soldiers a 100 percent plant-based entree at every meal. (Courtesy of the U.S. Army)

The Army says the Guns and Rockets Dining Facility at Fort Sill, Okla., is the first facility in the service to offer soldiers a 100 percent plant-based entree at every meal. (Courtesy of the U.S. Army) 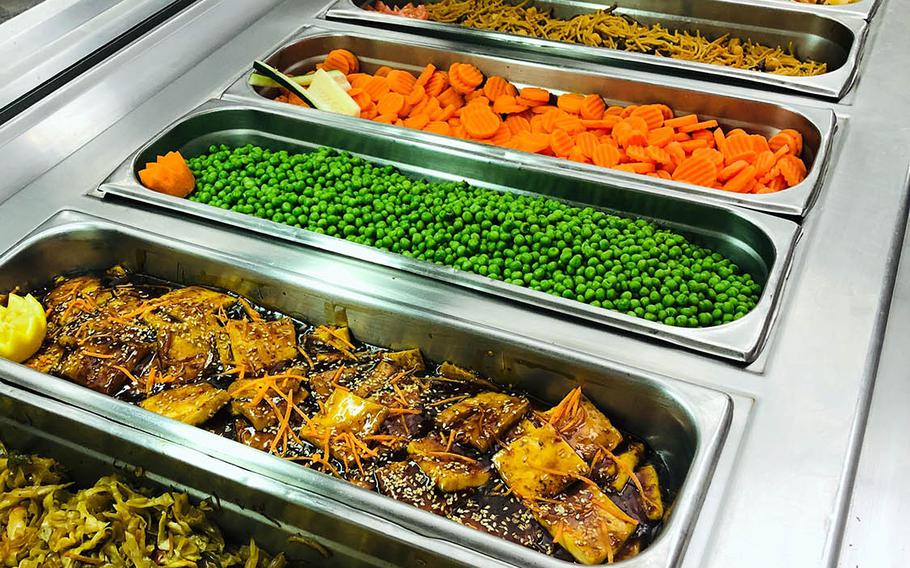 A soldier's request for more plant-based options led a dining facility at Fort Sill, Okla., to become the first in the Army to offer a 100 percent plant-based entree at every meal. (Courtesy of the U.S. Army)

The Guns and Rockets Dining Facility at Fort Sill, Okla., is setting a new standard for healthy food options by offering a 100 percent plant-based entrée during every meal.

It’s the only dining facility in the Army providing options for soldiers who don’t eat meat, eggs or dairy, Chief Warrant Officer 2 Jeremy Patterson, a food adviser for the 75th Artillery Brigade, told Stars and Stripes via telephone Friday.

Patterson, who has been eating a plant-based diet for years, pushed to update the menu after receiving a comment card in late 2017 asking for more options at the dining facility.

That request was based on religion, but Patterson, who takes pride in his knowledge of nutrition, wanted to go further and provide as many healthy options as possible to help the Army combat heart disease and obesity.

“We began testing items in February 2018 and were fully operational with labeling and an option at every meal by July of 2018,” he said. “Now, we sell out of the plant-based entrée at every meal.”

In addition to leaving the meat, dairy and eggs out of the main entrée at every meal, Patterson said the cooks stopped adding butter or pork to other vegetable offerings.

“We didn’t change the menu. We just substitute the meat within the dish,” he said. “Instead of chicken enchiladas on Taco Tuesday we use black beans, and instead of beef stir fry, we use tofu.”

The cooks also created a “cheese” sauce using potatoes, carrots and nutritional yeast, a combination that tastes like cheddar that the cooks then ladle over broccoli. Patterson said the serving line typically runs out of the sauce half-way through the lunch hour.

“People try it and like it. People are talking about,” he said. “We are not reinventing the wheel with recipes. We are just taking the recipe and substituting some ingredients.”

“It means I wouldn’t have to carry and additional seabag full of food with me on deployments,” he said. “It would be great if I could get something other than salad.”

It would not be hard to make a plant-based macaroni and cheese, or even swap out the beef burgers for plant-based Beyond Meat burgers, a brand that is popular in some U.S. restaurants, he said.

Stephens and his wife are both vegan and, like Patterson, are part of a growing demographic within the U.S. military, whose population mirrors the civilian world.

Plant-based diets have grown in popularity with the introduction of brands like Beyond Meat, Impossible Foods Inc. – maker of the Impossible Burger – and others in the past 10 years.

In a taste test of Beyond Meat burgers at Fort Sill in the fall, 121 soldiers responded that they would prefer it over a beef patty, said Patterson.

Social media groups like Vegan Army and MCAS Iwakuni Vegans and Vegetarians are gaining membership, and apparently changing the kinds of foods carried at commissaries.

“We have a lot of support from (Fort Sill commander Maj. Gen. Wilson Shoffner), who stood up on the news and said he was having his first plant-based Thanksgiving meal,” said Patterson, about the non-traditional options served by the facility for Thanksgiving last year. “He is showing soldiers that they don’t have to hide in a closet if they don’t want to eat meat.”

Patterson said he would like to see other Army dining facilities take the lessons learned from Fort Sill and apply them worldwide, although he added currently dining facilities are not required to serve a plant-based option unless they receive a request from a soldier.

“The whole military needs to get this right. We need to put [this food] out there and make it look awesome, and [soldiers] will ask for it again,” he said. “Pasta with nice grilled vegetables on it looks good and people are going to eat it.”