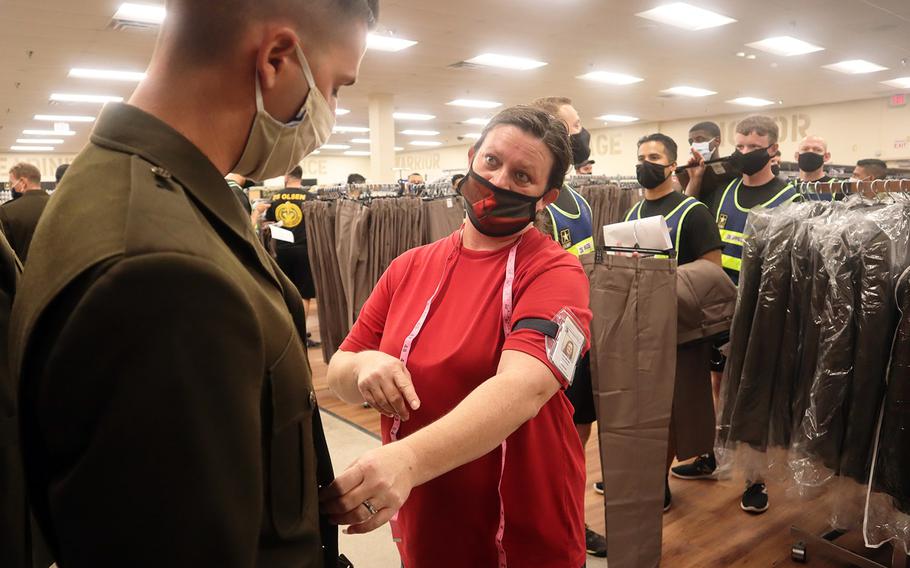 In a Sept. 3, 2020 photo, a drill sergeant gets fitted for an Army Green Service Uniform jacket by a Fort Sill Military Clothing Sales store shift manager. Some 200 new privates nearing the end of basic training at Fort Sill have recently been issued the new uniform, too. (Fort Sill Public Affairs)

The trainees assigned to the 1st Battalion, 79th Field Artillery basic training unit were issued the new uniforms on Oct. 14, ahead of their scheduled Nov. 13 graduation, according to the Army. The soldiers, with the battalion’s alpha company, were chosen to be first to receive the new uniforms simply because of that timing, said Command Sgt. Maj. Donald Harding, the senior enlisted leader for the 434th Field Artillery Brigade, responsible for basic training at Fort Sill.

Harding said it was “pretty neat” that some of his recruits would be the first in the Army to receive it. He said he looked forward to seeing the unit wear the new uniform when the graduate Basic Combat Training next month.

The new privates were each issued one Army Green Service Uniform, which included one jacket, pants, a dress shirt, brown oxford shoes, matching socks, their rank insignia, one long- and short-sleeved T-shirt, a tie, gloves and a garrison cap, which is a straight-sided, foldable hat.

Army officials said in August that the new Army greens should be available to nearly all soldiers to purchase on their installations by the spring. They will not become mandatory until 2027, when they will replace the blue Army Service Uniforms as the service’s every day, office-setting attire. The blue uniforms will remain authorized for more formal functions, Army officials have said.

Army and Air Force Exchange Service stores in the continental United States are expected to have the uniforms available for sale by December. AAFES locations in Alaska, Hawaii and on overseas posts are expected to begin selling them by February.

The uniforms will initially cost about $500, but that price is expected to drop as the Army ramps up production of the clothing, Daniel Koglin, a military clothing manager for the Army and Air Force Exchange Service, said in August.

Soldiers will also be able to purchase option items for the uniform, including the so-called “Ike” jacket, inspired by the cropped jacket made iconic by Gen. Dwight Eisenhower during World War II.

After Fort Sill, the Army is next expected to begin issuing the Army greens to trainees at Fort Leonard Wood in Missouri, Fort Benning in Georgia and Fort Jackson in South Carolina, Army officials said.