Fort Hood to name a gate after Spc. Vanessa Guillén 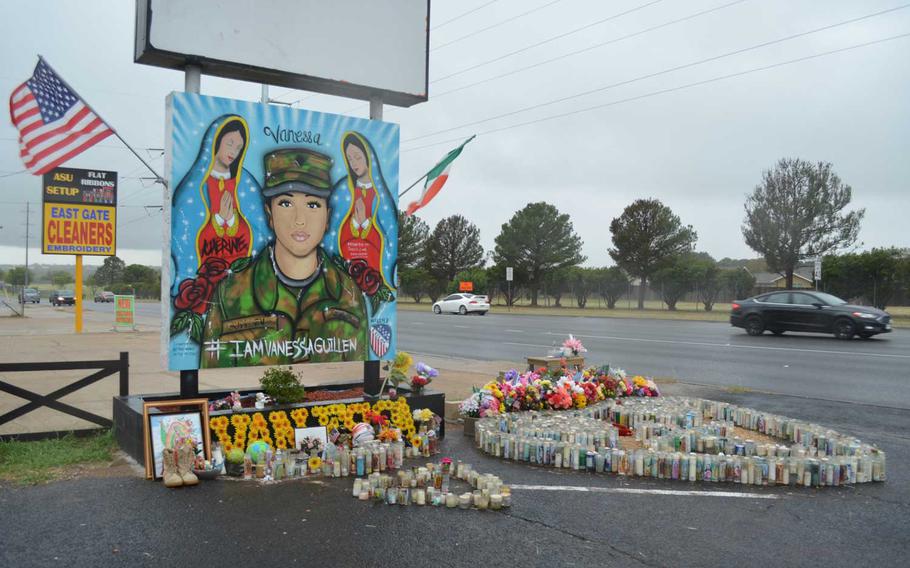 Buy Photo
Lt. Gen. Pat White, commander of Fort Hood, announced plans Tuesday to rename a gate at the base after Spc. Vanessa Guillen. The gate is located north of this public memorial placed in a business parking lot on Fort Hood Street and feeds into the area where her unit, the 3rd Cavalry Regiment, is located. Guillen was killed April 22 in an arms room at Fort Hood. (Rose L. Thayer/Stars and Stripes )

Buy Photo
Lt. Gen. Pat White, commander of Fort Hood, announced plans Tuesday to rename a gate at the base after Spc. Vanessa Guillen. The gate is located north of this public memorial placed in a business parking lot on Fort Hood Street and feeds into the area where her unit, the 3rd Cavalry Regiment, is located. Guillen was killed April 22 in an arms room at Fort Hood. (Rose L. Thayer/Stars and Stripes ) 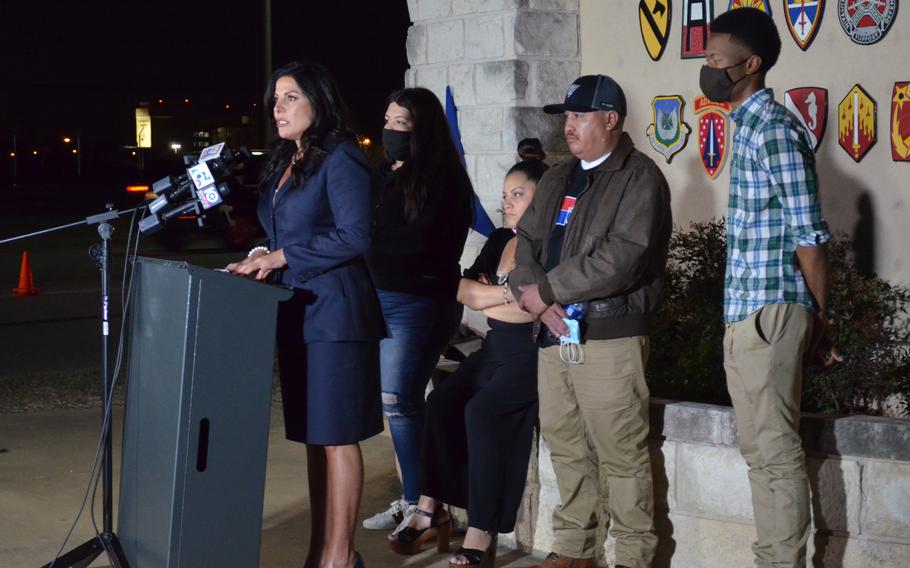 Buy Photo
Natalie Khawam, attorney for the family of Spc. Vanessa Guillen, speaks Tuesday evening during a news conference outside the main entrance to Fort Hood, Texas. Along with Guillen’s parents, her sister and an Army friend, Khawam met with base leadership, toured several sites and visited the location of the future Guillen Gate, named in honor of the slain soldier. (Rose L. Thayer/Stars and Stripes)

FORT HOOD, Texas — An announcement that Fort Hood will rename a gate near the east entrance of the Army base in honor of Spc. Vanessa Guillén shows commanders are taking ownership of the soldier’s death on the base earlier this year, said Natalie Khawam, an attorney for the Guillén family.

“Ownership is the first way to cure something,” Khawam said Tuesday evening during a news conference.

Along with Guillén’s parents, her sister and an Army friend, Khawam said the group met with base leadership, toured several sites and visited the location of the future Guillén Gate. Located on Fort Hood Street north of Rancier Avenue, the site will have an off-post parking area to allow public access of a small memorial for Guillén.

“They could have said we don’t want to be known for this bloodstain, but rather it’s the opposite. They put it visibly right in front of the gate of the base, so every day they have to remember Vanessa. They have to remember what happened here, so it never happens again,” Khawam said.

Guillén was a 20-year-old Houston native who was reported missing April 22. Her body was found more than two months later buried and concealed in concrete along the Leon River in Bell County.

Spc. Aaron Robinson, a fellow soldier in her unit, is believed to have killed her with a hammer in an arms room at Fort Hood and then buried her remains with the help of his civilian girlfriend, who is awaiting a federal trial for tampering with evidence. Robinson shot himself dead when confronted by police after Guillén’s body was found June 30.

Lt. Gen. Pat White said meeting with the family and getting their input for the gate was important as plans come to fruition during the next few months.

“We invited Spc. Vanessa Guillén’s family to visit Fort Hood as we take an important step together to memorialize Vanessa’s life and service to our nation,” White said in a prepared statement. “The gate we designated leads to the 3rd Cavalry Regiment area where Vanessa served. The gate is accessed by thousands of soldiers, civilians, and families every day.”

Gloria Guillén, the soldier’s mother addressed the media gathered outside the gate in Spanish. She said the gate is pretty, but she wants justice.

“I want a real change,” she said. “My daughter had to die for there to be real change. Because of her death everything is coming out now about everything that’s happened.”

During the search for Guillén, her family said the soldier faced sexual harassment on base, but she was too afraid to report it to her chain of command. After Robinson was identified as her killer, the family said he was her harasser. Base officials have said they did not find evidence to confirm this allegation.

Guillén’s story inspired thousands of veterans to come forward with their own stories of sexual assault and harassment on social media. In response, the Army initiated investigations into Guillén’s chain of command and the decisions made during the search for her, as well as into the command climate and culture of the base and its implementation of the Army’s sexual assault and harassment prevention program.

Those investigations are complete and the results are expected to be released in the coming weeks. In just one investigation, more than 180 people were interviewed, Khawam said.

Congress also has begun investigating the handling of Guillén’s death along with several of the other nearly 30 soldiers to die while assigned to Fort Hood this year.

“Vanessa’s life was a catalyst for us to implement action to improve trust, discipline, and teamwork across our formations,” White said. “In recent weeks, we began a ‘People First’ initiative that ensures soldiers, families, and civilians are always at the core of what we do.”

Khawam said she believes White is genuine in his efforts and she said she’s already heard many of the initiatives put into place beginning in September appear to be working.

“Everything the command and the generals have told me they’ve done, I have confirmed,” she said. “They are respecting the soldiers. When someone does have an issue, they have a number to call and they take the issue up. I’m not saying it’s perfect. Nothing’s perfect. It’s moving toward a better situation where they’re not just soldiers, they’re people, they’re human beings. That’s what our soldiers deserve.”