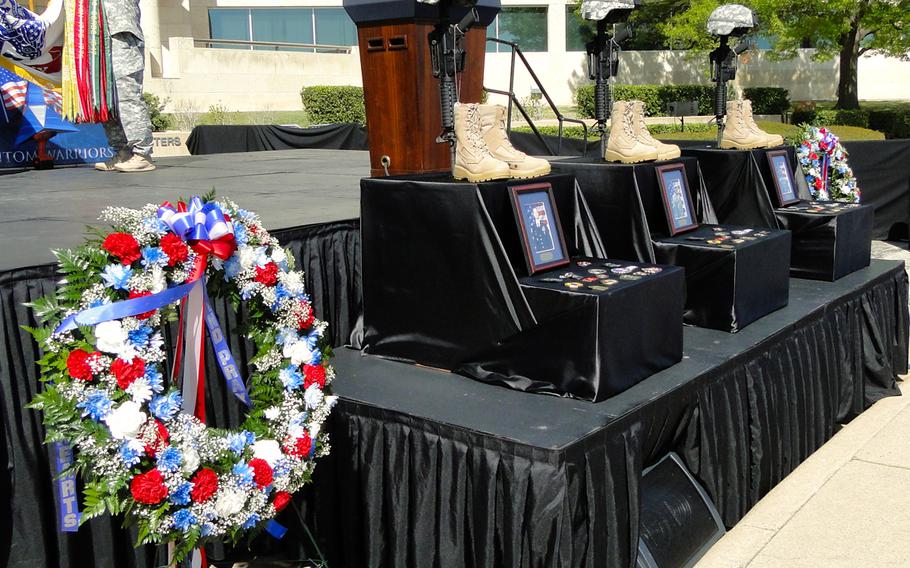 Three thousand people attended a memorial ceremony one week after three soldiers were killed in a mass shooting at Fort Hood on April 2, 2014. Sgt. 1st Class Daniel Ferguson, Staff Sgt. Carlos Lazaney-Rodriguez and Sgt. Timothy Owens died and 16 other soldiers were wounded in the shooting that ended when the gunman, Spc. Ivan Lopez, took his own life. (Jennifer Hlad/Stars and Stripes)

Three thousand people attended a memorial ceremony one week after three soldiers were killed in a mass shooting at Fort Hood on April 2, 2014. Sgt. 1st Class Daniel Ferguson, Staff Sgt. Carlos Lazaney-Rodriguez and Sgt. Timothy Owens died and 16 other soldiers were wounded in the shooting that ended when the gunman, Spc. Ivan Lopez, took his own life. (Jennifer Hlad/Stars and Stripes) 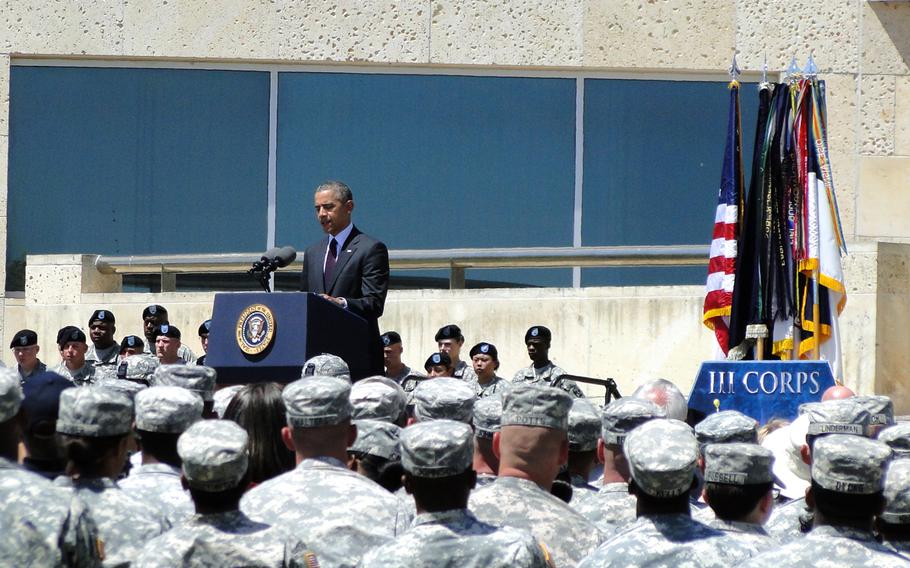 President Barack Obama speaks Wednesday at a memorial ceremony for the three soldiers who were killed in the April 2, 2014, shooting at Fort Hood, Texas. Obama said Americans must honor their memories by doing more to care for those with mental illness, civilian and military, and to ensure "we never stigmatize those who have the courage to seek help." (Jennifer Hlad/Stars and Stripes) 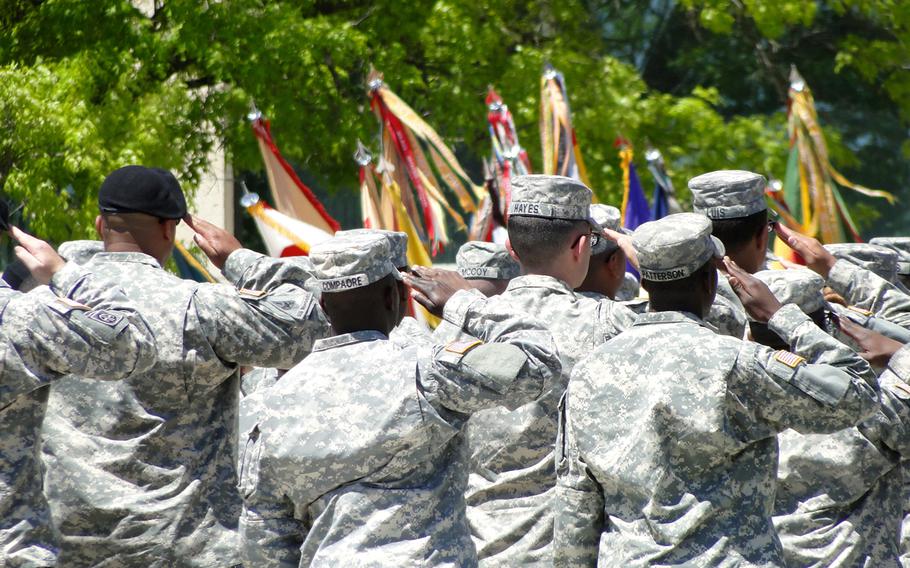 Soldiers salute during the National Anthem at the beginning of a memorial service Wednesday at Fort Hood, Texas, in honor of three soldiers killed in the shooting on post on April 2, 2014. (Jennifer Hlad/Stars and Stripes) 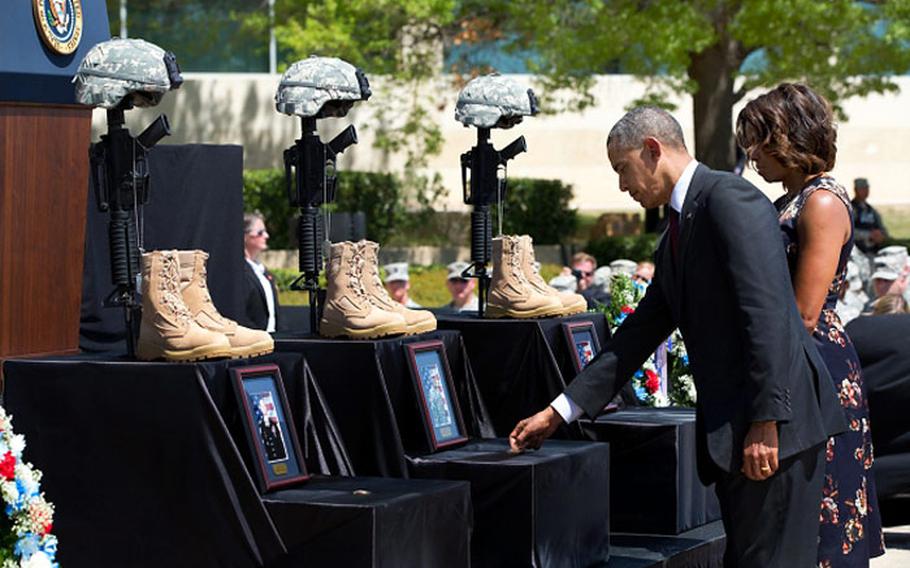 During a memorial service Wednesday, April 9, 2014, on Fort Hood, Texas, President Barack Obama, with first lady Michelle Obama, places a coin on each of the 3 boxes for the soldiers who died during the April 2 shooting rampage. (Pete Souza/White House)

Three thousand soldiers and families sat under a cloudless sky on the lawn in front of the III Corps headquarters building, blocked from the road by shipping containers stacked three high. On the stage, three fallen soldier memorials provided a reminder of Sgt. 1st Class Daniel Ferguson, Staff Sgt. Carlos Lazaney-Rodriguez and Sgt. Timothy Owens, who authorities say were fatally shot by Spc. Ivan Lopez before Lopez turned the gun on himself.

Ferguson, who was engaged to be married, held a door closed as Lopez tried to push his way into an office, Obama said, saving the lives of others even as he sacrificed his own.

Owens, who helped counsel other soldiers, was shot as he walked toward Lopez in an effort to calm him down, Obama said.

Lazaney-Rodriguez, who was just months away from retirement, was killed as he stood guard at a medical facility.

“The loss of these three soldiers is a terrible tragedy,” said Gen. Ray Odierno, chief of staff of the Army. “Our job as leaders is to prepare our soldiers for the chaos of war. Yet somehow, the loss of comrades in the heat of battles is a risk we understand, and, with time, can accept.”

That these losses happened on American soil makes them especially heartbreaking, Odierno said.

And soldiers can’t help but feel echoes of 2009, Odierno said, when Maj. Nidal Hasan opened fire in a medical clinic at this same post, killing 13 people and injuring 32 others.

Now, he said, “we must come together as an Army, as a community and as a nation, to learn from Wednesday’s tragic events and support and heal one another.”

The military must do more to identify the risk factors that lead to violence, he said, and to support the families and community that is affected by it.

“We do not know why one soldier is strengthened by tough times, and another cannot see a way forward,” Odierno said, “but we must and we will be there for them.”

Obama also called for a renewed commitment to keep troops safe, at home and abroad.

“In our open society, and at vast bases like this, we can never eliminate every risk. But as a nation, we can do more to help counsel those with mental health issues, to keep firearms out of the hands of those who are having such deep difficulties,” Obama said. “As a military, we must continue to do everything in our power to secure our facilities and spare others this pain.”

The Army is a dangerous profession, Army Secretary John McHugh said, but soldiers and families rightfully expect safety and security inside the gates.

“Yet, for a second time, horrible violence and unspeakable tragedy have breached these walls and torn through our very souls,” he said.

Ferguson, 39, of Mulberry, Fla., served nearly 21 years in the Army and deployed to Kuwait, Iraq and Afghanistan. The avid Cowboys fan played several sports in high school, and, his fiancée told the president, the Army was his life.

Lazaney-Rodriguez, 38, of Mayaguez, Puerto Rico, came from a close-knit family, following in his father’s footsteps by enlisting in the military, Odierno said. He was known as a meticulous soldier, “leading from the front, with a tough, but kind” nature, Odierno said.

Lazaney-Rodriguez served 19 years and deployed to Kuwait and Iraq. A friend said he was “the epitome of what you would want a leader to be in the Army,” Obama said.

Owens, 37, of Effingham, Ill., taught martial arts before he joined the military and loved working on cars, according to military leaders and friends. He served for 10 years, and deployed to Afghanistan, Iraq and Kuwait.

“He would help out anybody. That’s just how he was,” Caycee Hauck, a friend of Owens’, told reporters after the memorial.

The leaders also praised the bravery of other soldiers who risked their own safety to help others. The female military police officer who fired at Lopez before he shot himself advanced alone to confront him, Odierno said.

Maj. Patrick Miller was shot as he tried to move other soldiers behind a door for protection, Odierno said.

A chaplain, who has not been identified, also helped others escape by breaking windows, Odierno said.

“There are certain people who are able to step up in the most difficult times and do something heroic,” Odierno said.

Lopez’s name was not mentioned during the ceremony, though Obama and Odierno referenced the loss of four.

After the memorial, soldiers stood in line in the bright sun for more than an hour to pay their respects to the fallen, wiping away tears and hugging each other for support as they walked away.

And the effort to honor the fallen and care for the wounded does not end now, said Lt. Gen. Mark Milley, commander of Fort Hood and III Corps.

“We stand with you, we grieve with you, and we will be here for you. Not just today, not just tomorrow, but forever,” he said.