Fort Bragg said its Twitter account was hacked with lewd comments, but the next day the Army changed its story Twitter moved quickly this week to limit the spread of a New York Post story promising new twists in the saga of Joe Biden's relationship with Ukraine. (AP)

Twitter moved quickly this week to limit the spread of a New York Post story promising new twists in the saga of Joe Biden's relationship with Ukraine. (AP) 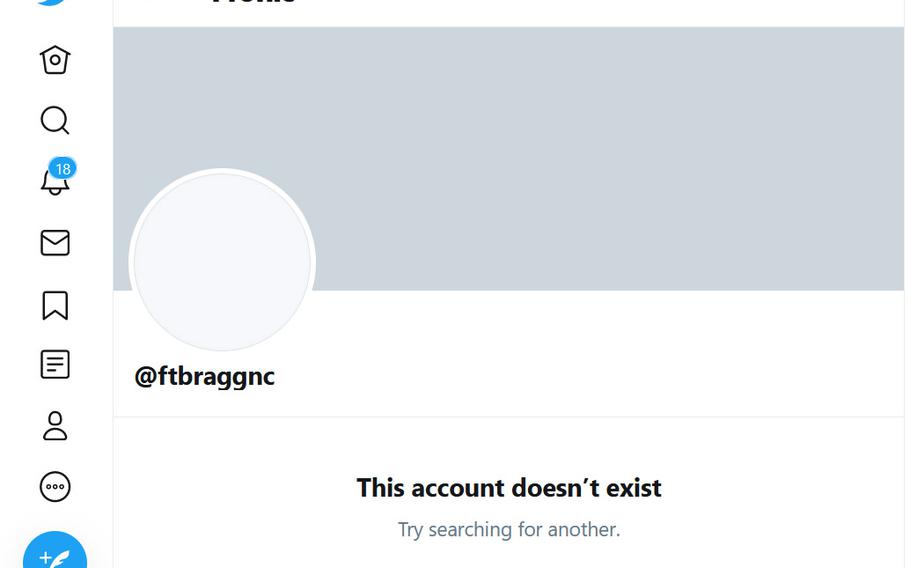 WASHINGTON – On Wednesday, Fort Bragg said its Twitter account was hacked. By Thursday, the Army changed its story on how lewd comments to a pornographic model were posted.

A spokesman at Fort Bragg, N.C., said Thursday that someone with official access to the Army post’s account was the culprit in a series of explicit tweets posted Wednesday after offering the explanation later Wednesday that the account was hacked.

“This morning, at the initiation of an investigation into yesterday’s incident regarding inappropriate tweets on the Fort Bragg Twitter account, an administrator for the account identified himself as the source of the tweets,” Col. Joseph Buccino, a spokesman for the XVIII Airborne Corps, which is based at Fort Bragg, said in a statement.

An Army official who spoke on the condition of anonymity said Thursday afternoon that the person is a public affairs civilian employee.

The civilian worker had posted several lewd comments to a woman who displays nude photos on OnlyFans, a subscription-based pornographic website. In one case, the @FtBraggNC account commented on the physical attributes of the woman. In another tweet, sexual acts were discussed.

The comments were deleted after about 30 minutes, and a statement from officials was then tweeted from the Fort Bragg account that stated it had been compromised. Fort Bragg’s account has been removed from Twitter.

It was unclear Thursday what consequences the civilian employee will face.

In September, the Army suspended 2nd Lt. Nathan Freihofer from his duties at Fort Stewart, Ga., and launched an investigation into a post he made on TikTok. In the short video, Freihofer said he would never become a “verified” user because of the content that he shares, before telling his so-called joke about the Holocaust and Jewish people.

Earlier this month, Marine Corps Pfc. Jarrett Morford posted a TikTok video of him using racial slurs and issuing threats of shooting Chinese people when he deploys with the fleet.

Fort Bragg has roughly 57,000 military personnel and is the home of the 82nd Airborne Division, the XVIII Airborne Corps, and 1st Special Forces Command.