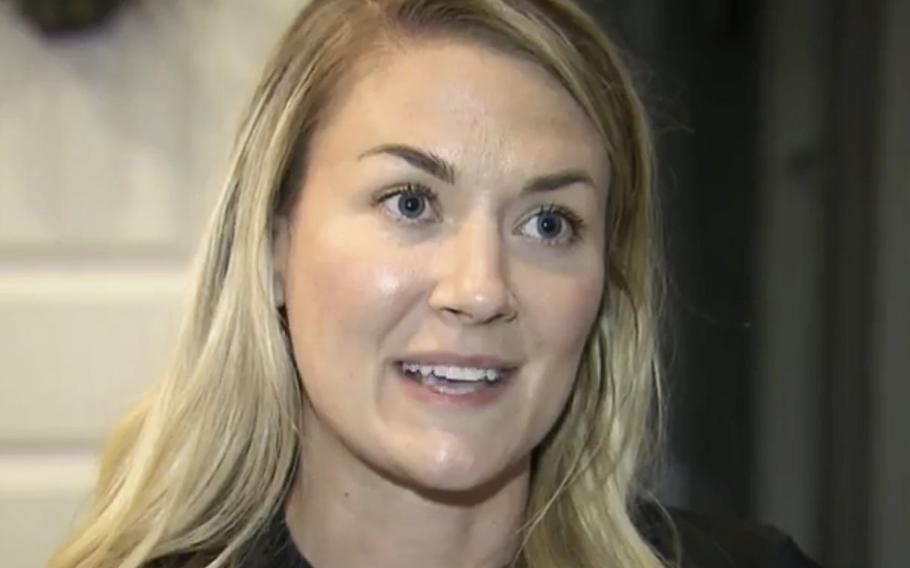 In this image taken from video provided by WRAL-TV, Capt. Emily Rainey speaks during an interview with WRAL-TV, in Southern Pines, N.C., in May 2020. The Army is investigating Rainey, a psychological operations officer, who led a group of people from North Carolina to the rally in Washington that led to the deadly riot in the U.S. Capitol by supporters of President Donald Trump. (WRAL-TV via AP)

An Army captain who faces scrutiny from military leaders for her attendance Wednesday at President Donald Trump’s rally just before a deadly riot at the U.S. Capitol was already in the process of leaving the service, an Army spokesman said Monday.

“She had applied to leave the Army several months ago,” Strickland said.

Rainey, 30, told The Associated Press on Sunday that she had led a group from North Carolina to attend the rally to "stand against election fraud" after Trump encouraged his followers to visit the national capital to protest as Congress voted to certify the election victory of President-elect Joe Biden. She said she had not participated in the subsequent violence at the Capitol and she did not enter the building. She also insisted she had not violated Army regulations.

"I was a private citizen and doing everything right and within my rights," Rainey told the AP.

Strickland said the Army had not launched a formal investigation into her participation in the rally, but her commanders were conducting a “fact-finding mission” to determine whether rules had been violated.

Army officials said Monday that the service was working to determine whether any of its personnel had participated in the violent siege, which briefly delayed Congress’ certification of Biden’s win. Strickland said 1st Special Forces Command had not seen any evidence to indicate any of its soldiers were involved in the violent clash at the Capitol.

In May, Rainey was charged with injury to personal property by police in Southern Pines, N.C., after she posted video to social media showing her pulling down caution tape meant to keep children off a playground that was closed under state coronavirus restrictions.

After that incident, the Army took unspecified adverse administrative actions against Rainey, Strickland said. He declined to say what punishment Rainey faced.

The clash at the Capitol resulted in five deaths, including Capitol Police Officer Brian Sicknick. A veteran of the New Jersey Air National Guard, Sicknick died one day after the riots of injuries that he sustained during the siege.

An Air Force veteran, Ashli Babbitt, was also killed in the incident, when she was shot by Capitol police. Babbitt was among those who attended Trump’s rally before storming the Capitol Building.

At least 90 people have been arrested for their alleged involvement in the riots, according to Justice Department officials. They face charges ranging from violating curfew to felonies, including assaulting police, possessing illegal weapons and making death threats.

Rainey has not been charged with any crime related to the incident last week.

Others with military ties have been arrested, including Larry Rendall Brock Jr., a retired Air Force lieutenant colonel and former A-10 pilot, who was photographed in the Senate chamber wearing tactical gear and holding zip-tie handcuffs. Brock was arrested Sunday in Texas and charged with one count of knowingly entering a restricted building and one count of violent entry and disorderly conduct, federal prosecutors said.

Lawmakers on Monday urged the Pentagon to prosecute any service members who participated in the attack on the Capitol.

Sen. Tammy Duckworth, D-Ill., in a letter sent Monday to acting Defense Secretary Christopher Miller said she was aware of reports active-duty troops, reservists and military retirees were among those who participated in the siege.

“If accurate, it would be a disgraceful insult to the vast majority of service members who honorably serve our nation in accordance with the core values of their respective services,” Duckworth, an Iraq war veteran, wrote in the letter.

She urged Miller to instruct the military’s criminal investigations agencies to work with federal agents probing the incident.

“Upholding good order and discipline demands that the U.S. armed forces root out extremists that infiltrate the military and threaten our national security,” she wrote.

In a separate letter to Miller, Reps. Ruben Gallego, D-Ariz., and Sara Jacobs, D-Calif., said current and former troops “may have been among these insurrectionists.” Like Duckworth, Gallego is an Iraq War veteran.

“We need to throw the book at them as the terrorists they are,” Gallego wrote in a tweet Sunday with the letter to Miller attached.