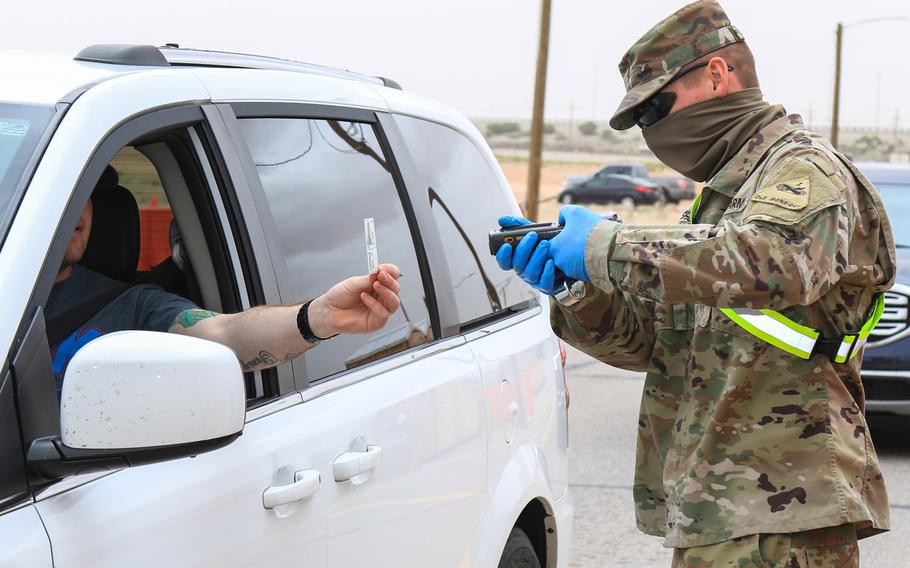 Pfc. Ryan Chisholm checks an ID at Fort Bliss, Texas, March 27, 2020. Service members and others with Common Access Cards that expired during the coronavirus pandemic or are about to expire must renew them by September 30, Defense Department guidance issued this month said. (Kris Bonet/U.S. Army)

AUSTIN, Texas — The commander of Fort Bliss declared a public health emergency Friday as the number of coronavirus cases at the base and the surrounding El Paso community continued to climb and strain resources in the region.

The emergency declaration follows a series of safety measures imposed last week by Fort Bliss commander Maj. Gen. Sean Bernabe to control the spread of the virus. Those measures included a 10 p.m. curfew, limiting access to the base and barring service members from dining inside off-base restaurants.

“[The emergency declaration] is prudent given the significant increase in [coronavirus] cases in the El Paso area,” Fort Bliss officials said Friday in a prepared statement.

Hours earlier, three Air Force medical teams totaling about 60 airmen were deployed to El Paso to support three civilian hospitals in the city as virus cases surge. The city reported 1,049 people hospitalized because of coronavirus Friday. Of those, 311 were in intensive care.

Bernabe, who is also commander of the base’s largest unit the 1st Armored Division, made the declaration primarily to aid the base’s William Beaumont Army Medical Center, which has accepted dozens of patients eligible for care at the facility either through the Defense Department and Department of Veterans Affairs, according to base and hospital officials. The emergency declaration increases the commander’s authority to restrict movement on the base and outlines policies to improve support and resources for the hospital.

Bernabe’s declaration is in line with others issued by Texas state officials, according to base officials.

Last week, Bernabe said Fort Bliss had an increase in coronavirus cases without revealing any other details. But his emergency declaration, which remains in effect for 30 days, has not impacted scheduled training events, said Lt. Col. Allie Payne, spokeswoman for the division. The base is expected to provide an update Monday.

The three 20-person medical teams departed for west Texas on Friday from military bases in Texas, Florida, Mississippi and Maryland, according to U.S. Army North’s Joint Force Land Component Command. The command oversees the Defense Department’s coordination with the Federal Emergency Management Agency to control the coronavirus pandemic. The teams are expected to arrive at the hospitals during the weekend.

“We remain steadfast in our commitment to assist those in need as part of the whole-of-nation response to the [coronavirus] pandemic and in support of FEMA,” said Lt. Gen. Laura J. Richardson, Army North commander. “Alongside our local, state and federal partners, we will work to mitigate this virus and care for [residents of El Paso].”

Dozens of eligible patients, including those with coronavirus, have transferred to William Beaumont Army Medical Center since last week to reduce the strain on civilian hospitals in El Paso, according to a news release from Army medical center and the El Paso VA Healthcare System. About 40,000 veterans are eligible for care at the base hospital, according to the El Paso VA.

“In this pandemic, we are taking a significant burden from the community by bringing the VA patients in as well as our own beneficiaries,” said Col. Michael S. Oshiki, commander of William Beaumont Army Medical Center. “The partnership continues now that the VA is allowing us to use their space as we expand our operations and take care of patients in their space as well as ours.”

The El Paso VA and the Fort Bliss hospital have connected with their counterparts in San Antonio to transfer patients as needed. The Audie L. Murphy Memorial VA Hospital and Brooke Army Medical Center have agreed on plans to receive patients transported across the more than 550 miles to San Antonia on military aircraft on Wednesdays and Saturdays.

"Our ongoing partnership with the federal government is crucial to our efforts in reducing [coronavirus] hospitalizations in El Paso," Texas Gov. Greg Abbott said in a statement.

The Air Force medical teams sent to El Paso include health care workers and several administrative personnel, according to Army North. Troops will support the University Medical Center of El Paso, the Hospitals of Providence Transmountain Campus and the Las Palmas Del Sol Medical Center, all located in El Paso.

Troops from the Michigan National Guard’s 46th Military Police Command deployed to El Paso on Wednesday to set up for the arrival of the Air Force medical support, according to Army North. The Guard troops will provide command and control of the medical teams.

Deploying military medical staff to civilian hospitals to fight the coronavirus was first used in April after attempts to set up military field hospitals were less effective. At its peak, Army North had more than 10,000 active-duty troops and reservists deployed to 47 hospitals in 10 states.

In September, the remaining 740 of those troops, located in Texas and California, returned to their home duty stations.

El Paso was not included in the initial deployment.