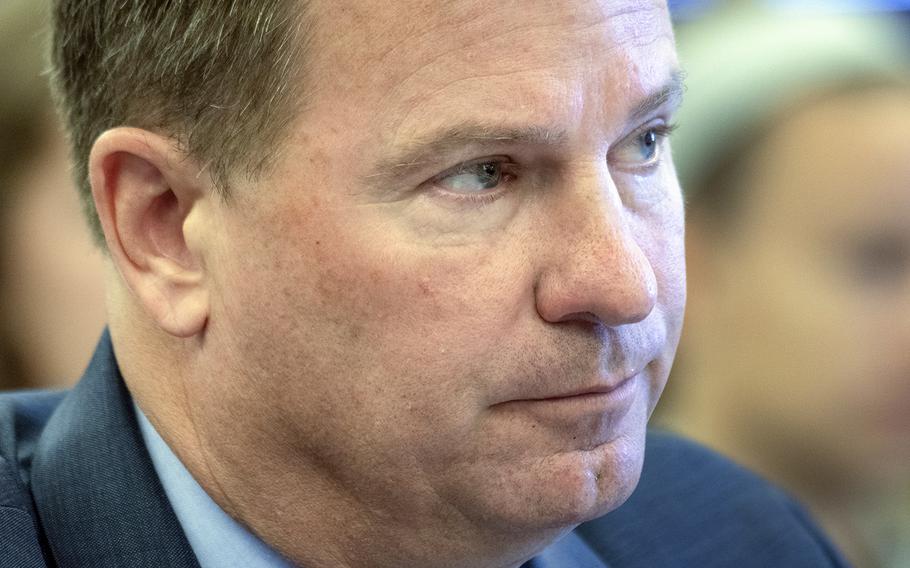 James Byrne, then the VA's general counsel, at a Senate Veterans' Affairs Committee hearing in May, 2019. (Joe Gromelski/Stars and Stripes)

WASHINGTON — The former deputy secretary of the Department of Veterans Affairs said Thursday that he was fired earlier this year because he would not go along with a conspiracy to smear a woman who claimed she was sexually assaulted, and because he was seen as a political rival to VA Secretary Robert Wilkie.

Jim Byrne, the VA’s former second-in-command, was ousted from the agency in February. At the time, there was no word from the department on the circumstances for his dismissal, other than Wilkie had lost confidence in him.

But Byrne said he had a good relationship with Wilkie until Byrne would not participate in an attempt by Wilkie to discredit the character of a House aide who said she was sexually assaulted in 2019 at a VA hospital in Washington.

“I’ve gotten crossways with Wilkie over the [sexual assault] matter by refusing to trash this woman,” he said.

However, Pamela Powers, the VA’s chief of staff, said Friday that Byrne was “fired for being incompetent” and she said he was poor at managing the health records modernization effort.

“He was driving a wedge between our vendor and our staff. The program was not going in the right direction,” she said.

Powers said Byrne was on thin ice with Wilkie, but that came to a boiling point over his communication with news reporters.

“The straw that broke the camel’s back was that Jim Byrne was attempting to get media to FOIA emails between two female VA executives. ... The fact he was trying to discredit female leaders was unacceptable,” Powers said.

In September 2019, Andrea Goldstein, an adviser on female veterans’ issues for the House Committee on Veterans’ Affairs and serves as a Navy Reserve officer, said she was assaulted in the VA hospital’s cafeteria. A man slammed his body against hers and made sexually suggestive comments.

No charges were filed, partly because security cameras did not capture the attack, according to a January report from VA’s inspector general. However, the report did not dismiss Goldstein’s claim and it spurred a public confrontation between the VA and House Democrats.

In response to the assault claim and results from the report, Wilkie wrote a letter to Rep. Mark Takano, D-Calif., chairman of the VA committee, arguing that Takano and his staff made “unsubstantiated” comments, suggesting Goldstein’s attack was fabricated.

“It’s a term that the IG uses, it’s a term widely used in the [Defense Department]. In this case, the case was not substantiated,” Powers said. “[Wilkie] said he wished he didn’t use that word because everybody took it out of context. ... The case was unsubstantiated, bottom line.”

Byrne said Thursday that Wilkie believed the sexual assault was a conspiracy by the Democrats to attack the VA.

“He was wrapped around the axle that this was Takano and the Dems, the evil Dems ... and [Speaker of the House Nancy] Pelosi, that they were working with this young lady to concoct something to hurt him,” he said.

Byrne characterized Wilkie as becoming obsessed, saying the VA secretary would “go off the rails” and he wanted to paint Goldstein as a serial filer of complaints.

Byrne also said Wilkie met with Rep. Dan Crenshaw, R-Texas, to confirm details that VA was trying to dish out about the House aide.

Crenshaw, who deployed with Navy SEAL Team 2, served alongside Goldstein in Afghanistan, and he told Wilkie that the staffer made six complaints related to sexual harassment, Byrne said. Crenshaw’s office did not return a request for comment.

“I remember [Wilkie] taking me aside … He’s like, ‘This information needs to get out publicly to people. The right people need to know this.’ And all I remember is going, ‘Oh my God ... I’m not doing this.’”

Byrne said Wilkie approached him multiple times about getting information about Goldstein out to the public, which confused him because he rarely dealt with news reporters.

“It caught me off guard,” he said. “The fact that he thought I would do that stuff. I had just gotten confirmed like a week before. So I think he thought he had leverage on me or something like that.”

Byrne wasn’t the only one charged with getting the story out. He said Wilkie enlisted multiple members of his senior staff to attack Goldstein through the media.

The VA inspector general has been investigating allegations that Wilkie conspired for months to undermine Goldstein’s credibility. It was unclear Friday when the results of the investigation will be released.

“No veteran deserves the treatment that is described by the former deputy secretary,” said Rep. Phil Roe of Tennessee, the ranking Republican on the House VA committee, said in a statement. “These allegations don’t resemble the Secretary Wilkie that I know and I hope that the IG will be able to shed light on their validity as soon as possible so that we can move forward.”

Powers said Wilkie never sought to dig up dirt on Goldstein or act maliciously in any way and the results of the IG report will show that.

“I would have never worked with [Wilkie] if he’d done that,” Powers said. “This is a bunch of BS from a person that was fired and that vowed to get back at the person that fired him.”

It wasn’t just the refusal to take part in the fight against Goldstein that got Byrne fired, he said. White House officials told him to be ready to take charge, as Trump was gearing up to fire Wilkie about a year ago, Byrne said. But Trump’s staff talked him out of it, he said.

Brian Morgenstern, the White House deputy press secretary, denied that allegation Friday, and he said Trump has never considered firing Wilkie and the secretary remains in the president’s good graces.

“We had the morning staff meeting and at the end of the staff meeting, the head of [Human Resources] walks in and [Wilkie] goes, ‘I’ve lost confidence in you. And I need to set your resignation effective immediately’,” Byrne said.

Byrne is a Senate-confirmed deputy secretary. He said he told Wilkie that he lacked the authority to dismiss him. He said Wilkie told him that Mick Mulvaney, the White House chief of staff at the time, gave the approval.