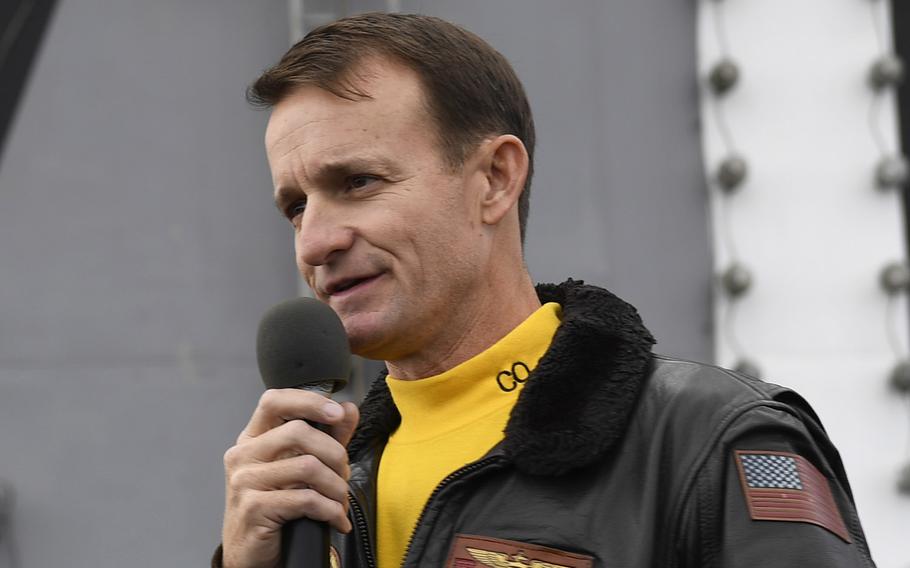 In a Nov. 14, 2019 photo, Capt. Brett Crozier, then commanding officer of the aircraft carrier USS Theodore Roosevelt, addresses the crew during an all-hands call on the ship's flight deck. (Nicholas Huynh/U.S. Navy)

WASHINGTON — Capt. Brett Crozier, the former commander of the USS Theodore Roosevelt, has left Guam where he had been fighting the coronavirus and has been reassigned to a position in California, according to a Navy official.

The captain was relieved of command of the aircraft carrier on April 2, several days after a letter that he wrote requesting the crew be evacuated from the ship due to an outbreak of the virus was leaked to the media.

Crozier warned in his letter that the outbreak could kill some sailors, and “if we do not act now, we are failing to properly take care of our most trusted asset — our sailors.”

Crozier is now special assistant to Capt. Max McCoy, the chief of staff for the commander of Naval Air Forces, U.S. Pacific Fleet, according to Flanders.

The Navy initiated an investigation into the outbreak and Crozier’s letter following his dismissal. On April 24, the Navy’s top leaders briefed Defense Secretary Mark Esper on the investigation and news reports said they recommended Crozier be reinstated as commander of the Roosevelt. However, no action was taken after Esper requested more time to review the Navy’s written report.

Since that briefing, the entire 4,800-member crew of the Roosevelt has been tested for the coronavirus, the Navy has reported. The Navy’s last update Thursday stated there were 1,102 active cases of the virus among the ship’s crew, 53 sailors had recovered, and three were being treated at U.S. Naval Hospital Guam for symptoms. One Roosevelt sailor died April 13 from the virus.

Sailors have been returning to the Roosevelt after weeks of quarantine in Guam. Sailors who have tested negative repeatedly for the virus are allowed back on the ship, which has been cleaned, according to the Navy.

The nuclear-powered aircraft carrier arrived in Guam on March 27 as the virus spread among the ship’s crew. The new commander, Capt. Carlos Sardiello, said during a CBS News interview Monday that the ship will not wait for all its sailors to leave quarantine before it returns to sea. More than half of the crew has returned to the ship, according to the CBS report.

“We’ve taken 45 days from that business (of patrolling) and it’s a dangerous business, so we have a lot of training to complete,” he said.

Acting Navy Secretary James McPherson on Wednesday ordered a deeper review into the virus outbreak aboard the Roosevelt and the Navy’s response, following an initial investigation that left him with “unanswered questions.”

The investigation is expected to be submitted to Adm. Mike Gilday, the chief of naval operations, by May 27 unless an extension is granted, Cmdr. Nate Christensen, a spokesman for Gilday, said Thursday in a statement.