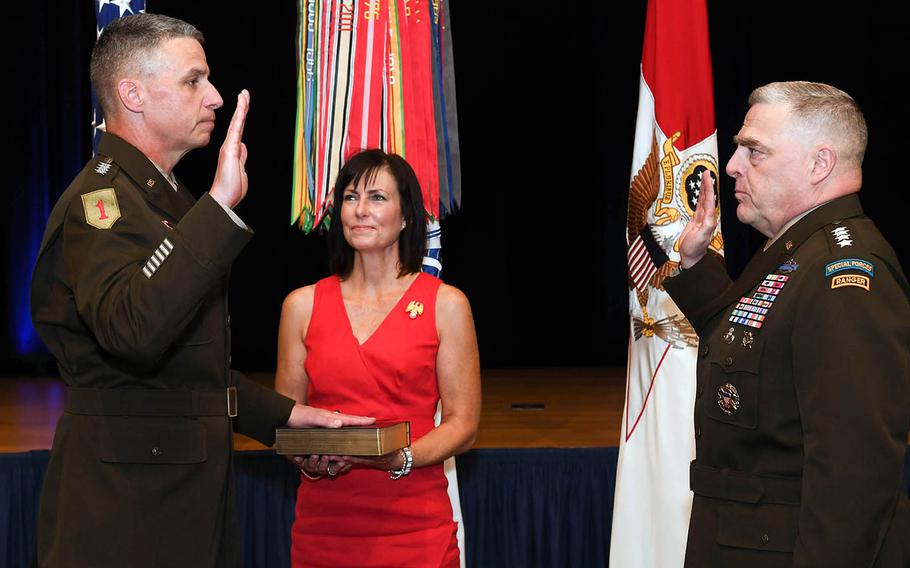 Gen. Joseph Martin, left, is sworn in as Army vice chief of staff by Army Chief of Staff Gen. Mark Milley during a ceremony at the Pentagon, Arlington, Va., as his wife, Leann Martin, watches on July 26, 2019. (Keisha Brown/U.S. Army)

Gen. Joseph Martin has been sworn in as the Army’s 37th vice chief of staff during a ceremony at the Pentagon.

Martin, who was serving as the director of the Army Staff, was promoted to general on the same day, Friday, by Army Chief of Staff Gen. Mark Milley, the Army said in a statement.

Martin replaced Gen. James McConville, who is slated to replace Milley, who was confirmed by the Senate on July 25 as the next chairman of the Joint Chiefs of Staff, the Army said. Milley is expected to relieve current chairman Gen. Joseph Dunford in September.

Martin, a native of Dearborn, Mich., formerly commanded the 1st Infantry Division. He is a 1986 West Point graduate who holds a master’s degree in education from the University of Louisville. He’s also a graduate of the U.S. Army Command and General Staff College and the U.S. Army War College.