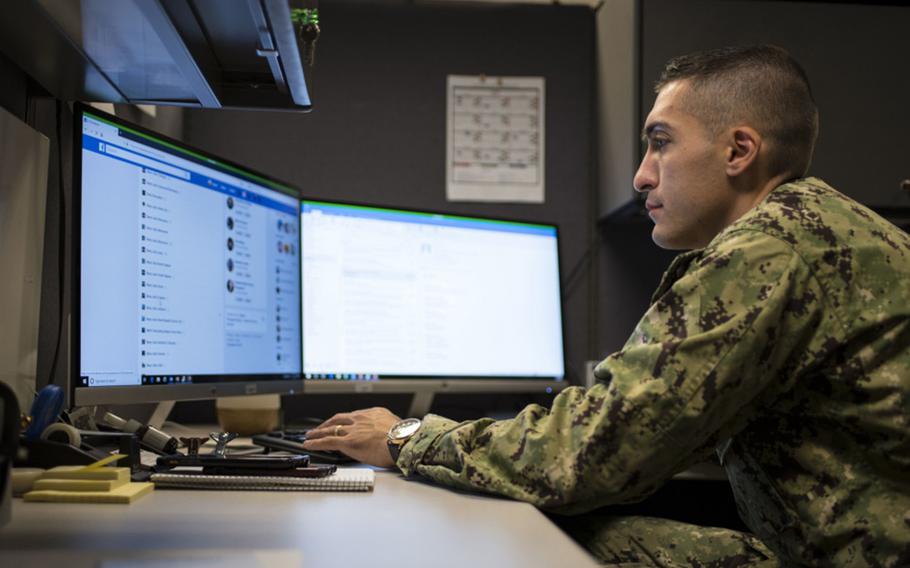 WASHINGTON — Some Senate Democrats are pressing the departments of Defense and Veterans Affairs on what efforts the agencies are taking to protect veterans and service members from online foreign disinformation, fraud efforts and spy recruitment.

In September, Vietnam Veterans of America, a nonprofit veterans advocacy group, released a report that found “persistent, pervasive, and coordinated online targeting of American service members, veterans, and their families by foreign entities who seek to disrupt American democracy.” The report also found evidence of interference in the 2020 election cycle targeting veterans on most major social media platforms, similar to efforts by Russia during the 2016 U.S. elections.

“We write to inquire about the current efforts by the Department of Defense to educate service members and DoD civilian employees about online disinformation campaigns and other malign influence operations by Russian, Chinese, and other foreign entities and individuals,” the senators wrote. “While DoD is currently authorized to provide training to all service members and DoD civilian employees about measures by the Russian government and its proxies to influence and recruit service members as part of its malign influence campaign, the department is not formally required to provide this training.”

The senators, who include presidential candidates Sens. Elizabeth Warren, D-Mass., Bernie Sanders, I-Vt., Kamala Harris, D-Calif., and Amy Klobuchar, D-Minn., are asking the Defense Department and VA to respond by Dec. 6 on how the agencies plan to train service members and educate veterans on how to identify malicious foreign agents online and how to avoid falling victim to propaganda and fraud.

The letters were sent as public hearings start Wednesday in the impeachment inquiry against President Donald Trump. The impeachment inquiry centers around Trump’s willingness to request the Ukrainian government investigate former Vice President Joe Biden, a Democratic candidate for president in 2020. Trump has routinely disputed Russia interfered in the 2016 election and Democrats have contended he is downplaying or ignoring threats against U.S. elections.

House lawmakers were also planning to discuss a similar issue in a Wednesday afternoon hearing, which is slated to explore misuse of veterans’ identification for the dissemination of fake news, political propaganda, romance scams and commercial fraud.

The VVA’s report found known Russian propaganda and similar politically divisive content that targets service members and veterans is being spread by agents from at least 30 foreign countries, with concentrations in Eastern Europe and Vietnam.

The bogus information targeting troops and veterans is largely geared towards impacting the 2020 election in President Donald Trump’s favor, according to the VVA report. Foreign agents will often create seemingly pro-veteran social media pages and sprinkle in propaganda and junk information to misinform veterans purposely about politics.

A Facebook page “Vets for Trump” was operated by agents from the United Kingdom and Macedonia from April to August and amassed more than 131,000 followers, according to the VVA’s report. The report also noted agents running pages are often from multiple countries and in some cases with no geographic commonalities and language barriers.

“This page posts explicitly pro-Trump and anti-Democratic-candidate messages and memes. The page also posts pro-Russia/Putin, pro-Assange/WikiLeaks, as well as anti-Robert-Mueller and anti-FBI content,” according to the senator’s letter.

In an effort to appear more legitimate, malicious foreign agents recruit Americans to moderate social media pages intended to distribute propaganda, according to the VVA report. To be more discreet, not all posts are memes intended to misinform or lampoon Democrats. The pages talk about veterans benefits and give out legitimate information in between posting memes of Democrats or bolstering the Trump administration.

One Facebook page, “Veterans of Vietnam,” with nearly 160,000 followers at one time, has had agents in Russia, Ukraine and Italy. The page has been bolstered by at least three dedicated Russian-generated, Vietnam-veteran-focused websites that were created to build the Facebook page’s credibility by sharing information about the Vietnam War and veterans benefits, according to the VVA.

Foreign page administrators are also posing as legitimate veteran organizations to extort veterans and service members. In one case, the VVA found foreign Snapchat and Instagram accounts using VVA’s name and logo to lure its supporters into participating in fraudulent fundraising.

While Russia is largely focused on election interference and disinformation, the senators wrote they are concerned about the VVA’s findings that the Chinese are targeting troops and intelligence officials to recruit as spies.

”Fake accounts are also being utilized by hostile Chinese intelligence services to connect with high-ranking and influential members of the intelligence and defense communities centered in and around Washington, D.C.,” according to the VVA report. “Chinese officials are seeking to exploit financially vulnerable members of these communities and leverage debts to recruit spies.”