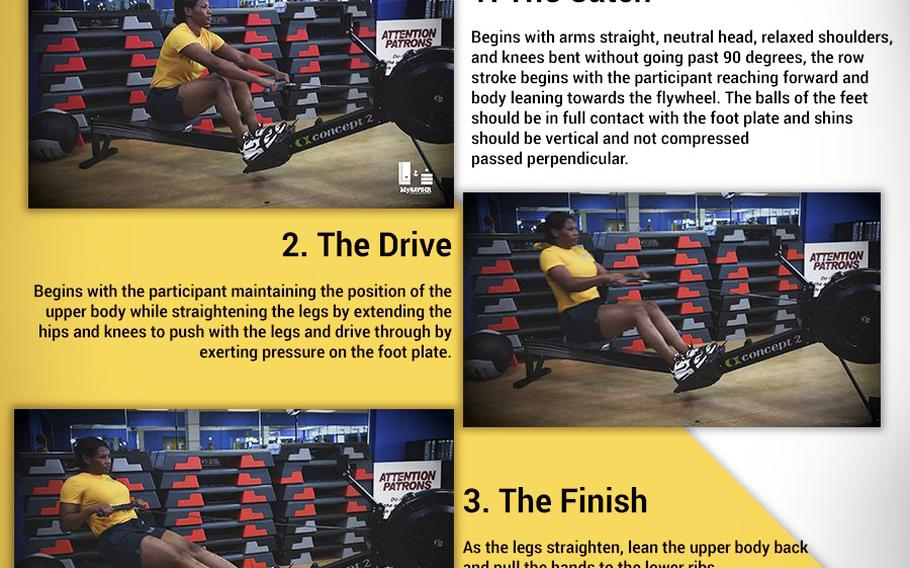 An infographic showing the correct form that sailors should maintain during the rowing event of the Navy's updated fitness test. (U.S. Navy)

An infographic showing the correct form that sailors should maintain during the rowing event of the Navy's updated fitness test. (U.S. Navy) 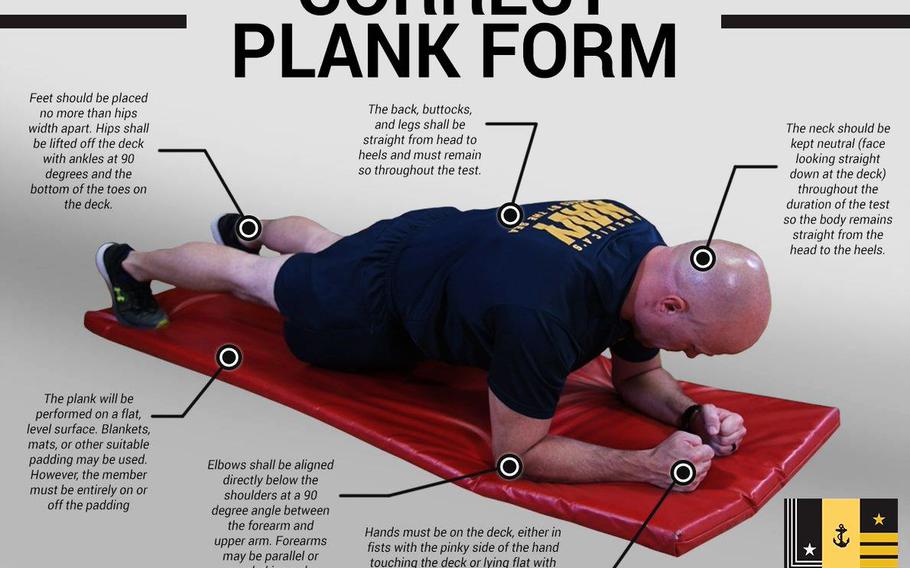 An infographic showing the correct form for sailors in the forearm plank event of the Navy's updated fitness test. (U.S. Navy) 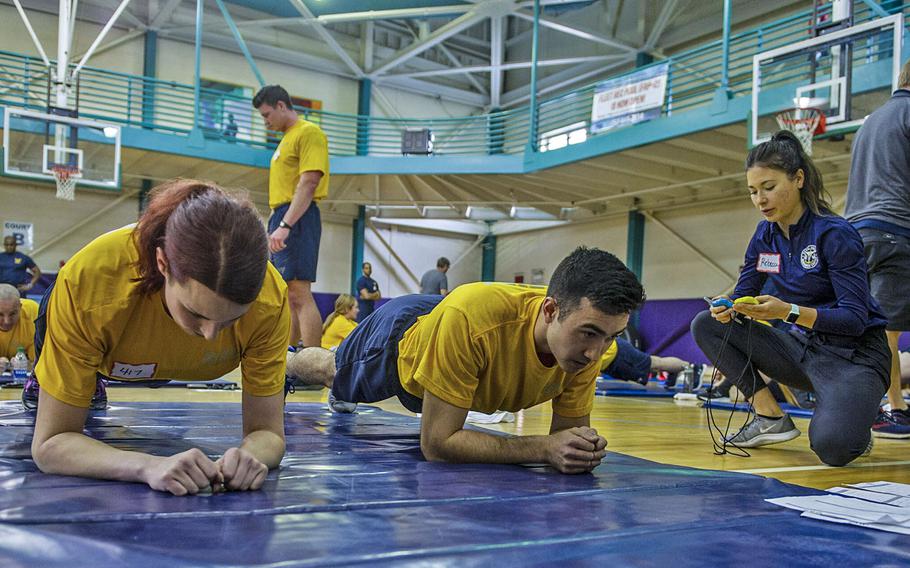 In a March 10, 2020 photo, an instructor explains the proper technique for a plank as part of a Navy Physical Readiness Test Evaluation Phase at Naval Station Norfolk, Va. (Erika L. Kugler/U.S. Navy)

WASHINGTON — The Navy is changing its fitness test in the spring, adding the forearm plank to better assess a sailor’s core strength and rowing as an alternative cardiovascular exercise, the service announced Wednesday.

“Feedback I've received from the fleet as I've traveled… is, for the most part, sailors are excited and they're just ready to start,” said Senior Chief Petty Officer Eric Anderson, who is with the Navy Physical Readiness Program at the 21st Century Sailor office based in Millington, Tenn.

The Navy is responding to feedback from sailors who asked for a test that better determined core strength and relates more to the work that they have to do on ships, Anderson said.

The Navy’s Physical Readiness Test, or PRT, is typically conducted twice a year for sailors in a spring and fall cycle, or time frame, and involves three events: pushups, forearm planks replacing curlups, and a cardio event, such as a run, swim or now the row exercise.

The fitness test cycles in 2020 were cancelled due to the coronavirus pandemic. In 2021, the Navy will only have one cycle for sailors to take the test, between March 15 and Sept. 15, according to the service. March will be the first time sailors will have to do the forearm plank and can choose the row event.

"I am excited about these changes coming to the Physical Readiness Test as I believe the plank is a better measure of core strength, it’s easier on the back, and I think it is safer in a [coronavirus] environment,” Vice Adm. John Nowell, the chief of naval personnel, said in a statement. “Additionally, the row is a great full-body exercise and it’s easy to fit a rower onboard ships. These changes will challenge us to be better, stronger, and a more fit Navy.”

First mentioned in 2019 by former Chief of Naval Operations Adm. John Richardson for the PRT, the forearm plank and row were then tested by 500 sailors at three locations: Joint Base Pearl Harbor-Hickam in Hawaii, Naval Station Mayport in Florida, and Naval Station Norfolk and Joint Expeditionary Base Little Creek-Fort Story in Virginia. The tests helped determine what the appropriate standards needed to be for each event.

The test takers “were happy that a change was coming,” Anderson said.

The forearm plank was chosen to replace the curlup because curlups also risks aggravating the lower back whereas the planks actually strengthen those muscles, Anderson said.

“When you're pulling on that line to moor the ship or carrying a box to put it in the storeroom, the stabilization of your core is where you're developing all that power from. So being able to do that and test that and make sure that our sailors have a strong core is going to help make us more ready and healthier,” he said.

The addition of the 2000-meter row provides sailors another cardio option for the test, along with a 12-minute stationary bike ride, a 500- or 450-yard swim, and a 1.5-mile treadmill run. The row is a low-impact exercise that puts less stress on the legs and engages about 80% of the body’s muscles, according to a Navy fact sheet on the PRT update.

For the forearm plank, sailors can use a mat or pad, however they have to be fully on the mat, not just placing their forearms on it. The time limit is based on age groups. For example, an 18-year-old has to hold a plank for 3 minutes and 40 seconds in order to receive 100 points, the highest score. Older sailors can receive 100 points with less time.

The plank standards are based only on age and not separated out for men or women, a carry-over from the curlup, Anderson said. It’s also because abdominal strength is similar for men and women, he said.

If a sailor fails in the plank event during the 2021 test cycle, he or she will not fail the PRT, but will still be required to pass the pushups event and the cardio event.

The 2000-meter row is done on a rower machine and the Navy is recommending sailors train on the machine prior to the test to understand how they need to pace themselves to pass.

“One thing we saw during the testing was, they would get, say 500 meters into the test and realize that this is not as easy as I thought it was going to be. And we don't want sailors failing just because they didn't know what to expect,” Anderson said.

If a sailor does not pass the row event, they do not get the same leeway as with the plank event because they pick their cardio option unlike the mandatory plank event, Anderson said. They could be offered another attempt at another cardio event by the fitness leader overseeing the test.

While going from pushups to planks might seem too difficult for sailors to do effectively back to back during the test, Anderson said the decision was based on sailors going through an entire PRT and so the standard reflects the fatigue of going through each event.

Anderson offered a tip on the forearm plank. He said sailors need to remember to keep their head in a neutral position looking at the floor during the plank, and not to look up at the clock or around the room in order to reduce exertion on the body.

Anderson also recommended sailors wanting to start training for the plank should make the time to practice the plank even if they can only hold the position for 30 seconds, in order to start building up their core strength.

“So our advice to them is get a workout routine, the best you can right now. The good thing about planks is even if they're on board a ship or in a barracks room, they can still do the plank without having to go to the gym,” he said.