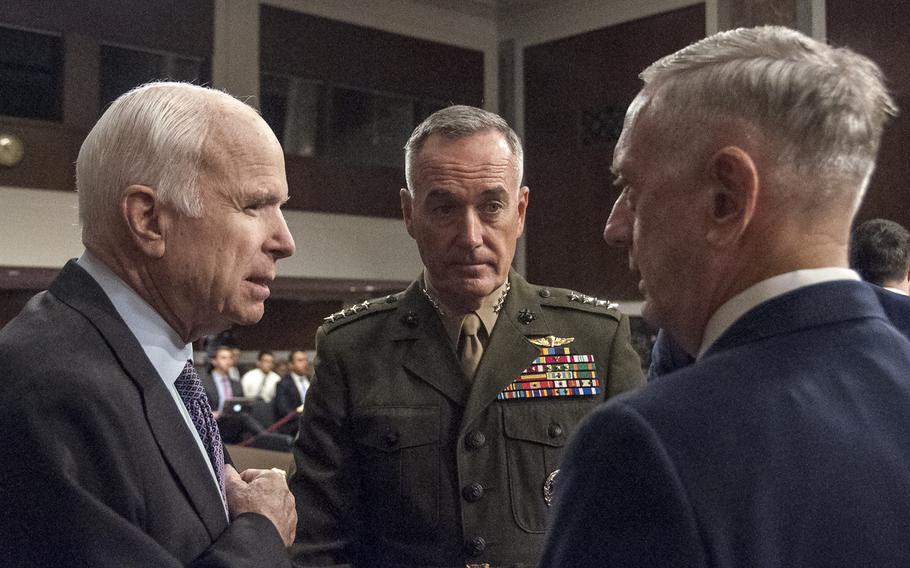 Chairman of the Senate Armed Services Committee, Sen. John McCain, R-Ariz., speaks with Chairman of the Joint Chiefs of Staff Gen. Joseph Dunford and Secretary of Defense Jim Mattis prior to the start of a hearing Tuesday, Oct. 3, 2017, on Capitol Hill in Washington. (Carlos Bongioanni/Stars and Stripes)

WASHINGTON – Even as Sen. John McCain began his battle against brain cancer in July, the Arizona Republican and powerful chair of the Senate Armed Services Committee was quietly waging another kind of war.

That month, President Donald Trump’s Pentagon nominees going before McCain’s committee came to a screeching halt, triggering a more than 3-month drought for the effort. The committee didn’t hear from another slate of new candidates for top military posts until this month.

McCain would later reveal he was battling the Pentagon and the administration for more transparency on a slew of military issues, and was holding the line on nominees facing potential conflicts of interest because of defense industry backgrounds.

“The reason these nominations have not been acted on as rapidly as possible is because failures of communication between this committee and the Pentagon, which is a shame, since I have known them for many, many years,” McCain told a new group of Pentagon nominees during a Nov. 2 hearing – the first such meeting since July. But “we intend to move your nominations through as soon as possible. We need you to get to work.”

In early October, McCain said he was holding Pentagon nominations hostage as a result of a disconnect between Congress and Pentagon administration officials. McCain railed that the officials, including longtime friend and Defense Secretary Jim Mattis, were not forthcoming on several major concerns, including two deadly Navy ship collisions this summer, a change in war strategy in Afghanistan under loosened rules of engagement and the ambush last month in Niger that killed four American soldiers.

By late October, the committee saw a turn of events with several public and closed hearings on the Navy ship collisions, war strategy and Niger. A threat of a McCain subpoena on the Niger ambush triggered a personal Capitol Hill visit among Mattis, McCain and Sen. Lindsey Graham, R-S.C.

“The war is morphing,” Graham said after the Mattis meeting.

McCain and other Armed Services Committee members subsequently said they were pleased with the new level of cooperation from the Pentagon and would lift the holds.

“We are moving this process along,” McCain said during the most recent nominations hearing Thursday. “We will be holding hearings and hopefully moving forward with this as quickly as possible.”

The committee advanced three additional nominations to the Senate floor as it heard from four more Trump nominees. The Senate committee approved by voice vote Robert Behler to be director of operational test and evaluation, Thomas Modly to serve as undersecretary of the Navy and James Geurts to be assistant secretary of the Navy for research, development and acquisition.

This month, the Armed Services Committee is poised to hear from 17 nominees – close to the same number who testified before the panel in the first seven months of Trump’s presidency.

By November, the administration had filled 17 of 54 primary Pentagon senior politically appointed positions, according to the Partnership for Public Service, a nonpartisan Washington think tank.

The administration has officially nominated 24 to Pentagon posts, but has yet to name 13 nominees for other vacant position.

But plenty of key positions remain without named candidates. Key vacancies include the Pentagon’s top lawyer, an inspector general and assistant secretary for manpower and reserve affairs.

At this point in the George W. Bush administration, 40 of these key positions had been filled, while Obama had filled 28, the Partnership for Public Service said.

There have been additional challenges for the Trump nominees.

McCain also said that a revolving door issue between the Pentagon and the defense industry was compounding concerns of nominee approvals. Last week, the committee approved former Raytheon lobbyist Mark Esper as Army Secretary – poised to gain the title – finishing up the top civilian spots for each service department.

He will also mark the last industry executive to advance as a Pentagon nominee, McCain has warned.

“I would be remiss if I did not reiterate my concerns about the number of nominees from defense industry filling out the leadership ranks at the Department of Defense,” McCain told Esper during his nomination hearing. “My reservations grew out of early consultations I had with the [Trump] administration about potential nominees, including yours and a handful of others. It was then that I decided I couldn’t support further nominees with that background.”

The process hasn’t been a walk in the park for other nominees either. Officially, three nominated individuals have failed the process, with at least one candidate who withdrew early in the process.

On Thursday, the committee passed for now on approving Dr. Dean Winslow to be Assistant Secretary of Defense for Health Affairs.

A retired Air Force colonel, Winslow made controversial comments as he testified on Tuesday about guns and abortion that appeared out of line with the Trump administration and Republican lawmakers. A committee staff member said McCain withheld a vote on Winslow’s nomination while members sought answers to additional questions concerning his comments.

During testimony, Winslow voiced support for the use of “therapeutic abortions” if the mother’s life is endangered. The military has long been banned from providing abortions in nearly all cases.

Winslow also went on to express horror that U.S. gun laws allow citizens to legally acquire military-inspired, semiautomatic rifles such as the weapon used in a mass shooting in a Texas church that left 25 people dead, including a pregnant woman, earlier this month. The killer should have been barred from owning a firearm after he was convicted of assaulting his wife and her baby in 2012 and was kicked out of the Air Force.

“I may get in trouble with other members of the committee,” Winslow said, but “how insane it is that in the United States of America, a civilian can go out and buy a semiautomatic assault rifle like an AR-15?”

McCain was obviously not pleased.

“Dr. Winslow,” he interjected, “I don’t think that’s your area of responsibility or expertise.”