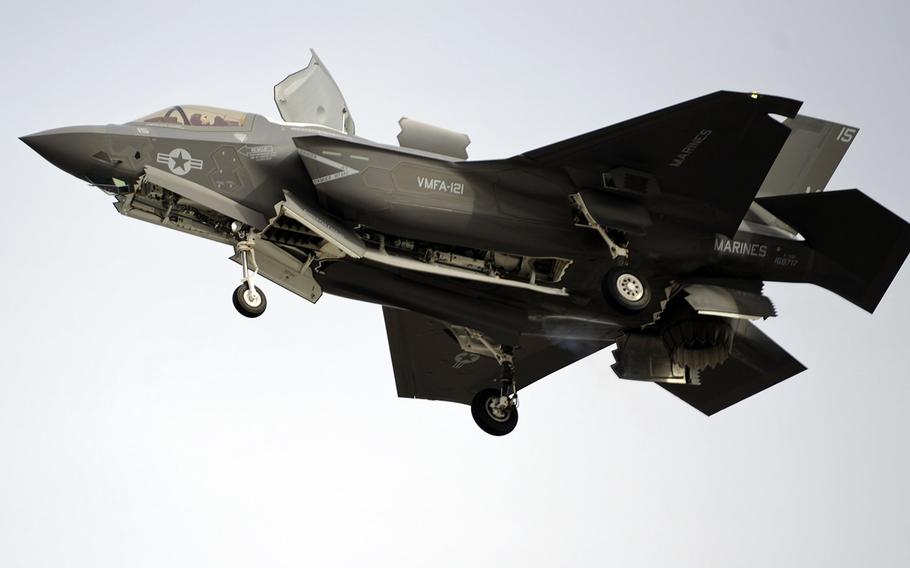 WASHINGTON — Marine Corps pilots of the first F-35 joint strike fighters scheduled to begin flying this summer will not be able to use night vision technology or carry more than four bombs and missiles, Defense Department officials testified in the House on Tuesday.

Overall, the first variant aircraft will have a range of lingering shortcomings when it goes into operation and will not be able to best the capabilities of the 1970’s era A-10 Thunderbolts it was designed to replace, according to Michael Gilmore, director of operational test and evaluation at the Defense Department.

The F-35 program began in 2001 and has since racked up nearly $400 billion in costs — one of the most expensive and troubled Defense Department acquisition programs. It has also led to a controversial plan to retire the A-10, a close air support stalwart that many believe provides crucial cover for troops on the ground.

“If F-35 aircraft are employed at night for combat, pilots will have no night vision capability available due to the restriction on using the current night vision camera,” Gilmore said in written testimony given to the House Armed Services Committee.

The so-called Block 2B version that will go to the Marines in July can only loiter over the battlefield for up to 30 minutes and will only carry two short-range air-to-surface bombs of the same type and two medium-range air-to-air missiles, according to Gilmore.

Future versions for the other service branches are planned to include a wider variety of weapons but still face extensive testing. The F-35’s loiter time is not likely to improve due to its engine and design.

The A-10 Thunderbolt, also known as the Warthog, can remain over the battlefield for 90 minutes, carry at least four air-to-surface weapons and use its powerful nose cannon for close air support of ground forces, Gilmore testified.

“This [F-35 variant] reminds me of something before the A-10 not something after the A-10,” said Rep. Martha McSally, R-Ariz., a freshman lawmaker and former Warthog pilot.

McSally said she was concerned about the lack of capabilities with the first F-35 variant, saying that weapons payload, loiter time over the battlefield, and the ability to take a hit from an enemy are key to the A-10 success.

Congress is now weighing the purchase of more F-35 Lightning II aircraft as part of the 2016 defense budget. The Government Accountability Office warned Tuesday that it may be a risky move due to the large amount of testing still needed to be completed to field future variants.

Many lawmakers are frustrated with the delays, cost overruns and technical problems but believe the 5th generation fighter jet is needed to retain American air superiority in the coming decades.

Rep. Loretta Sanchez, D-Calif., said some critics have called for the costly development project to be scrapped.

“However, we are past that decision point. We just need to make this program work,” she said.