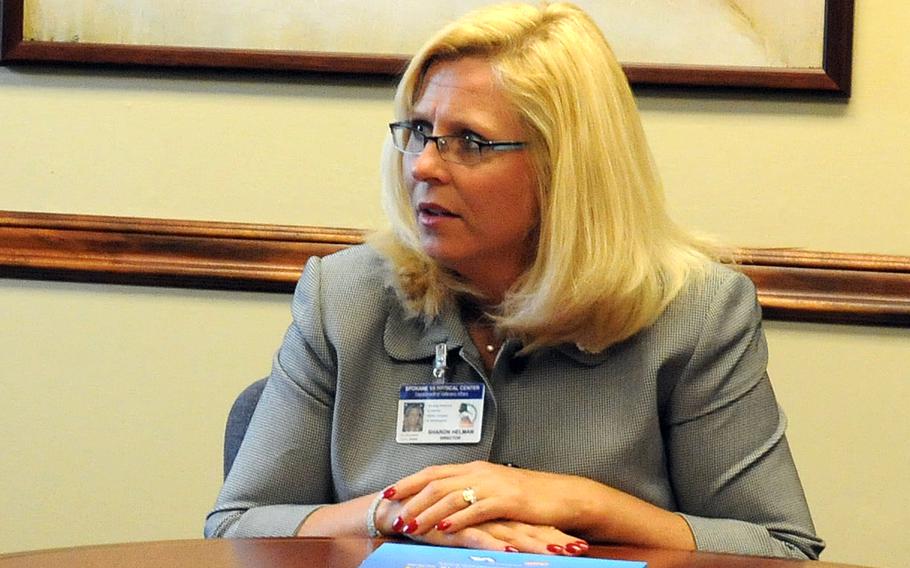 Sharon Helman, then-director of the Spokane Veterans Affairs Medical Center, is seen on May 14, 2009, attending a conference with Navy officials in Spokane, Wash. The Justice Department on Thursday, June 2, 2016, ruled that a law fast-tracking the firing of VA employees was unconstitutional. (Lewis Hunsaker/U.S. Navy)

WASHINGTON – The former director of Phoenix veterans hospitals who was at the center of a 2014 wait-time scandal scored a major legal win this week, shooting down sections of a law allowing the Department of Veterans Affairs to quickly fire misbehaving employees.

Lynch and President Barack Obama’s administration have sided with Sharon Helman, who is suing in federal court over her 2014 termination from the VA for accepting a trip to Disneyland and other gifts.

The decision by Lynch is new evidence of the VA’s faltering efforts to fire executives and employees when it deems them guilty of misconduct. It also undercuts a key reform passed by Congress in the months following the nationwide VA scandal, which erupted after a doctor in Phoenix said veterans were dying while waiting for care at the facilities overseen by Helman.

The Obama administration is sending the message that “the sanctity of a federal bureaucrat’s job is far more important than the health and well-being of our veterans,” said Sen. John McCain, R-Ariz., an architect of the law.

McCain blasted the president for originally touting and signing the law. Other Republicans also voiced outrage over the decision.

“The effect of this reckless action is clear. It undermines very modest reforms to our broken civil service system supported in 2014 by the president and an overwhelming majority of Congress,” said Rep. Jeff Miller, R-Fla., chairman of the House Committee on Veterans’ Affairs.

In the past, employees had the option of appealing their termination to the Merit Systems Protection Board – a panel appointed by the president -- in a process that could typically take months. But a joint VA-White House investigation during the wait-time scandal found a “corrosive culture” and widespread poor management at veterans hospitals and clinics across the country.

The findings added urgency to VA efforts to quickly root out bad employees. A $16-billion reform law passed by Congress in 2014 dramatically scaled back the appeals process, ordering an administrative judge to make a final decision within 21 days – with no appeal options -- on whether to uphold the firing.

But Lynch now contends the law violates the Constitution because it allows nobody to review the judge’s decision, including VA Secretary Bob McDonald.

The law “vests a federal employee with the final authority – unreviewable by any politically accountable officer of the executive branch – to determine whether to uphold the removal of a [VA] senior executive, which includes the power to overrule the decision of a cabinet-level officer,” Lynch wrote in a letter to Republican leadership in the House.

Sen. Johnny Isakson, R-Ga., chairman of the Senate Committee on Veterans’ Affairs, said the loss of the reform law will allow “the Merit Systems Protection Board to continue second-guessing VA’s efforts to discipline senior executives.”

Lawmakers have become increasingly frustrated with what they see as the VA’s inability to fire poor managers. New legislation has been working through the House and Senate, though there is no agreement yet between the two chambers on how much power to give the department in dealing with such cases.

The VA has suffered a string of embarrassing reversals after punishing employees, including a recent decision by a review board to reinstate VA executives Diana Rubens and Kimberly Graves. Both were implicated in a scheme to move themselves into higher pay jobs with less responsibility and collect hundreds of thousands of dollars in relocation bonuses.

This is the second legal victory for Helman. Last year, an administrative law judge ordered the VA to repay her $5,624 in wages that were garnished while she was on administrative leave and faced termination.

The department decided to fire Helman early in the 2014 scandal when federal audits found secret wait lists were kept in Phoenix and VA facilities across the country to hide long delays in veterans health care. But in December 2014, an appeals judge found it did not have grounds to fire Helman for the wait-time issues. Instead, she was fired for accepting thousands of dollars in gifts that included the Disney theme park trip and Beyonce concert tickets.