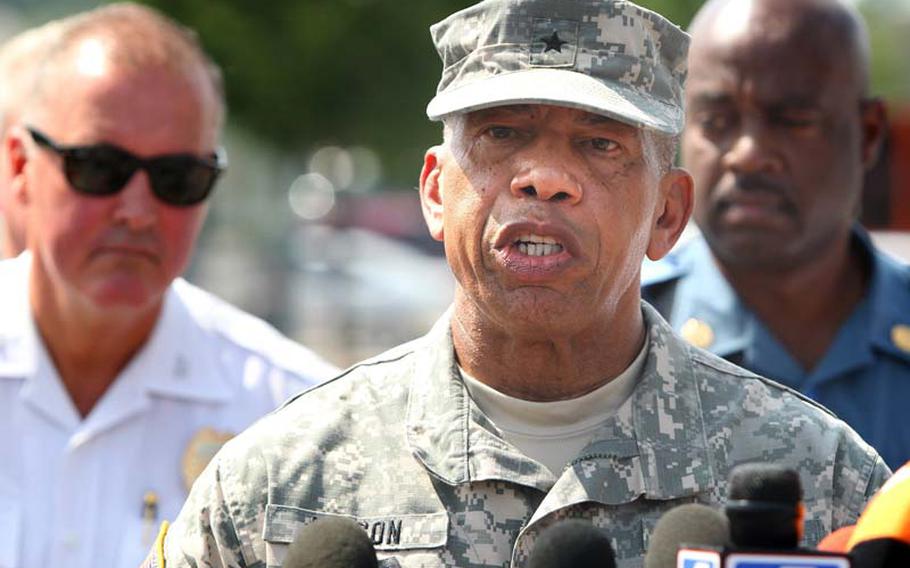 Brig. Gen. Greg Mason of the Missouri National Guard speaks to the media on Monday, August 18, 2014, to explain the capacity his soldiers will take in securing the Ferguson, Mo., protest area in the coming days. (Christian Gooden/St. Louis Post-Dispatch/MCT)

Brig. Gen. Greg Mason of the Missouri National Guard speaks to the media on Monday, August 18, 2014, to explain the capacity his soldiers will take in securing the Ferguson, Mo., protest area in the coming days. (Christian Gooden/St. Louis Post-Dispatch/MCT) 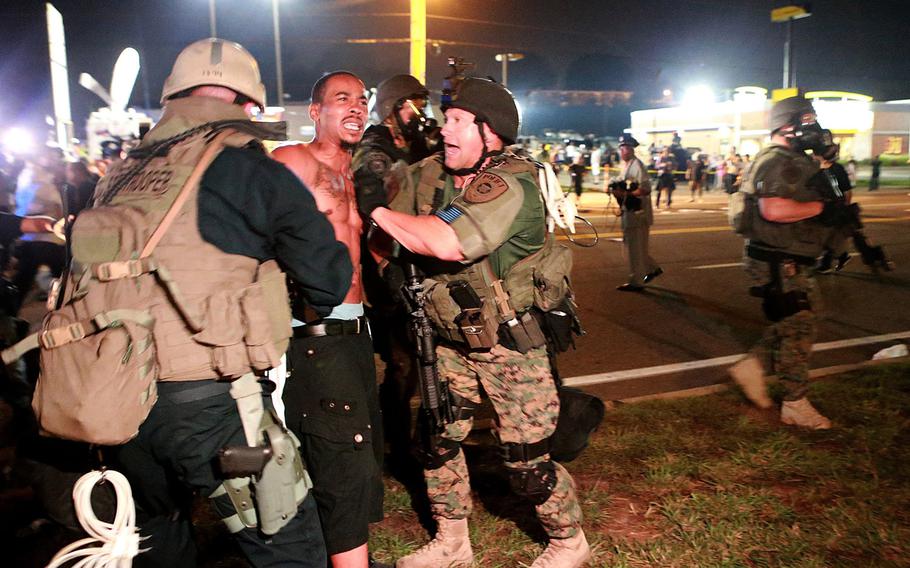 A protestor is arrested on W. Florissant Avenue during a clash with police on Monday, August 18, 2014 in Ferguson, Mo. (Christian Gooden, St. Louis Post-Dispatch/MCT)

WASHINGTON — Police arrested 31 people in Ferguson, Mo., after coming under “heavy gunfire” overnight, officials said Tuesday, as the deployment of National Guard in a very limited role failed to prevent a new night of violence in the racially charged town.

Capt. Ron Johnson of the Missouri Highway Patrol told reporters that police fired tear gas against protesters but did not use bullets. Two people in crowds of demonstrators were shot, but not by police, officials said.

Guard soldiers charged with the limited task of protecting the law enforcement command post were not involved in efforts to quell the violence, according to The New York Times.

Gov. Jay Nixon sent the troops to the town of Ferguson on Monday, explaining the move in terms more fitting to describe efforts to combat an overseas insurgency than domestic protests.

“Following coordinated attacks last night both on civilians and law enforcement officers, I signed an executive order directing the Missouri National Guard to help restore peace and order in Ferguson. The Guard’s immediate and limited responsibilities … are to provide protection, and ensure the safety of our Unified Command Center, which was the target last night of a coordinated attack. The Guard will concentrate its resources on carrying out this limited mission,” Nixon said in a statement.

Brig. Gen. Greg Mason, who is leading the Guard’s effort in Ferguson, said that his soldiers are “well-trained and well-seasoned” and “well-equipped” for their mission.

Scott Holste, a spokesman for Nixon, told Stars and Stripes that the troops are “primarily military police.”

Holste did not say how many are being sent to Ferguson. A spokesperson for the Missouri National Guard could not be reached to provide additional information.

Ferguson has been wracked by protests since the Aug. 9 shooting death of Michael Brown, an unarmed 18-year-old African-American, by a white police officer.

Nixon declared a state of emergency Saturday as the situation deteriorated, and a curfew was imposed on residents. The governor announced Monday that the curfew was being lifted.

In a statement Monday announcing his decision to deploy the Guard, the governor said that peaceful protests had been marred by “the violent criminal acts of an organized and growing number of individuals, many from outside the community and state, whose actions are putting the residents and businesses of Ferguson at risk.”

He described the attacks as “deliberate, coordinated and intensifying,” and charged the Guard with “restoring peace and order.”

“We must defend Ferguson from these violent interlopers so that the peaceful protests can operate in peace and the search for answers and justice [regarding Brown’s death] can continue,” Nixon said.

Of the 31 arrested as of 2 a.m. Tuesday, some were from as far away as California and New York, the Los Angeles Times reported.

At a White House news conference Monday, President Barack Obama weighed in on the situation.

“We have all seen images of protesters and law enforcement in the streets. It’s clear that the vast majority of people are peacefully protesting. What’s also clear is that a small minority of individuals are not. While I understand the passions and the anger that arise over the death of Michael Brown, giving into that anger by looting or carrying guns and even attacking the police only serves to raise tensions and stir chaos. It undermines rather than advances justice,” Obama said.

He also called on law enforcement officials to show restraint.

“Our constitutional rights to speak freely, to assemble and to report in the press must be vigilantly safeguarded, especially in moments like these,” he said. “There’s no excuse for excessive force by police or any action that denies people the right to protest peacefully. Ours is a nation of laws for the citizens who live under them, and for the citizens who enforce them.”

Local law enforcement officials in Ferguson came under fire when they deployed military vehicles, set up sniper nests, and armed officers with assault rifles in the days after the protests began. Their actions have stirred debate about whether police forces should be allowed to obtain surplus military equipment from the Defense Department through federal grant programs.

“One of the great things about the United States has been our ability to maintain a distinction between our military and domestic law enforcement. That helps preserve our civil liberties. That helps ensure that the military is accountable to civilian direction. And that has to be preserved,” Obama said in response to a reporter’s question.

“I think it’s probably useful for us to review how … local law enforcement has used grant dollars, to make sure that what they’re … purchasing is stuff that they actually need,” Obama said. “I think that there will be some bipartisan interest in re-examining some of those programs.”

When asked on Monday whether he agreed with Nixon’s decision to send in the Guard, Obama was circumspect.

“This was a state-activated National Guard [mission], so it’s under the charge of the governor. This is not something that we initiated at the federal level. I spoke to Jay Nixon about this, expressed an interest in making sure that if in fact the National Guard is used, it is used in a limited and appropriate way,” he said. “And I’ll be watching over the next several days to assess whether in fact it’s helping rather than hindering progress in Ferguson.”