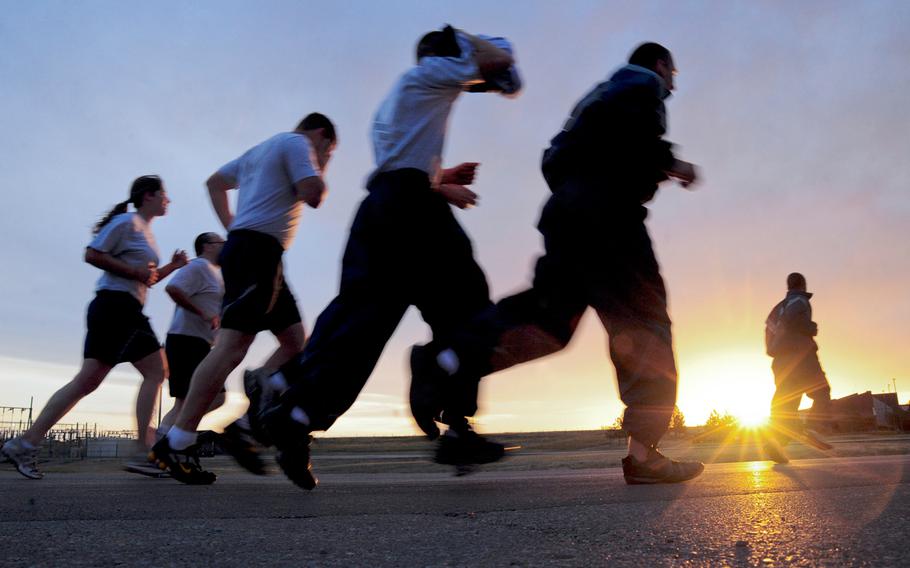 BALTIMORE — For three hours each work week, Bert Rice walks laps around Burba Lake at Fort Meade — part of a mission by the federal government to build a healthier workforce.

Rice, 76, a retired Army colonel and former Anne Arundel County councilman working as a civilian on the garrison staff at Fort Meade, is one of thousands of federal workers who participate in health and fitness programs designed to lower the government's health care costs, increase productivity and better recruit and retain employees.

The three-hour allowance is available for six months once in an employee's career to help set a foundation for healthful living. For Rice, it gives him a break from his desk, gets his blood pumping and helps him maintain a physically active lifestyle.

"It's great and really essential," said Rice, acting director of public works at Fort Meade. "My walking keeps me active, moving. Every time I get a chance to walk — I do."

Services are designed by individual agencies. Some provide on-site gyms or access to nearby fitness clubs, while others offer walking groups, weight lifting instruction and fitness assessments that measure a worker's ability to run a mile or do a push-up.

At Fort Meade, Deputy Garrison Commander John Moeller says, civilian employees may choose from several physical fitness programs. About 1,000 of the 56,000 men and women on the Army base are part of the garrison staff, which maintains the building and grounds and provides emergency and security services.

An exercise regimen is a job requirement for active-duty service members.

In addition to the three-hours-per-week allowance for on-the-clock exercise for six months, the Army gives civilian workers free access to two gymnasiums with basketball courts, treadmills and other machines.

Rice has won bronze, silver and gold medals for the active lifestyle awards.

He walks as many as 14 miles a week, including exercise on his own time. It's the latest workout routine in a lifetime filled with exercise, including 30 years of Army workouts, six marathons and a childhood spent on a sugar beet farm in Montana.

"It does encourage folks and should be an encouragement to maintain their fitness as a preventative measure," Rice said.

The Department of Defense isn't the only federal agency offering wellness initiatives.

And, she said, "healthy employees tend to be happier."

An annual offering is "Commit to be Fit," a one-month program that drew 12,000 employees last year. The program challenges employees to pledge to exercise for 30 minutes a day for a certain number of days during the month. Barry said workers can keep an online journal, team up with co-workers and share success stories.

The Defense Department's efforts are centered on a directive from the president, the National Prevention Strategy, launched in 2011. The military aspires to be a national leader in building a "prevention-oriented society," said Laura Mitvalsky, portfolio director for health promotion and wellness at the Army Public Health Command.

The Defense Department launched the Healthy Base Initiative as a pilot program at 11 military installations and two other defense sites earlier this year. None are in Maryland, but Mitvalsky said Aberdeen Proving Ground helped develop some of the elements.

"Our Army leadership is really engaged at all levels to assist and create these [healthier] environments," Mitvalsky said.

Treatment and loss of productivity related to obesity and tobacco use cost the Defense Department $3 billion a year. Failure to meet weight standards is a leading cause of involuntary separation from the military, and obesity in America may be limiting the Defense Department's recruitment efforts.

"The business of changing lifestyles takes a community-wide approach," said Dr. Jonathan Woodson, assistant secretary of defense for health affairs. "We need to make sure you have the tools available to succeed. Organizations that look the other way fail their people."