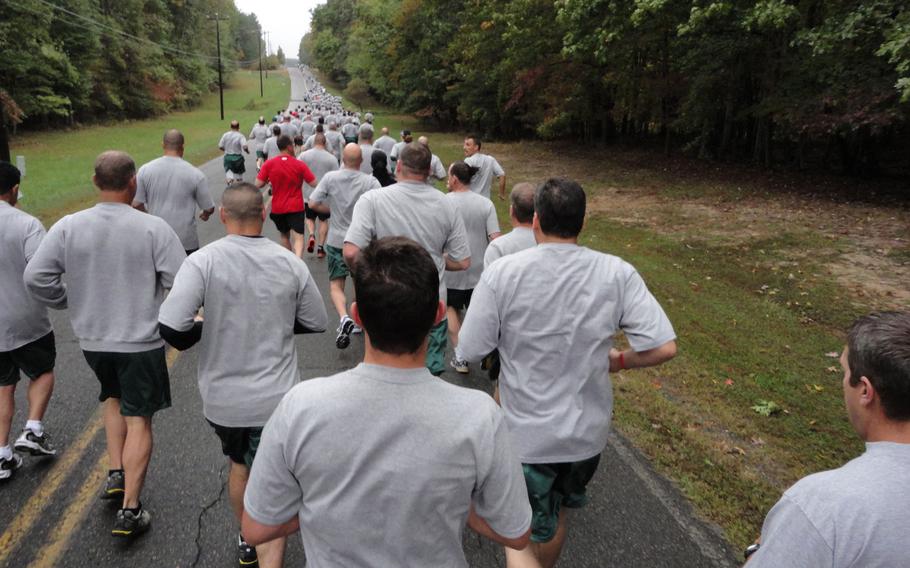 FBI academy students take part in a 6-mile run called the 'Yellow Brick Road' toward the end of their training. (FBI.gov)

For the first time in 16 years, the FBI is requiring that its agents pass a fitness test.

The agents, FBI director James B. Comey said in October in an internal memo to agents that was obtained by The New York Times, are symbols to Americans of what is “right and good” about the country. “I want you to look like the squared-away object of that reverence. I want the American people to be able to take one glance at you and think, ‘THERE is a special agent of the Federal Bureau of Investigation.’ ”

The tests, which started at the end of last year, are a return to a tradition begun by the bureau’s first director, J. Edgar Hoover, who obsessed about his agents’ weight, as well his own, the Times wrote. More significantly, the tests are a response to concerns throughout the bureau about how its transformation after the attacks of Sept. 11, 2001, has put more stress on the agents and given them less time for fitness.

After 9/11, many agents who were accustomed to working normal hours and had spent their entire careers investigating crimes such as gang violence or drugs — work that took them into the field to make arrests — began working 20-hour days as the FBI changed its primary mission to fighting terrorism, the Times noted. Many agents went to Iraq and Afghanistan. Many took more desk-oriented jobs related to cyber and intelligence.

The FBI’s 13,500 agents worldwide have until October to take it and the results will be included on their annual performance reviews, according to the report. The test is designed to ensure that agents can move quickly during a mass shooting, chase suspects and restrain them if they resist arrest. There are no weight limits, but agents have to achieve certain requirements in four different exercises depending on their age and gender. The threshold to pass is not nearly as high as it is for military commandos or hostage rescue-team members.

Direct comparisons cannot be made, but the FBI test standards do seem to be in line with the U.S. military’s rank and file.

The most challenging part of the test, FBI agents told the Times, is that they get only a five-minute break between exercises.