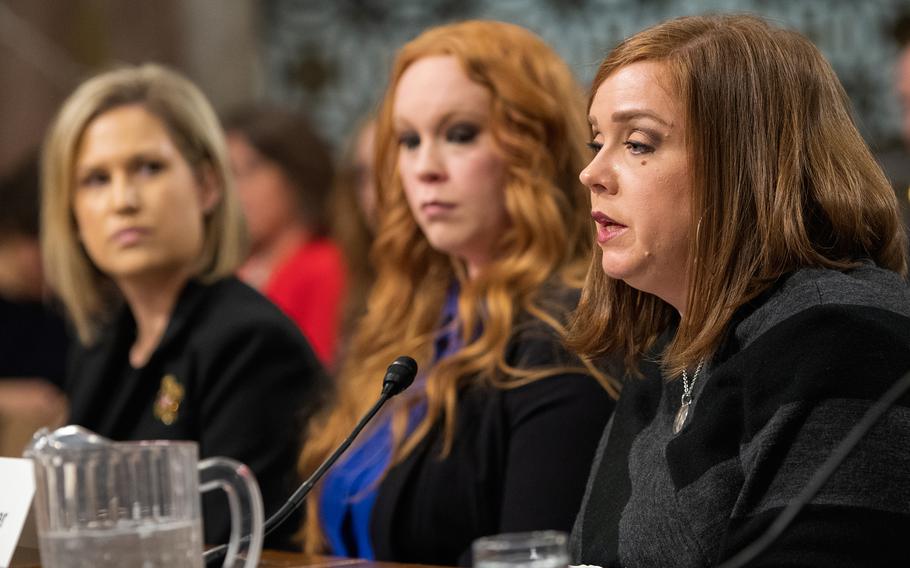 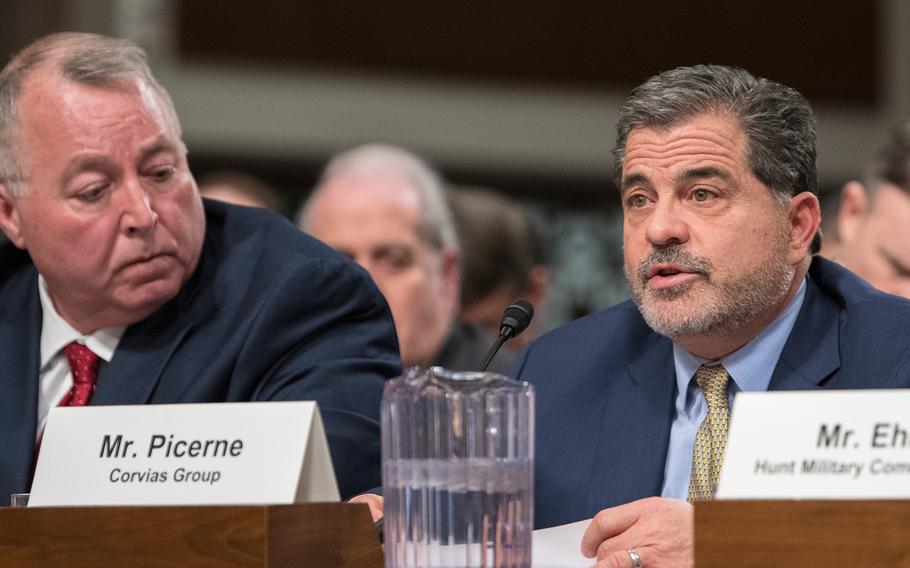 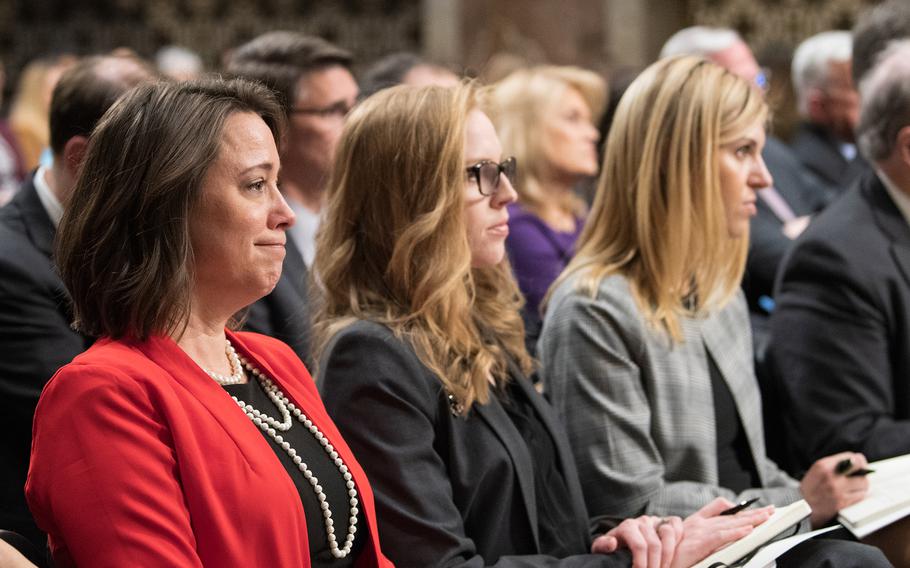 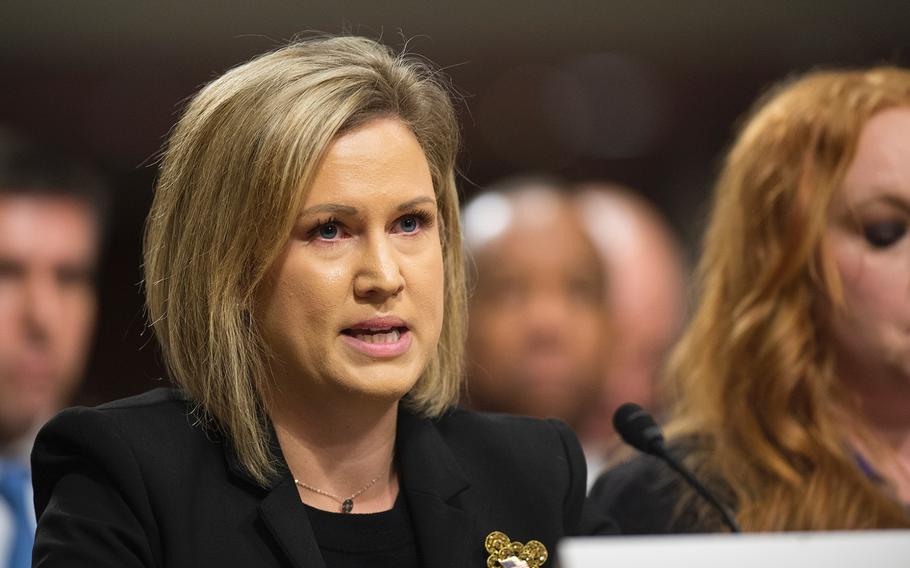 This is the alarming world of dilapidated military housing today.

On Wednesday, some families who have suffered with these residential nightmares told their stories on Capitol Hill.

“Our military families do not deserve this after all the sacrifices they make,” Janna Driver, the wife of an active-duty Air Force servicemember and mother of five children, told lawmakers during an extensive Senate hearing on military housing problems. “It is criminal. It is unbelievable the extent of this cover up.”

Driver joined two other military spouses during the more than three-hour hearing to plead for help as they detailed years of battles with deteriorating housing conditions, subsequent illnesses and extensive bills.

Private military housing executives and top military officials also testified before the joint subpanel hearing for the Senate Armed Services Committee. They said they are now addressing the concerns.

“We let down some of our residents,” said John Picerne, founder and chief executive officer of East Greenwich, R.I.-based Corvis Group, which manages military properties. “I’m sorry and we are going to fix it.”

“We must and will do better,” said Robert McMahon, assistant defense secretary for sustainment.

Several witnesses and lawmakers agreed Wednesday that the residential horror stories can be traced back to the 1996 military housing privatization initiative that let contractors take over management of the residences. Previously, the military managed these properties.

“We have a real problem here,” said Rhode Island Sen. Jack Reed, the ranking Democrat for the Armed Services Committee. “Here we are 20 years later, there is a clear disconnect between what has been promised by the companies… and the reality of what has been provided to military families.”

A survey released this week found 55 percent of private military housing residents were dissatisfied with where they are living, noted Sen. Jim Inhofe, R-Okla., chairman of the Armed Services Committee.

The Military Family Advisory Network, which advocates for servicemembers and their families, received nearly 17,000 responses to their survey on military housing in a week. Forty-five percent said they had a neutral or favorable housing experience.

“We’re going to get to the bottom of this,” Inhofe said.

The senator said the committee will work with the Government Accountability Office as well as the Defense Department Inspector General as they conduct their own investigations of military housing.

The efforts were launched after a December series by Reuters detailing the disrepair found at military housing properties across the United States. Subjects of the series, such as Driver, also recounted battles with the private companies that manage military housing now.

“They are covering up, painting over mold, threatening military members with their command, using scare tactics and intimidation, lying to us and making the problems worse,” Driver told Senators of her housing company Balfour Beatty Communities. “And now, it is out of control.”

Driver’s family went from no debt to owing $40,000 after a three-month battle over homes plagued with toxic mold and other concerns.

“Inside the walls tell a different story”Driver and her family battled a series of illnesses before they discovered in August an extensive mold contamination in a utility room.

“On the surface, these homes appear to be flawless but inside the walls tell a different story,” she said.

When Balfour Beatty Communities, based in Malvern, Pa., moved the family into a new home, they found a new case of mold, filthy floors, stained furniture and bug infestations.

Driver said she now suffers from chronic breathing issues and blurred vision. Her family takes supplements and prescriptions daily, with no end in sight.

“We will likely suffer from the effects of this for the rest of our lives, physically, financially, emotionally and mentally,” she said.

Crystal Cornwall said stories such as Driver’s are all too familiar. A Marine spouse, Cornwall launched a nonprofit called Safe Military Housing Initiative after running into her own residential nightmares and hearing of others.

Cornwall said in two years of researching the issue, she’s seen peeling lead paint at a residence at Fort Belvoir in Fairfax County, Va., a collapsing, moldy ceiling at a Camp Lejeune home in Jacksonville, N.C., residential mice infestation at Camp Pendleton in Southern California and water leaks at private homes at Keesler Air Force Base in Biloxi, Miss.

“I received hundreds of reports from military families of mold growth, rodent and pest infestations, moisture intrusion, lead and asbestos exposures, radon concerns, base contamination, and cancer clusters in their housing,” Cornwall, a mother of three, said Wednesday in her tearful testimony.

She and her family were based at Keesler Air Force Base when termites fell out of their light fixtures onto their beds. Later, when they were based at Camp Pendleton, they battled mold issues and unexpected move-out charges.

Cornwall said military families fighting for safe housing have too often been met with intimidation, personal attacks and attempts to discredit and silence them.

She implored lawmakers to consider amending or canceling the government’s contracts with these private companies, let families have new legal options to fight back and allow them the ability to withhold housing allowances until residences are safe and habitable.

“We ask that you act on our testimony and ensure military families receive safe, habitable, and functional housing and a better, more accountable way to resolve problems that arise,” Cornwall said.

Jana Wanner, an Army spouse based at Fort Meade, Md., said she ran into her troubles when her family worked with Corvias Group to select special housing that suited their daughter, who has a genetic illness.

Though the family joined a wait list five months ahead of a 600-mile move to Fort Meade, they learned their selected residence was gone five days before the move.

They moved into a townhouse on base as a last-minute replacement, though the stairs posed a problem for their daughter. They faced unexpected fees and rent increases as well.

Then, they discovered mold at the home and their daughter began to experience nosebleeds.

“We still live in these conditions,” Wanner said. “Our story is not unique, nor is it the worst.”

“We are committed to listening”To address the growing concerns, Chris Williams, president of Balfour Beatty Communities, said his company has since revamped its mold and moisture inspection policies and upped preventative services and resources for residents.

Balfour runs military housing operations at 55 installations with more than 43,000 residences and 150,000 residents.

“We’re committed to listening to our residents,” Williams said.

Picerne said Corvias Group is making organizational changes, boosting staff in several communities, revamping their mold and mildew policies and increasing reports to military officials. Picerne said the company, which manages more than 27,000 homes including those at Fort Meade, is also renovating properties and working to eliminate concerns such as lead-based paint.

At Hunt Military Communities, which owns interests in about 52,000 homes near 49 military installations. The company plans to invest $500 million in rebuilding homes, and through this work expects to see improvements in its properties.

Executives for Landlease Corp., which manages 40,000 at 20 installations, and Dallas-based Lincoln Military Housing, which manages 37,000 residences, also echoed new efforts to address fixes to their properties.

Jarl Bliss, president of Lincoln Military Housing, told lawmakers Wednesday that he will work with military families, partners and lawmakers to address any concerns with their operations and foster better communication and understanding.

“I regret when even one servicemember family feels we have come up short,” he said. “I deeply regret any of our families feel this way.”