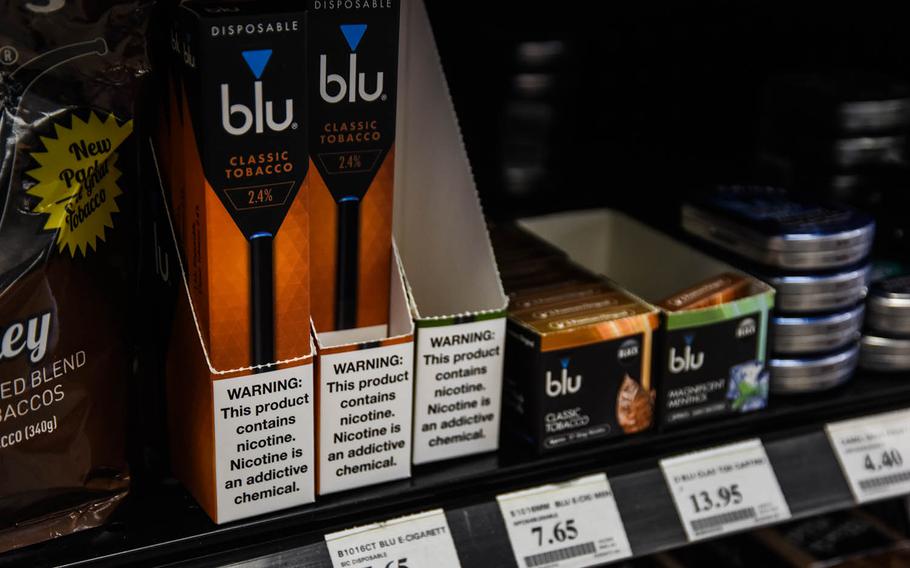 The Army and Air Force Exchange Service plans to pull electronic cigarettes and vape products from stores shelves by close of business on Monday, Sept. 30, 2019. (Theron Godbold/Stars and Stripes)

The move, which takes effect Monday, follows a plan announced last week by retail giant Walmart to stop selling the products amid concerns about links to severe lung disease.

The Army Public Health Center warned servicemembers Sept. 12 to avoid vape products after the Centers for Disease Control and Prevention said vaping may be linked to hundreds of cases of severe lung disease and at least six deaths in dozens of states.

“Until the U.S. Food and Drug Administration’s work with the Centers for Disease Control and Prevention and state health departments to collect information on e-cigarette and vape products is complete … the Army & Air Force Exchange Service is removing these products from its assortment, effective close of business Sept. 30,” AAFES senior public affairs manager Chris Ward said in an email Tuesday.

In 2018 exchange stores sold $1.8 million worth of vape products, down 11% from the previous year, she said.

“The category has never been more than 1 percent of tobacco sales for the Exchange,” she said. Vape products sold at AAFES stores include the brands blu and myblu made by Fontem Ventures and Vuse Vibe and Vuse Solo made by R.J. Reynolds, Mitchell said.

“Both manufacturers’ products are registered with the [Food and Drug Administration],” she said.

The recent vaping news didn’t have the support of servicemembers using the products at designated smoking areas at Yokota Air Base, the home of U.S. Forces Japan and 5th Air Force in western Tokyo.

Senior Airman Isaac Hoke, who was vaping at Yokota last Thursday, said he took up the habit four years ago and is now addicted.

“I don’t really see how they can say it’s more dangerous than smoking or [chewing tobacco] … I think it’s a much safer alternative,” he said.

“I understand what they’re saying [in the warning] but it’s like saying you shouldn’t drink or smoke,” he said. “It’s just one of those things you’re going to do.”

Stars and Stripes reporters Christian Lopez and James Bolinger contributed to this report.