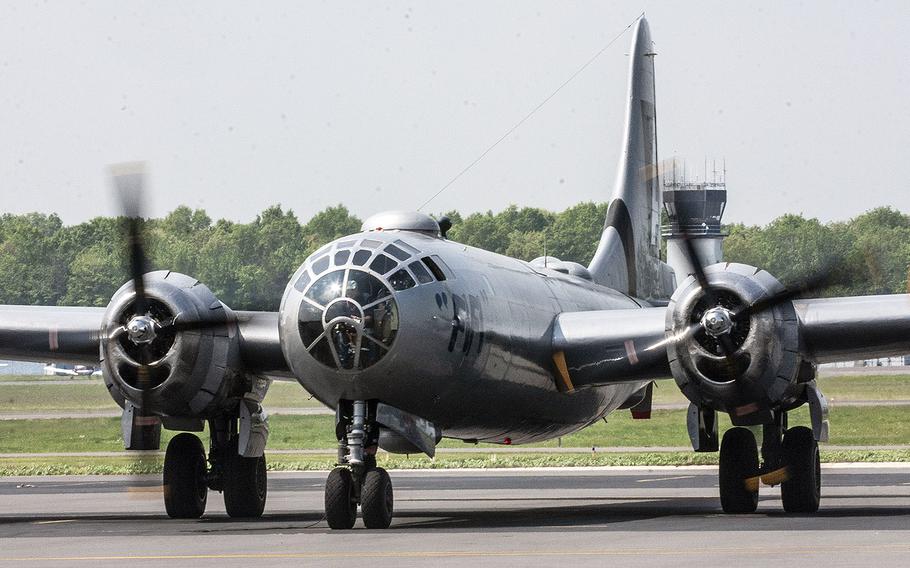 Buy Photo
The B-29 bomber "Fifi," seen here at Manassas, Va., during a 2014 flyover event, is among the dozens of planes that were scheduled to take part in the Arsenal of Democracy Flyover when it was originally scheduled for May. (Stars and Stripes)

Buy Photo
The B-29 bomber "Fifi," seen here at Manassas, Va., during a 2014 flyover event, is among the dozens of planes that were scheduled to take part in the Arsenal of Democracy Flyover when it was originally scheduled for May. (Stars and Stripes) 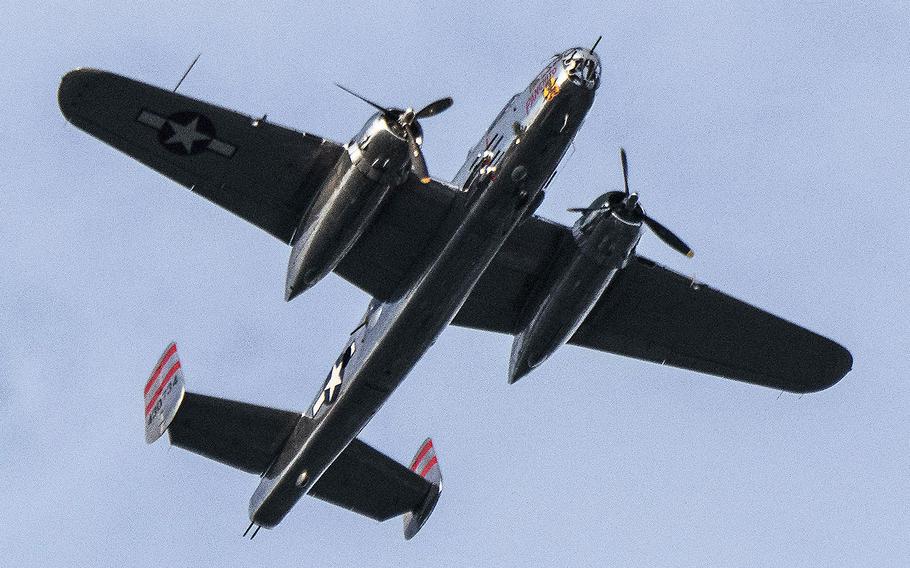 Buy Photo
The B-25 medium bomber "Panchito," seen here flying over northern Virginia on its way to the Salute to America Flyover in July, is among the dozens of planes that were scheduled to take part in the Arsenal of Democracy Flyover that was originally planned for May. (Joe Gromelski/Stars and Stripes)

WASHINGTON — The 75th Anniversary of the End of World War II Commemoration, which includes events in Washington, D.C., and Honolulu, Hawaii, will continue with adjustments and safety precautions to prevent the spread of the coronavirus, according to organizers.

The Arsenal of Democracy Flyover in Washington, D.C., was originally scheduled for Victory in Europe Day in May, but was rescheduled to Sept. 25 because of the pandemic.

The Victory Gala planned for Sept. 24 is canceled, as is a ceremony at the National World War II Memorial, said Leah Block, the vice president of marketing for the Commemorative Air Force, one of the organizations involved in the planning for these events.

Public viewing of the aircraft before the flyover will not happen, but the public can still see the planes at the Smithsonian’s Steven F. Udvar-Hazy Center in Virginia on Sept. 26. Block said the Smithsonian will be responsible for deciding which coronavirus-related rules to enforce for that event.

The events in Hawaii – which will include aerial parades and a dinner – will begin Aug. 29 and end Sept. 2, the anniversary of the official end of World War II. A ceremony will be held on the USS Missouri, the ship on which the official surrender documents were signed in 1945.

“Commemoration events are in place to pay tribute and thank our veterans of World War II, the Greatest Generation, for their service and sacrifice on behalf of the United States,” Mike Carr, president and CEO of the Battleship Missouri Memorial, said in a press release. “We have worked very hard to ensure this important anniversary would not go unnoticed and look forward to recognizing those who fought for our ultimate freedom.”

Mandatory masks, temperature checks and social distancing will be part of the prevention measures at the Hawaii events, according to the website. The Hawaii commemoration will also “require tickets to control the number of people in attendance,” the press release said.

World War II veterans attending events in Hawaii or Washington, D.C., will have a “travel bubble.” For Hawaii, that means a 14-day quarantine once arriving in the state, which is now required for all people entering Hawaii. For Washington, D.C., Block said there are ongoing conversations with veterans and their families about who will attend and how that will happen.

“We have had some [flyover] pilots come forward and say, ‘Well, if [the veterans] want to go I’ll bring them in my private aircraft.’ So they wouldn’t be flying commercially, and some of them live close enough where they could drive,” Block said.

Block said the Salute to America Flyover on the Fourth of July served as proof that the Arsenal of Democracy Flyover could still happen, even during a pandemic. She said it is a relief to be able to continue with the commemorative events.

“It’s such an honor. It’s just a really, really epic thing to be part of,” Block said. “And I know everybody really, really wanted to do it this year, particularly.”

The B-17 Flying Fortress, the P-47 Thunderbolt and the B-29 Superfortress are among the about 60 airplanes scheduled to take part in the September flyover. The aircraft will fly in various formations, which represent the war’s major battles. The aircraft are expected to be over the Lincoln Memorial at 11:30 a.m. on Sept. 25.