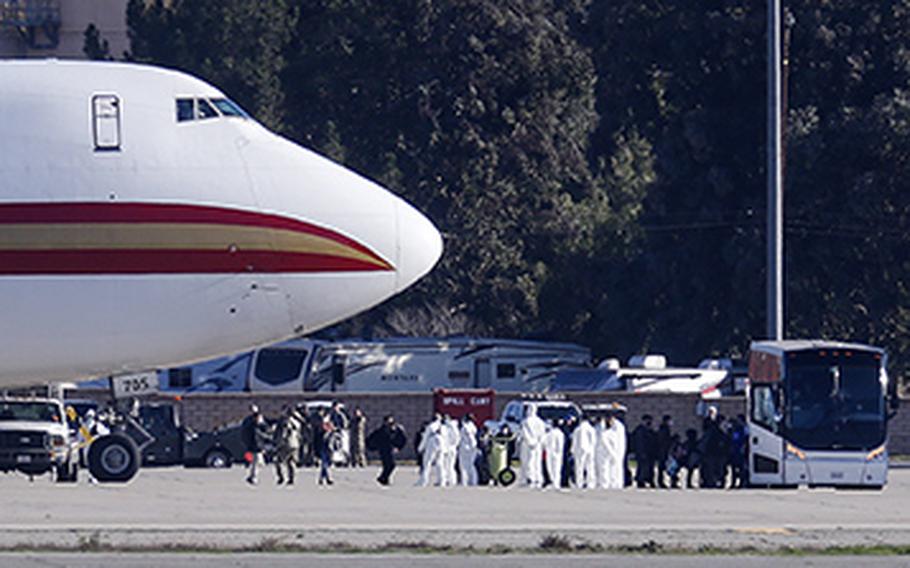 Passengers board buses after arriving on an airplane carrying U.S. citizens being evacuated from Wuhan, China, at March Air Reserve Base in Riverside, Calif. Jan. 29, 2020. (Ringo H.W. Chiu/AP)

WASHINGTON — An airplane carrying more than 200 Americans evacuated this week from Wuhan, China, the center of an outbreak of a deadly virus that has quickly spread across the globe, landed Wednesday at an Air Force reserve base in Southern California, Pentagon officials said.

The Defense Department will provide the evacuees temporary housing on March Air Reserve Base in Riverside, Calif., said Alyssa Farah, the Pentagon’s press secretary. Officials from the Health and Human Services Department will be at the base to observe and care for the evacuees, largely State Department personnel and their family members.

“HHS is responsible for all care of the evacuees, and DoD personnel will not be directly in contact with the evacuees and evacuees will not have access to any base location other than their assigned housing,” Farah said in a statement.

Wuhan is the center of the coronavirus outbreak that has killed at least 132 people and infected some 5,300 in China, The Associated Press reported Wednesday. The city, and several others nearby, have been locked down by the Chinese government in an attempt to slow the spread of the virus. Cases of coronavirus have been confirmed in more than a dozen other countries, including at least five in the United States, according to the national Centers for Disease Control and Prevention.

It was not immediately clear Wednesday why March ARB was chosen to house the individuals arriving from Wuhan. They were initially expected to land at Ontario International Airport, about 30 miles away, U.S. officials said.

March, a former active-duty Air Force base, is home to the 452nd Air Mobility Wing, the Air Force Reserve’s largest air mobility wing, which moves troops and equipment across the globe and provides refueling operations. The base also houses other units from the Air Force Reserve, the Army, Navy and Marine reserves and the Air National Guard, according to the Air Force. It is home to F-15 fighter jets, C-17 cargo jets and KC-135 air tankers, and it boasts a 13,300-foot runway, among the longest runways in the United States.

Farah said DOD officials determined the presence of the evacuees would not make any impact to military missions on the base. She said if any individuals show symptoms of the disease, they adopted procedures to securely transport them to a local civilian hospital.

The military has been monitoring the spread of the virus for more than a week in case it needs to take any measures to protect its personnel and their families, officials said.

“DOD will work closely with our interagency partners and continue to monitor the situation,” Farah said. “The department's primary responsibility at this time is the safety of our force, our families, and our base communities."

The CDC said Wednesday that the evacuees were screened before they left Wuhan, monitored throughout the entire flight by medical professionals, screened again in Anchorage, Alaska, where they landed earlier Wednesday to refuel, and would be evaluated once they arrive at March ARB. They will continue to be monitored at the base for an unspecified amount of time, according to a CDC statement.

“Our primary objective is to facilitate the safe return of these Americans while protecting the public’s health,” the statement said.

Medical officials in Alaska told the AP that none of the evacuees had displayed symptoms of the coronavirus during refueling, which include fever, coughing and in severe cases can cause shortness of breath or pneumonia.